As the heads of state and government for the 28 members of NATO gather in Warsaw Friday and Saturday, there are choppy waters ahead for the venerable alliance.

At the top of the agenda is the fraught relationship with Russia, which has been especially roiled since the invasion of Georgia in 2008, followed by the failed "reset" with Moscow, the invasion of Ukraine and the annexation of Crimea. The nations on the eastern edge of the alliance, especially the Baltic countries and Poland, remain nervous and unsettled by Russian behavior.

The tension has increased over the past year through a series of exercises held both by NATO and Russia, and Russia has reportedly scheduled hundreds of such exercises over the coming months. Russian military aircraft and warships have also been extremely aggressive in confronting NATO ships and planes over international waters and in international airspace, especially in the Baltic and Black Seas.

At the summit this week, NATO will likely make key decisions that will ratchet up the tension, notably continuing forward with a complex and highly capable ballistic missile defense system that the Russians insist is directed against their strategic rocket forces. NATO will also begin deploying four 1,000-soldier battalions to Estonia, Latvia, Lithuania and Poland on a rotating basis -- a move that Russia says is a direct violation of agreements executed at the end of the Cold War that precluded permanent stationing of troops on the border of Russia. Both of these actions will exacerbate the already volatile state of tension between NATO and Russia.

At the moment, neither NATO nor Russia appear willing to have a coherent dialogue.

As always, there are two sides to the conversation, and at the moment, neither NATO nor Russia appear willing to have a coherent dialogue. Along with military decisions, NATO will offer a high-level, ambassadorial set of talks with Russia. And the secretary general, former Norwegian Prime Minister Jens Stoltenberg, continues to express his willingness for an open conversation to reduce tensions. In all likelihood, Russia will continue to increase the level of military activity along its NATO borders, as President Vladimir Putin finds taking this approach plays well with his domestic constituency: his approval ratings remain stratospheric, despite the economic effects of U.S. and EU sanctions put in place following the Crimean annexation.

While some NATO countries will continue to press for a more realistic dialogue with Russia, the prospects are dim at the moment for progress, given the failure of the Minsk agreements to truly take hold and create a stable situation in southeastern Ukraine. The best hope for an accommodation, strangely, rests on events to the south: both Russia and NATO have a shared interest in creating stability in the Levant, destroying the so-called Islamic State and reducing the resultant migration, which includes radicalized jihadists. NATO will take some minor steps toward addressing the challenges on its southern border -- sending airborne early warning aircraft, warships and a small training mission for Iraqi forces -- but to really settle the challenges of Syria will require cooperation between Russia and the West.

Just as Russian participation was a key ingredient in stabilizing the Balkans 20 years ago, NATO and Russia will need to cooperate to achieve a political and diplomatic solution in Syria, sort out the future (hopefully quite limited) of the Syrian dictator Bashar Assad and put a stake through the heart of ISIS's territorial ambitions.

The best hope for an accommodation rests to the south: Russia and NATO have a shared interest in creating stability in the Levant.

Creating a fulsome conversation with Russia that would include addressing its concerns over the sanctions regime, completing the Minsk agreements and stabilizing Ukraine, coordinating military operations against ISIS and finding a path to removing Assad over time and stabilizing Syria -- all this will be on the minds of NATO leaders. But such a sweeping agreement will take time. The Syria peace talks led by U.S. Secretary of State John Kerry have stalled, despite his best efforts and yeoman work. It will not be realistic to fully address all of this until after the U.S. election.

In the meantime, NATO should press for a high-level conversation with Russia to reduce military confrontation in the Black, Baltic and Arctic Seas; continue to discuss Syria with both Russia and regional players; increase its own military engagement in Iraq against ISIS; encourage Russia and Turkey to reduce their acrimony (which appears to be happening as Putin and Turkish President Recep Tayyip Erdogan are again talking); try to create a larger zone of cooperation with Russia in Afghanistan, where interests in a stable situation align; and at least discuss Arctic cooperation (another friction point but a potential zone of coordination as well).

It is an ambitious agenda but the approach to Russia should be: "Confront where we must, but cooperate where we can." Building a stable, peaceful and coherent Europe must include Russia. A grand bargain with Russia is possible over time, but it will be rough sailing coming out of Warsaw. 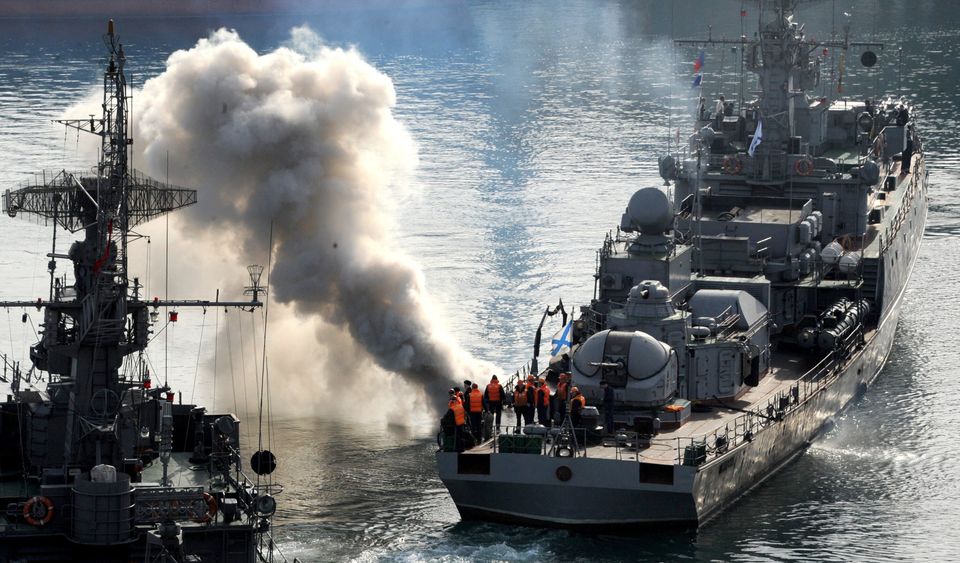 1 / 24
Russian navy sailors stand on the deck of their ship, the 'Suzdalets' ASW corvette, making its way into the bay of the Crimean city of Sevastopol on March 25, 2014. (VIKTOR DRACHEV/AFP/Getty Images)
Getty Images