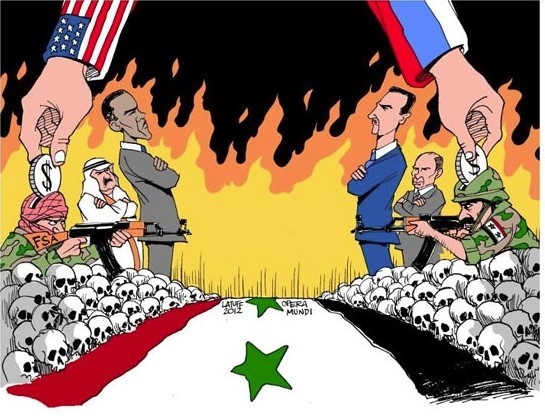 Conventional wisdom in the United States holds that Saudi Arabia and Turkey are right to enter the chaos defining Syria's civil war. After all, this is their region of the world, not ours. Yet the fallout could have dangerous implications for NATO, of which the United States is the dominant member.

Saudi Arabia has already sent troops and weapons, including fighter jets, to NATO-member Turkey's Incirlik air base. While the move highlights Saudis' anxiety over what's taking place on the ground in Syria, the desert kingdom's military leaders fail to grasp the perils ahead. Saudi Arabia and Turkey could easily provoke Russian military resistance, given Russia's own extensive military involvement in war-torn Syria.

I'm convinced Russia would escalate tensions if and when its fighter jets come under attack from advanced weapons purchased by Saudis from the United States, including surface-to-air missiles. Worse, if Turkey is supplying weapons and sanctuary for Saudi fighters, it could spark a full-scale NATO-Russia confrontation, embroiling yet other nations.

Such provocation by Saudi Arabia and Turkey -- both Sunni-led nations -- provides Russia some justification for deploying, if it hasn't already, far more sophisticated weapons, including its fifth generation fighter jets, advanced S-500 missile defense systems, and other high powered weaponry. Result: Syria becomes the battleground of a war pitting NATO powers against Russia. Imagine the toll in this horrifying scenario.

Let's look deeper at Russia's geopolitical motives, shall we? Russia's involvement in Syria goes beyond supporting Syrian President Bashar Al-Assad or fighting ISIS terrorists. Rather, it aims at dividing NATO and destroying Syrian rebels supported not only by the United States but also by Turkey, Saudi Arabia and Qatar. And don't discount the role Iran, a Shiite power, plays in all this. It provides fighters and military leaders on the ground in Syria to plan attacks against the rag-tag rebels seeking Assad's overthrow.

Of note: Iran recently purchased advanced Russian fighter jets and missile defense systems; all the reasons why the Saudis and Turks' military engagement in Syria will only result in more causalities and collateral damage, but no decisive winner.

With Turkey and Saudi Arabia expressing their intention of getting involved in this bloodbath, Russia and Iran will seize the opportunity to cement their alliance and further their own objectives, despite opposite trajectories. Are the Saudis and Turks biting off more than they can chew? Are they foolishly betting that Russia will suffer the same fate it had in Afghanistan in the 1980s?

Or are the Saudis and Turks being drawn into a trap with no way out? The answer to these questions depends on who you ask from both sides of the Atlantic.

Conversations swirling in Brussels and other Western capitals pivot on whether Turkey is actually pursuing yet another agenda -- targeting the neighboring Kurds -- rather than bolstering NATO interests such as limiting Russia's expansion and fighting ISIS terrorism. NATO leadership fears that whatever Turkey's motives are, it could trigger a major confrontation with Russia. Meanwhile, Russia is moving forward with its own plans targeting Syrian rebels.

One thing you can bet on: Russia will not withdraw from Syria until a political settlement regarding the future of Syria is achieved to its own satisfaction.

One must wonder what truly motivates Saudi Arabia and Turkey to embark on such a risky military venture that could (and would) soon turn into a bloody war without easy end. The Saudis and Turks want to ensure that Sunni rebels prevail (which I do not foresee) while at the same time sending a message to Iran that they will challenge Tehran's geopolitical aspirations.

In any case, this alliance between Turkey and Saudi Arabia will probably be short-lived. If history is any guide, Arab leaders talk more and act less; their sabre-rattling summits and conferences seldom amount to much. But all are mistaken if they think Russia will stand by and watch as Saudi and Turk ground troops march toward Damascus.

Of note: Mr. Putin threatens to use tactical nuclear weapons against Turkey if it launches a ground invasion of Syria.

This leads me to ask one specific question: Is Turkey, a NATO member, supposed military adventure in Syria aim at achieving its Sunni sectarian objectives? If so, could this explain why the Saudis are willing to sacrifice their own troops (unusual approach given its history of taking the back seat while letting US troops do the fighting for it) in support of this objective? The answer is yes to both questions.

One thing is certain: the quagmire in Syria could quickly turn into a global war. For now, I argue that both Saudi Arabia and Turkey want to get involved for different reasons. For the former, it's an ideological spat against Iran to avoid the expansion of Shi'ism. For the latter, it's the targeting of the Kurds once for all.

Washington needs to have a very straightforward talk with its allies, the Saudis and the Turks, about the long-term consequences to all. This is certainly no time for Sunni adventurism, especially if it counts on NATO involvement. The complete destabilization resulting could make what happened after the disastrous invasion of Iraq look like a geopolitical picnic by comparison.