Nepal has been in the news recently and for horrific reasons. If you are a member of a religious congregation or faith group, you have probably heard someone lift them up in prayer over the last few weeks. Their situation is terrifyingly awful and will probably stay that way for years. 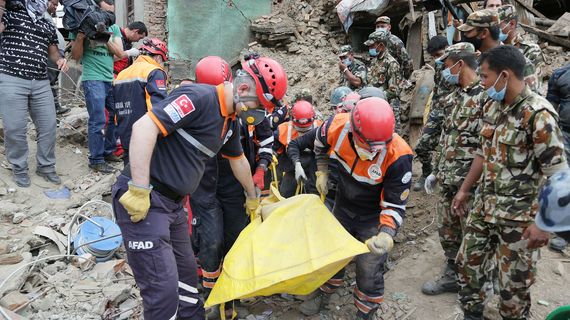 On April 15, Nepal was hit by one of the most devastating earthquakes in modern history. The quake (and its aftermaths) took the lives of over 9,000 people and wounded or destroyed the homes and towns and livelihoods of millions more. The numbers are so staggering they can easily sound like bumper stickers and statistics instead of mothers and fathers, sisters and brothers and children, all of whom deserved to live and love and have meaningful lives in the middle of some already incredibly difficult conditions.

Here are some of those statistics: According to a study recently released by the United Nations, twelve babies are born every hour in one of the earthquake-impacted regions of Nepal that doesn't have basic health care. Clean water, stable homes, basic roads, are all desperately threatened. Even before the earthquake, Nepal was ranked 145th out of 187 countries on the United Nations Human Development Index. In addition to having no ocean access, little arable farmland, and few easily accessible natural resources, it also has been stricken for decades with civil wars, palace coups, and corrupt leaders. All of which make economic development daunting under the best of circumstances.

There is one area of the crisis where you can help. It's an issue that few people realize and few in the media report on. That is, much of Nepal's "ordinary" attempts at economic development have been hindered for decades by an enormous and growing external debt.

That sounds geeky and complicated, but here is the breakdown of what Nepal owes bank and other lenders:

What that means in day-to-day money is that Nepal--again one of the poorest countries in the world--pays nearly $600,000 in debt payments every single day. To put that in perspective, it's helpful to note that the U.S. typically gives Nepal about $15 million a year in foreign aid. Since the earthquake, we have increased that up to $25 million. That's a lot of money. However, Nepal pays back, out of the country (to the World Bank, the U.S., etc.) over $27 million every six weeks! Imagine how many roads, homes, and schools, could be built with more than America's entire annual donation every month and a half. Even if you believe that some of that will be spent badly through corruption and faulty financial systems (less likely during such a disaster, but not impossible), it still would not be the absolute net loss to the economy and growth that it is now.

One organization that is in the forefront of lobbying the IMF and others to cancel those debts is the faith-based Jubilee USA Network. You may have read about them for their similar lobbying efforts in 2010, following the disastrous earthquake in Haiti. Haiti was also weighted down with external (and ancient) debts that were nearly impossible to pay off before the hurricane, and out of the question afterwards. And last year, during the outbreak of Ebola in West Africa, Jubilee (and others) pushed successfully to have the International Monetary Fund (IMF) establish a "Catastrophe Containment and Relief Trust" (CCR), which provides relief to poor countries after a natural disaster or health crisis. When the trust was established, it was able to cancel $100 million in debt for Ebola-impacted West African countries. Not bad work for a tiny organization of religious people that survives mainly off of individual donations and rummage sales from churches, synagogues and mosques.

If Jubilee is successful this time around, Nepal is likely to qualify for around $23 million from the IMF. That doesn't sound like much, but the IMF is a sort of "gatekeeper" for many of the other lending countries and agencies. If the IMF cancels major debts of Nepal, then the U.S., Europe, the World Bank, and regional development banks will follow suit. Hundreds of millions could be freed up for targeted and specific relief and development work.

Here are the guidelines for qualifying, according to the
IMF
. The country must be suffering from a natural catastrophic and:

There are few things that are more clear than that poverty-stricken and earthquake beaten Nepal qualifies for debt relief. And the IMF is to be applauded for creating the special trust and putting Nepal's case at the front for consideration. But you can help. This is one of those rare international tragedies where ordinary people can actually play a role. Here are three things you can do:

First, click here to sign a petition to the IMF to encourage them to open the CCR trust to Nepal. Nepal almost definitely qualifies for that, but if the IMF receives a significant number of names on a petition, it will be a serious encouragement to them in their deliberations.

Second, click here to learn more abou tthe tremendous work that this small-but-aggressive, under-the-radar organization does for economic justice and responsible lending and borrowing all around the world. They survive off of small donations from individuals like you and me and could use your support.

Third, click here if you would like to play a larger part: volunteer, host a speaker, start a chapter, etc. Do you belong to a religious congregation or a social service organization that would be interested in joining Jubilee as a group? Then go to their "Jubilee Congregation" page.

I know it sounds self-serving for me to say this, since I have been with them since their founding fifteen years ago, but they are a solid, responsible organization that has done amazing work over the years, and deserve your help. The good people of places like Nepal deserve it.