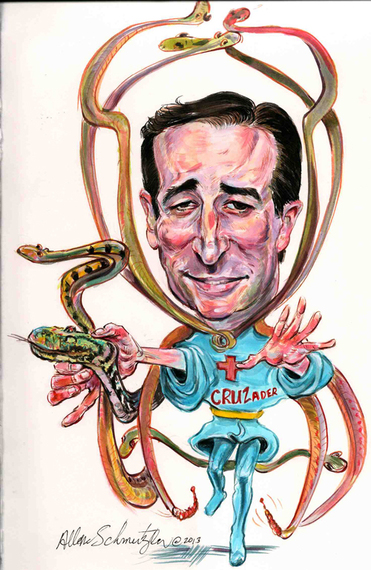 In the world legislated by a God of evangelical religious thought, fairness would rule. And, Rafael Edward Cruz would deserve to be treated as the flimflam circus act that he is, wagoning his vitriol around the country with snakes in hand and selling his snake oil remedies for societal pandemic problems as he selfishly self-promotes. Of course, his first, and his being-the-first orchestrated entry into the highest stakes 2016 political arena of wannabe president was a mockery as a canned event at some evangelical outpost of the societal mainstream, give me liberty or give me Liberty University, a venue so not democratic or representative of a forgiving god, that there was the threat of punishment of a fine of $10 for not flocking to fill his-the-philanderer's "no surprise" announcement.

In this fair world, Mr. Cruz would suffer the same "birther" indignities that mocked Barack Obama by the same right wing that Cruz cruises with. Sour bitter doubt of legitimacy of citizenship would bellow from the underbelly of Fox and its subservient clones relentlessly etching coded racial hatred until the claim fused into an embodiment of his illegitimate presidency. But Rafael is white Tea Party stock, and there will be no such mockery.

Rafael is a Tea Party Texas Senator elected in 2012 but goes by Ted Cruz, a foreign born-natural born American citizen, born in Canada in 1970. His father was born in Cuba, but at the time of Ted's birth, dad was working in Canada and was married to an American citizen born in Delaware. Rather than buy into the mockery of mocking what natural born citizenship means, Mr. Cruz deserves constitutional respect for who he is. The original parchment upon which the U.S. Constitution was written clearly gives Mr. Ted Cruz the inherent right to run for president. He is chronologically of age and meets the birth and residence requirements. However, we the people know he lacks every other anticipated criteria.

Mr. Ted Cruz has a wonderful American success story to share. We could all use another round of back-slapping congratulations and kumbaya collectiveness over how folks can come from diverse backgrounds to live the great American dream to beat the masses to the front of the line. But he has since being elected to national office nested his political fortress to the right of everyone. He mocks and mastectomies the glands that feed our Democracy. He speaks in hyperbolic levels of accusatorial nonsense without ever-lending a generous turn-the-other-evangelical-cheek to promote goodwill, kindness, and a seed to plant in the American Garden of Eden.

With the same evangelical fairness he professes, we need to kindly accept and welcome Mr. Ted Cruz into the great American Presidential Circus by holding him to his mockery and honestly fire back at him every bit of his hatred. Why does a person who has personally worked so hard to shut down government want to be government?

Ted Cruz has no clear path to become President of the United States. If he is serving his higher political design to push his party further right, fine. His way has been to disunite and ignite. Because I do not desire myself to sink to his lowest level of political schmaltz, I promise not to challenge his natural born citizen right to run and even hold the office of president. But first, he must prove he is not a natural born mockery, by finding the Wizard of Oz to receive his American heart and brain. Because despite his impressive academic credentials and pandering to the religious right, he has not demonstrated common core American intelligence or compassion worthy of any attention other than reverse-mockery.