North America has seen the world’s sharpest increase in the number of natural catastrophes during the past 32 years, a trend that in some respects is linked to manmade global warming, according to a report released Wednesday from the global reinsurance giant Munich Re. The study, which has not undergone scientific peer review, examined natural disaster losses between 1980 and 2011, finding that weather-related loss events in North America “nearly quintupled” during the period, compared to just an increase factor of two in Europe, for example. 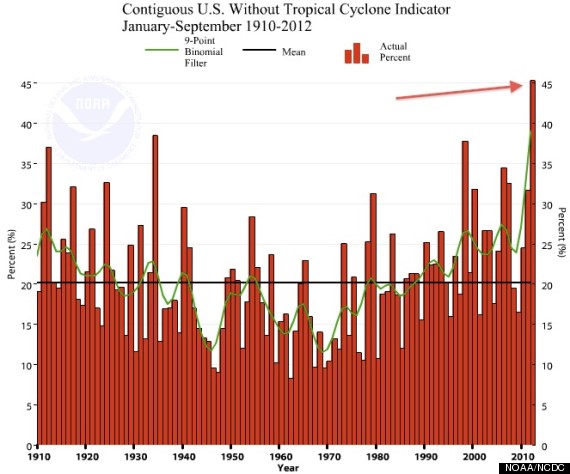 2012 has, so far, had the most extreme weather on record in the lower 48 states, according to the Climate Extremes Index. Credit: NOAA/NCDC.

The insured losses during the period was a whopping $510 billion. The largest loss event was Hurricane Katrina in 2005, which was the costliest natural disaster ever recorded in North America, and killed 1,322 people, the report said.

The new and most controversial finding in the report is that the upward trend in weather-related disaster losses is being driven in part by manmade global warming, since previous studies have shown that socioeconomic factors, such as population growth and urban sprawl, are behind this trend.

At the same time, however, studies have increasingly found that global warming is already making certain types of extreme weather events, such as heat waves and precipitation extremes, more likely to occur and more severe.

“A detailed analysis . . . indicates that the observed changes closely match the pattern of change in meteorological conditions necessary for the formation of large thunderstorm cells. Thus it is quite probable that changing climate conditions are the drivers,” Munich Re stated in a press release.

Thanks to large-scale heat waves and a massive drought, 2012 has been the most extreme weather year on record in the lower 48 states, as measured by the National Climatic Data Center’s Climate Extremes. Munich Re’s press release notes that the loss potential of drought and heat “are often underestimated” since they affect society more gradually than storms do.

Peter Hoppe, who heads up Munich Re’s Geo Risks Research Group, called the thunderstorm loss findings and other evidence in the report “an initial climate change footprint in our U.S. loss data from the last four decades.”

Footage of the tornado that struck Tuscaloosa, Ala. in 2011.

“Previously there had not been such a strong chain of evidence,” he said in a press release. “If the first effects of climate change are already perceptible, all alerts and measures against it have become even more pressing,” he said.

Studies of how global warming might affect severe thunderstorms and the tornadoes they can spawn have shown that a warmer world might lead to more thunderstorm activity, but fewer tornadoes, as the atmosphere becomes more unstable while wind shear, a crucial ingredient in tornado formation, declines. Researchers who have examined severe thunderstorm characteristics have not found significant global warming-related trends to date, in part because of problems in historical data sets.

However, Roger Pielke Jr. of the University of Colorado at Boulder, who is one of the leading researchers on hurricane and severe thunderstorm-related disaster loss trends, said that peer reviewed studies contradict Munich Re’s findings, which he called “speculative at best.”

For example, a forthcoming study coauthored by Pielke shows no upward trend of tornado losses in the U.S. since 1950, after adjusting for population growth and other factors. In fact, the study finds that normalized tornado damage has declined during the period. 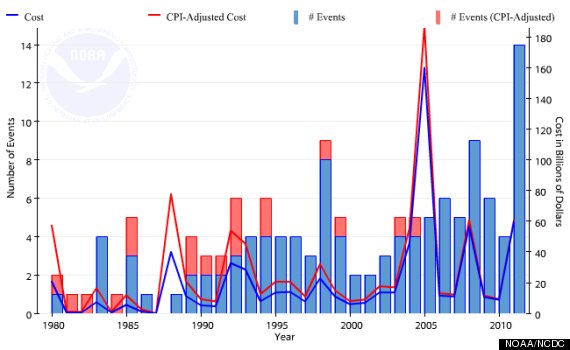 “The signal of human-caused climate change has not yet been detected in disaster loss data. Even so, humans affect the climate and a range of actions are worth considering in response. But the importance of climate change should not lead to a deviation from standards of scientific integrity,” Pielke said in an email conversation. He criticized Munich Re for including advocacy of climate adaptation and mitigation in the report and not submitting it for publication in a peer-reviewed scientific journal, saying that their actions have created the impression that they “have interests well beyond an accurate reporting of the science.”

The executive summary of the Munich Re report does state that socioeconomic factors will continue to be the main driver of disaster loss trends, even with the effects of global warming. "Viewed from an insurance perspective, the two combined result in increase loss levels, which will need to be reflected in increased, risk-adequate premiums," the summary said.

Climate change is a particularly acute challenge to insurance companies, which currently do not take climate change-related hazard trends into account when determining the cost of premiums. A recent report from Ceres, a nonprofit group that advocates for sustainable business practices, called attention to the threat that extreme weather events pose to the sustainability of the insurance industry, warning that some may face existential risks due to outsized exposure to climate change-related risks.

"Ceres has not had a chance to review the full report, but we support its general thesis that climate change is contributing to more extreme weather becoming the new normal, and that insurers and policymakers must wake up to this reality," Ceres spokesman Peyton Fleming said of the Munich Re report.

Munich Re, along with other insurers, has long pushed for the insurance industry to take an active role in encouraging society to take action to reduce the greenhouse gas emissions that are contributing to global warming.