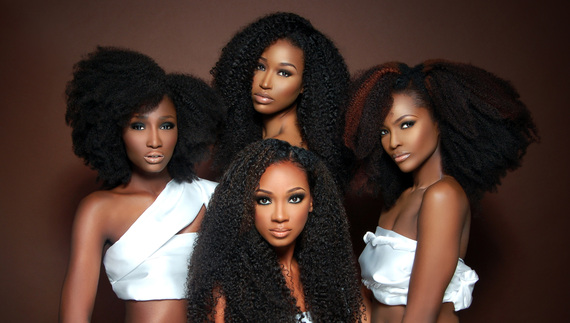 I've tried to remain neutral during this period of awareness for black women in America who were brought up to regard their natural textures with utter disdain because it betrayed the pint of blood needed to restore the dull to shiny.

Many years ago - around the time when Lauryn Hill and Macy Gray were the preferred staples - I wore my hair in its natural state.

But not because I was trying to feed into my rebel cause or start a revolution that was evidently too premature for its time.

I simply could no longer afford to pay for biweekly visits to the salon in order to nurture the life span of my relaxed tresses.

I was just being practical and normal. Nothing incredible or credible. I wasn't attempting to rediscover my roots or reclaim my long discarded heritage.

I never had an issue with my hair - even before I gave into the pangs of having chemicals doused on my head in order to guarantee that my mane would obey the wind the second I made my exit into the great outdoors.

I was blessed with thick, jet black, dramatic hair that at times gave me a massive headache especially after my mother shampooed and conditioned it and then insisted on combing out the kinks to prevent the onset of an entangled mess.

It wasn't fun. I remember holding on her to thighs as she diligently coerced my crowning glory into submission.

Afterwards she would expertly plait my hair into the style of her choice. That process also didn't feel so great, but afterwards - I looked immaculate.

So, that was the regimen. Keep your head down until it's over. Look up afterwards and amaze yourself with the beauty looking back at you.

I never hated the fact that I wasn't given the glossy, shiny, bouncy version of what I had been bequeathed.

I knew there was a less rigorous way of managing your mane but I accepted my way without protest.

Of course when I was college bound - I decided to try out the magic potion that supposedly tames your hair in ways that can be considered life changing.

It was nice to be able to run my fingers though my hair without road blocks. It was awesome to feel my airy strands move each time I took a step forward. And yes, having the lightness and ease without the burden of curdling the weight in order to draw away unwanted attention was refreshing.

Afterwards - I adapted to the reality that no way is the right way. I understood the power of vacillating between styles based on convenience and choice.

There was never a severe adherence to a particular option based on the need to emphasize race, creed or race.

No matter how my mane falls or sticks to the sky - my assignment as an Igbo girl from Abia State in the Eastern realm of Nigeria won't change or be woefully threatened.

The passing years have been both kind and harsh. On one hand I have managed to maintain the attributes that I've selfishly relied on since my early twenties but I've also lost quite a bit of myself along the way.

Premature aging and erratic hormones have led to the conversion of gorgeous black to wiry gray. My strands don't represent who I was or what I enjoyed about myself for most of my life.

The shock of it is slowly wearing off as I've been forced to accept that I am not my hair.

I emphatically get it colored to keep the silver growth the very expensive secret it has become.

And due to the extreme coarseness that accompanies gray hair - I bought into the hype of keratin treatments and basically wear a bone-straight look most of the time.

I miss my vibrantly unruly mass like crazy but I am okay with what I've got going on because it's just as beautiful.

I loved my natural hair when I had it because it was mine.

But most of all it felt right. Not because it was a trend, a movement, a cultural phenomenon or a moneymaking venture.

Because it was simply normal.