Remember the popular Disney movie Finding Nemo? Well, if the movie were true to biology, then after Coral (Nemo's mom) was eaten by the barracuda, Marlin (Nemo's dad) would have changed sex into a female, and then she may have even had incestuous relations with Nemo. Not exactly Disney material.

In humans and other mammals, sex is predetermined at conception by the inheritance of sex chromosomes. However, in many marine fishes, there are no sex chromosomes. Sex is not fixed at birth. Instead, the brain influences sexual development depending on the social environment. Many species of fish can reproduce as a female first and then change into a male (or the other way around) as their position in the dominance hierarchy changes from beta to alpha or alpha to beta. The extraordinary sexual transformation involves reorganization of the chemistry and structure of the brain, hormones, genitalia, gonads, body size, and body features, among other processes.

In most species of sex-changing fish, the males are the alpha sex, meaning the males are larger and more aggressive and usually do very little if any tending of the eggs. In these species, fish start out as female when they are small and then change sex into males when they get large enough or tough enough to establish behavioral dominance over the other fish in their group. You might ask, "Why is this so? Why are the males usually the alpha sex rather than the females?" The answer seems to be related to the mating system of these fishes. In most coral reef fishes, males defend territories, and the females decide to breed with males depending on the size or quality of their territories. Only the toughest, most aggressive fish are able to obtain these territories, so by choosing these males, females can ensure that they are getting "good" sperm (i.e., sperm from strong, healthy males). The few males that are able to defend territories breed with lots of females, so in terms of number of offspring produced per individual, it pays to be a male, because your reproductive success goes through the roof. So in this scenario, animals can maximize the number of offspring that they can produce if they start out female when they are too small to successfully defend a territory -- at least they can reproduce as female -- and then change sex if and only if they see a vacancy or are big enough or tough enough to beat up a dominant male and take his spot.

Consider the alternative. If the fish were unable to change sex because their sex was predetermined at birth by sex chromosomes, then many males would go their entire life without reproducing if they never got large enough to defend a territory. Wouldn't it suck to be such a wimpy male? It turns out that there are many freshwater fish that display exactly this crappy strategy, in which sex is determined by genes and the mating system is such that many males go their entire life without breeding because they never make it to a size that would make them competitive. Why these fishes have not evolved the ability to change sex like their marine cousins is a real mystery.

Besides their crazy ability to change sex, another really unusual feature about clownfish is that in these species, the females are the alpha sex. Female clownfish are larger and more aggressive than their male partners, and the males do most of the fanning and tending of the eggs. If the males are not doing a good job, the females let them have it. For example, I have seen females pushing and nudging males back toward the nest rather than allow them to grab a few more bites to eat. The reason that the dominance hierarchy is switched in clownfish has to do with the fact that clownfish are monogamous and partner for life. In a monogamous mating system the males will breed regardless of their size. Even the puniest of males get to breed in this system. The size of the females determines the number of eggs she can lay; larger females can lay more eggs. So to maximize the total number of offspring the pair can produce, it pays to have the females be the larger sex. Bottom line: In naturally occurring monogamous relationships, a great strategy is to have the female be the alpha in the relationship, and the male the beta.

In my lab at the Beckman Institute at the University of Illinois, we are studying the brain, behavior, gonads and hormones of these unique creatures to hopefully unravel some of the mysteries of how social experiences coordinate entire sexual transformation. Over the past three years we set up 2,000 gallons of marine aquariums and now have numerous breeding pairs of a species of clownfish known as the false percula, Amphiprion ocellaris, which looks exactly like Nemo. We are raising the larvae up to adulthood and using the laboratory-raised progeny for our experiments. Check out our clownfish sex video:

Many people say, "That sounds interesting, but what is the relevance for humans?" As Dr. Sonya Rhodes, the well-known couples therapist from New York City (and my mother), writes in her newest book, The Alpha Woman Meets Her Match: How Today's Strong Women Can Find Love, Success and Happiness Without Settling, as women gain equality in the social and economic environment, differences in "male" and "female " behavior in men and women dissolve. Her point is that strong alpha women match up better with beta men than with alpha men, with whom they are more likely to be combative. Gender roles are in flux as men and women struggle to find new patterns in relationships.

Clownfish are the ideal model to understand how a good alpha-female/beta-male relationship works. From clownfish we can learn how the alpha-female brain functions to establish behavioral dominance over the male, and the similarities to and differences from how males exert dominance over females in the more traditional male-female hierarchies. I look forward to sharing our discoveries with my readers as our research progresses. 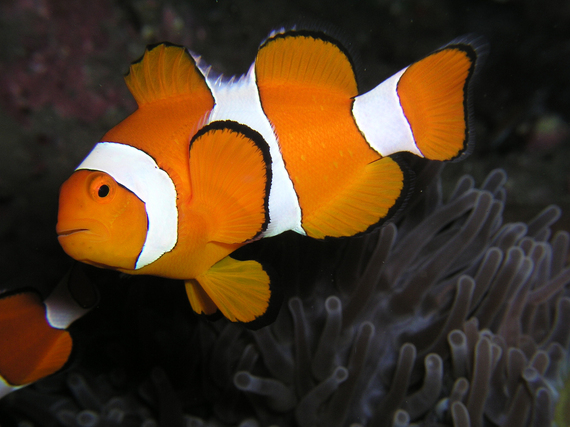