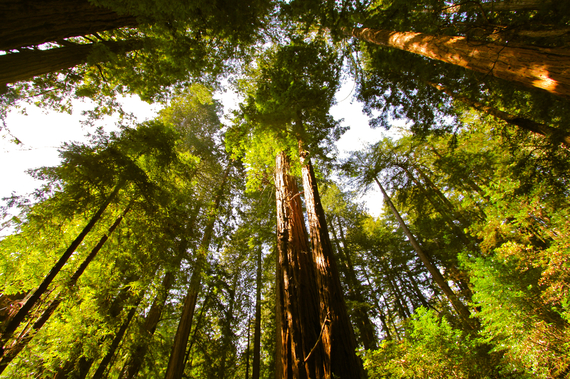 Long considered to be America's most influential naturalist and conservationist, author John Muir founded the Sierra Club in 1892. He called out the therapeutic value found in nature when he wrote, "Thousands of tired, nerve-shaken, over-civilized people are beginning to find out that going to the mountains is going home; that wilderness is a necessity."

His words resonate poignantly in our 21st century bodies, minds and spirits. Too frequently these days we are sequestered indoors, held captive by our obsession with screens in one form or another. In his book, The Shallows: What the Internet Is Doing to Our Brains, author Nicholas Carr explores the consequences of techno-overload. He writes that the average American spends at least eight hours a day on some sort of electronic screen, and then additionally watches TV to relax. This has resulted in a significant increase in depression, obesity and a host of self-destructive habits and behaviors.

Spend 20 Minutes a Day in Nature

In order to enhance our well-being and proactively counterbalance the ubiquitous presence of technology in our daily lives, current research is emphasizing the health benefits of getting outdoors to convene with nature. "Nature is fuel for the soul," says Richard Ryan, professor of psychology at the University of Rochester. In an article in Science News he states, "Often when we feel depleted, we reach for a cup of coffee, but research suggests a better way to get energized is to connect with nature." In a study in the Journal of Environmental Psychology, Ryan and his research team conducted five separate experiments. They found that, across all methodologies, test subjects consistently felt more energetic when they spent time in natural settings.

Their findings concluded that being outside in nature for 20 minutes in a day was enough to boost vitality levels significantly. Ryan writes, "Nature is something within which we flourish, so having it be more a part of our lives is critical, especially when we live and work in built environments." Japanese scientists have long been at the forefront of identifying and validating the health benefits of nature. Inspired by ancient Shinto and Buddhist practices, Shinrin-yoku, or "forest bathing," is a term coined by the Japanese government in 1982. Unlike its description, it has nothing to do with water, and revolves around a deceptively simple practice. It involves quietly walking in nature while absorbing the experience pervasively through all five of the senses. Forest bathing has become a standard preventive and restorative medicine treatment in Japan.

In his book, The Nature Principle: Reconnecting with Life in a Virtual Age, author Richard Louv explains the restorative powers of the natural world. The benefits he lists include, "boosting mental acuity and creativity, promoting health and wellness and ultimately strengthening human bonds." Citing widespread evidence of the negative effects that occur when we are separate from nature, he coined the phrase "Nature-Deficit Disorder" and our need for "Vitamin N." He writes, "For the jaded and weary among us, the outdoor world can expand our senses and reignite a sense of awe and wonder not felt since we were children. It has been proven to support health and act as a bonding agent for families and communities. Nature can help us feel fully alive."

As science is validating our need for a nature prescription, the stories of everyday people reflect an ongoing, personal love affair with nature. This became clear to me when I casually surveyed my friends and colleagues, asking them to recall a favorite childhood memory of being in the great outdoors. Invariably, and without hesitation, I heard tale after glorious tale recounting forays in nature that encompassed curiosity, discovery, contentment and, above all else, fun.

Their uplifting stories reminded me that surfing doesn't just take place on the Internet. It still can happen on a board, in the ocean. Exploring doesn't just take place through digital search engines. It can still take place in the woods, while foraging for wild strawberries. A sweet return to nature could involve less time viewing video streams and more time sitting next to babbling brooks in which fallen leaves double as sailboats. Because we are living in a time of unprecedented digitization and urbanization, we can be grateful for the medical benefits of staying close to nature.

Time well spent in natural environments will aid us in enhancing our physical, mental and emotional well-being. We can find encouragement and solace in the enduring words of John Muir, "Everybody needs beauty as well as bread, places to play in and pray in, where nature may heal and give strength to body and soul ... Keep close to nature's heart and break clear away once in a while. Climb a mountain, or spend a week in the woods. Wash your spirit clean."

What are your favorite places in nature where you can go to relax and renew?

Have a question regarding transforming your way of eating and living, Ask Dr. Ornish.