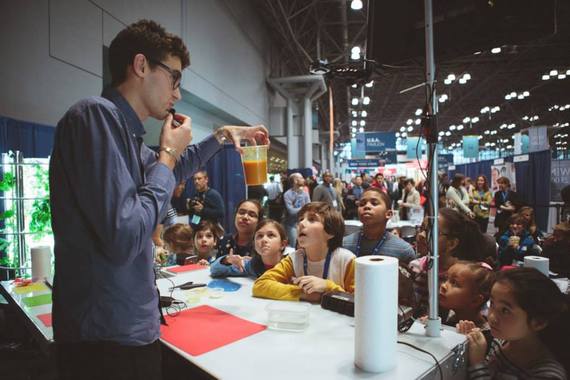 Vayu Maini Rekdal is a chef-scientist originally from Stockholm, Sweden. He is currently a PhD student in the Molecules, Cells and Organisms program at Harvard University, where he is studying biochemistry under the support of the prestigious NSF graduate research fellowship.

By 2050, the world's population is estimated to reach 9 billion. Meeting the demands of the future requires innovation in areas as diverse as climate, medicine, agriculture, and technology. More importantly, it requires a scientifically literate population to drive this innovation in the first place. In 2016, we must prepare for tomorrow by empowering youth with the scientific knowledge they need to reach their potential as agents of our future. Inspiring a new generation of scientific geniuses is no simple task, but the solution may be closer than we think: in our own kitchens, where science is happening everyday, in pots, pans, and mixing bowls.

At first glance, the idea of learning science through cooking may seem surprising, because while scientific concepts and principles are largely universal, the foods consumed on this planet are as diverse as the humans who inhabit it. Every region, and family seem to have their own way of preparing food, of transforming nature's raw materials into nourishment and deliciousness. How could there be general scientific truths hiding in diverse cuisines?

The answer lies in the fact that no matter what the local food traditions are, our motivation for eating is surprisingly universal. We eat not just to please our senses, but also to get the proteins, energy, vitamins, and nutrients that enable our growth and reproduction, our very existence. Diet provides us with the fundamental building blocks of life. Because we all need to access the same building blocks through our cooking, foods across the world share many commonalities in terms of ingredients and processing methods. This also means that the foods share many commonalities in terms of the science that makes them possible in the first place.

When one breaks down food to its molecular components, one quickly realizes that the diverse array of cooking methods on this planet hide a universal set of scientific ideas. For example, the nutrient-packed chokeberries traditionally consumed by the American Great Plains tribes have a similar pH-sensitive color compound to the red cabbage that was always a prominent C-vitamin source in Europe. The polymers that hold Masa-based corn tortillas together are work the same way as those that bind the traditional Ethiopian bread Injera, in both cases lending structure and necessary elasticity to these ostensibly unrelated flatbreads. The molecules give chili peppers hotness evolved for a similar reason to the pungent aromas in basil, rosemary, and other herbs; the proteins we cook in eggs and animal products all behave the same under heat.

Breaking down food its molecular components opens new opportunities for education, allowing us to view the science and cooking in a new light. By acknowledging the universality of science in all forms of cooking, and by teaching physics, chemistry, and biology in the context of regional food habits, we can not only connect with existing traditions, but also make science truly approachable and accessible. As a bonus, this makes education culturally sensitive, and adaptable, inviting people to find learning opportunities in everyday life. It allows people to cultivate their scientific genius, one bite at the time. 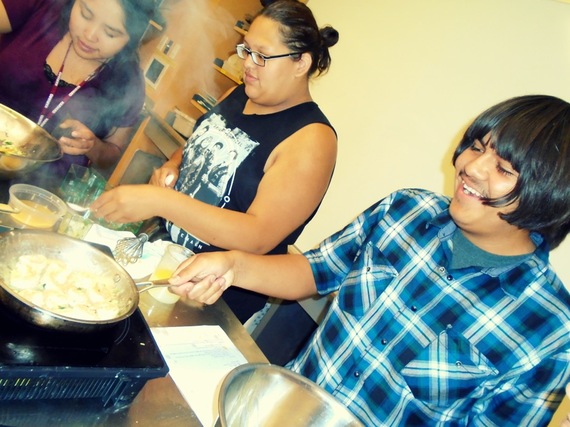 I have witnessed the power of cooking and science education countless times in my work with Young Chefs, a non-profit that develops and teaches cooking-science curriculum for educators across the globe. Whether working with Somali immigrants in rural Minnesota or Native American youth in Boston, I have realized that students respond best to science when they are invited to play a role in the learning process. When the chemistry and biology is presented in the context of familiar foods, students are invited to share, learn, and engage on multiple levels. For example, when learning the concept of polymers with Native American youth this past summer, we did so by using their local corn varieties to make corn meal and tortillas. By connecting cooking and science, we can teach scientific lessons through a familiar medium.

Inspiring scientific geniuses among the next generation may be as easy as thinking more deeply about the food we consume and prepare. It's about learning by immersing ourselves in our human-ness to find new connections between the culinary and natural worlds. It's about looking around us and finding the beauty of nature's FARMacy no matter where we are, who we are, and what we eat.

This post is part of a series produced by The Huffington Post and 92Y's "7 Days of Genius" Festival, starting March 5, 2016. The festival's intent is to ignite a global conversation to explore the power of genius to make a positive impact on the world. For more information about the festival, and it's schedule of events in New York and around the world, read here. And to join the conversation on Twitter, follow #THATSGENIUS