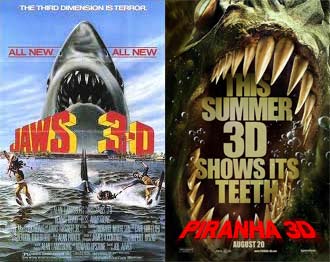 Eighteen months ago we started production on an animated film and, believe it or not, there was great debate at that time whether we should make the movie in 2D or 3D. Instinct told us to go with 3D. Ten months later, Avatar came out and changed everything. Today, movies shot in 2D are jumping on the 3D bandwagon during post-production by means of a conversion process--with debatable results. Jeffery Katzenberg, whose company made the stylish 3D animated film How to Train Your Dragon, publicly criticized Warner Brothers for the shoddy job they did converting Clash of the Titans. "If we take the low road, we'll be out of the 3-D business in 12 months," he said.

That was about four months ago; I'd like to hear what the high-road-choosing Katzenberg has to say about the severed members and body parts flying out at audiences in the recently-released Piranha 3D. James Cameron, who is credited as the director of 1981's Piranha Part Two (but really only worked on the movie a few days before getting fired), did not hold back when talking about Piranha 3D in an interview in Vanity Fair.

"... that is exactly an example of what we should not be doing in 3-D. Because it just cheapens the medium and reminds you of the bad 3-D horror films from the 70s and 80s, like Friday the 13th 3-D."

In response to Cameron, Mark Canton, the producer of Piranha 3D, vehemently defends his film and blasts Cameron in a lengthy diatribe on Movie Line. Here is an excerpt:

"His comments are ridiculous, self-serving and insulting to those of us who are not caught up in serving his ego and his rhetoric. [...] Does Mr. Cameron have no idea of the painstaking efforts made by the talented young filmmaker Alex Aja and his team of collaborators? Clearly, and this one is a good bet, he has no clue as to how great and how much of a fun-filled experience the audiences who have seen the film in 3D have enjoyed."

With Avatar and How to Train Your Dragon, the 3D experience was mostly behind the plane of focus, giving a sense of depth and adding a unique visual experience without drawing too much attention to itself. Piranha 3D and Jackass 3D are taking the gimmicky aspect of 3D to the extreme by having things jump out of the screen. I had lunch with a friend last week who told me that the last movie he saw in 3D was Jaws 3D, which was released in 1983. It makes one wonder if everything has come full circle and 3D is once again essentially a gimmick for making menacing fish swim around the heads of the audience.

On the other hand, I have to say there is a fun marketing hook to Piranha 3D (which was unfortunately converted to 3D in post-production) and the upcoming Jackass 3D. If you ask me, an extra dimension will make Johnny Knoxville and friends wiping out while attempting ludicrous stunts even funnier--and make the audience even more squeamish. I believe that there may be room for both types of films, that audiences are savvy enough to differentiate between gimmicky use of 3D and the visceral depth and complexity added to movies with a different, more artistic flavor. That said, I suspect the fundamental factor that will keep audiences interested in or turn them off of the technology is not the genre or budget but the quality of the 3D itself. This is where Piranha 3D falls short.

By the time we have finished our animated film, it's a possibility that the 3D horse will be so beaten to death, our instinct to go for 3D from the outset will have been proven to be both prophetic and ill-advised. Or fittingly enough maybe another franchise from the early eighties will renew faith in the format when Tron: Legacy rolls out in December. My gut tells me 3D is here to stay.