A senior chief who was censured by the Secretary of the Navy for hazing sailors under his command may retire with a full pension, Navy officials say.

Since it was announced last October, the terms of Michael Toussaint's retirement have come under scrutiny that is unprecedented for an enlisted sailor. The senior chief petty officer, who from 2005 to 2006 led a Bahrain-based canine unit that was plagued by widespread documented abuse, denied much of his alleged misconduct in February during a retirement board hearing, a proceeding normally reserved for commissioned officers.

The case will soon go to the desk of an assistant secretary of the Navy, who faces a choice: to approve the unanimous recommendation of the three board members who said Toussaint deserves to retire with a senior chief's pension; or to take a harder line and reduce him to a lower pay grade, as government lawyers had sought to do during the hearing.

Deciding against the retirement board's recommendation would be rare.

"I've never yet seen one (a board recommendation) that was overturned by a higher authority," said Eugene Fidell, a professor at Yale University and President of the National Institute of Military Justice. 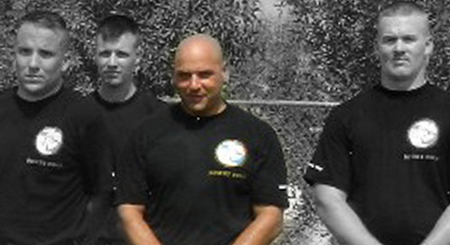 But advocates for the sailors who were abused under Toussaint's leadership said Navy officials had led them to expect a harsher judgement from the board hearing, which according to Navy guidelines determines the highest rank at which a sailor or officer has served honorably.

"I was surprised," said Aaron Tax, legal director of the Servicemembers Legal Defense Network, "because we thought that the Navy believed this was someone who engaged in outrageous behavior." Tax said despite the board's recommendation, the Navy should lower Toussaint's pension to that of a first class petty officer, the rank he held before becoming chief of the Bahrain unit.

Last September, Youth Radio uncovered a 2007 Navy investigation into claims of the unit's culture of abuse and connected it to two subsequent investigations into the suicide of a sailor implicated in the hazing scandal. While names in the copies of the Navy report were redacted, Youth Radio interviewed six sailors from the unit, all of whom named Toussaint as the ringleader of the abuse.

During the February hearing, Toussaint denied the most serious accusations against him -- that he ordered sailors to simulate sex acts during training exercises, that he threw parties with hired prostitutes, and that he condoned the humiliation of a gay sailor who was hog-tied to a chair and left in a dog kennel.

Toussant's lawyers claimed that four sailors who testified against him at the hearing were exaggerating the extent of the hazing. They accused one sailor, Joseph Christopher Rocha, of lying about Toussaint in the media to increase his own public profile as an advocate for the repeal of the U.S. Military's "don't ask, don't tell" policy. Rocha was discharged from the Navy under the policy after returning from Bahrain.

Youth Radio has obtained statements from each of the retirement board members -- an enlisted sailor and two Navy officers -- explaining why they sided with Toussaint.

"Senior Chief Toussaint has served honorably and was made the 'scape goat' in this case, for the benefit of one disgruntled sailor," wrote one of the board members, Lt. Cmdr. Angel Bellido.

Another board member wrote that he took into consideration the testimony of a Navy SEAL who said Toussaint saved his life last summer when he was shot during a combat mission in Afghanistan.

Toussaint included these statements in a March letter to Juan Garcia, the assistant secretary of the Navy who oversees personnel and will make the final decision on the retirement pay.

"The board's unanimous decision... is a clear repudiation of the allegations," Toussaint wrote in the letter, which Youth Radio obtained through his lawyer.

Military law experts familiar with Toussaint's case said he may be the first enlisted sailor to go before a retirement grade determination board, a proceeding that exists outside the military justice system.

The Navy's top officials decided in October not to court-martial Toussaint and instead canceled his final years of service and sent him a letter of censure from the Secretary of the Navy, the harshest administrative reprimand that can be taken against a sailor. Navy secretary Ray Mabus said the decision to forgo a court martial was based on several factors, "including the time elapsed since the hazing incidents, the fact that Senior Chief Toussaint's involvement previously was reviewed by an authorized commander, and Senior Chief Toussaint's proximity to retirement eligibility."

Toussaint became eligible for retirement pay in January, when he completed 20 years of serving in the Navy. According to the Office of the Secretary of Defense website, his pension would amount to $2,100 a month if he retired at his current rank. If Garcia reduced Toussaint to a first class petty officer, he would receive $1,667 -- about $5,000 less a year.

The board hearing has also in effect delayed Toussaint's separation from the Navy beyond the time frame the Navy laid out last year. Instead of retiring in January, the original departure date given by naval officials, Toussaint has continued to work a desk job in Dam Neck, Va. and to receive a Navy paycheck.

"We call it a stash job," his lawyer, Cmdr. Aaron Rugh, said of the current low-priority assignment. "He's in limbo."

A Navy spokesman said that the results of the retirement hearing are now under review by the Navy's personnel bureau and that assistant secretary Garcia would make his decision "within the next several months."

Eugene Fidell said that Garcia, a former Congressman, provides civilian oversight to retirement boards, which use military laws and culture to make their determinations.