It was the recent Pearl Harbor Day anniversary that brought the secretary of the Navy to Hawaii, but while on the islands the cleantech-boosting Ray Mabus wasn't going to miss an opportunity to inspect the service's potential renewable energy projects there. Apparently, there are an awful lot of them.

According to the Office of Naval Research (ONR), on his trip Mabus got an update on the five General Motors Equinox fuel-cell vehicles being put through their paces at Marine Corps Base Hawaii. The Navy is considering broadening their use and, perhaps more importantly, fuel cell technology is under review for possible use in unmanned undersea vehicles, auxiliary power units, pier-side generators and other applications, the ONR said. Interesting stuff in light of a recent report commissioned by the U.S. Department of Defense (DOD) that concluded the military "should more proactively evaluate and acquire fuel cell systems." 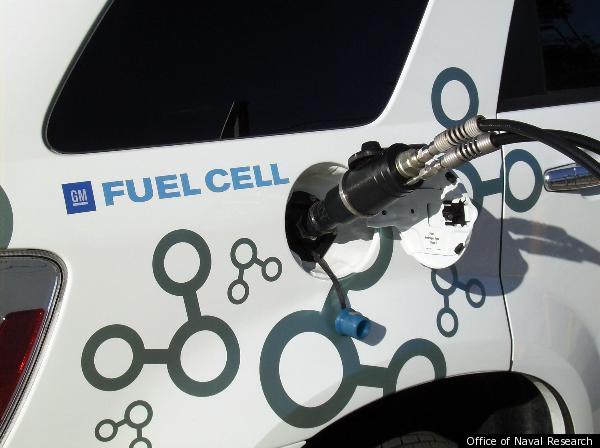 "To meet the secretary’s energy goals, we need alternative, clean and reliable energy sources," Richard Carlin, director of ONR's Sea Warfare and Weapons department, said in a statement. "Fuel cells provide a means to reduce our dependence on fossil fuels by using sustainable alternative fuels and by increasing energy efficiency. They also provide advantages to tactical platforms, including ships and unmanned vehicles, by increasing platform ranges and reducing detectable heat and acoustic signatures."

The big bugaboo with fuel cells -- for the Navy and anywhere, really -- is the cost of the hydrogen. To that end, the ONR said it is working with researchers at the University of Hawaii at Manoa's Hawaii Natural Energy Institute, the Department of Energy and other public and private organizations "to tackle this challenge." Some of the approaches being studied are detailed here on the Energy Institute website.

While in Hawaii, the secretary also checked out a micro auto gasification system (MAGS) the Navy is evaluating. Developed under the ONR Sea Warfare and Weapons department's Environmental Quality Discovery & Invention program, this machine "can reduce a 50-gallon bag of waste to a half-pint jar of harmless ash." If this sounds like just some cool gizmo, check out the video below; real live Marines say MAGS could be a big benefit to them at forward-operating bases.