Half-Puerto Rican actress Naya Rivera poses poolside in a bikini for the premiere issue of (on newsstands now).

In the magazine's first issue ever (which features actress Zoe Saldana on the cover), the "Glee" star talks about her Latin roots and explains how being Latina influences her daily life.

“I definitely think being Latina has an influence on my style,” Rivera tells the magazine. “Latinas are really confident women, so I think that that shows in what I wear.”

Rivera, 25, who recently told The Huffington Post she wants to see more gay characters on television, tells Cosmo for Latinas there's nothing "risky" about playing a Latina lesbian on primetime. "I honestly don't think it was that much of a risk, just because it's so prevalent nowadays. It's something that a lot of people can relate to. It's an important story to tell, and I'm thrilled to do it," she says.

Rivera also tells the magazine that her biggest Latina role model is fellow boricua, Jennifer Lopez. "I look up to her," Rivera says. "What she’s done with her life and career is awesome and I hope to do that one day.”

According to The Wall Street Journal, Rivera will sing the Selena Gomez song, "Love You Like A Love Song" on tonight's episode of "Glee," airing tonight at 8/7c.

CHECK OUT THIS SLIDESHOW OF NAYA RIVERA'S SEXY PHOTO SHOOT FOR COSMO FOR LATINAS!

AND TO SEE PHOTOS OF NAYA'S WASHBOARD ABS, VISIT HOLLYWOODLIFE.COM! 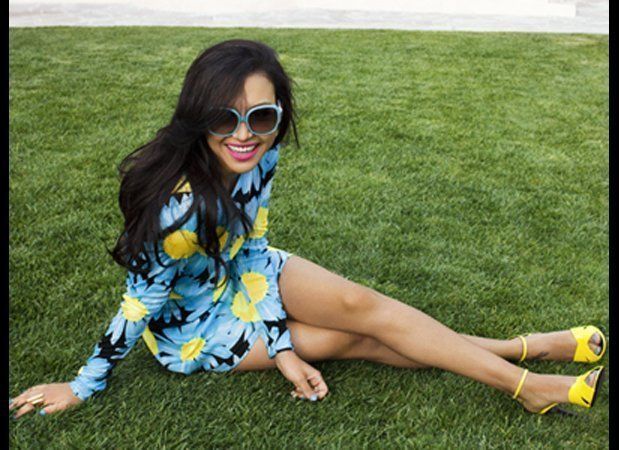 1 / 6
In A Bluemarine Dress and Shoes by Giuseppe & Swarovski Sunglasses
Gabrielle Revere for Cosmopolitan for Latinas.