MURFREESBORO, Tenn. ― We spotted our tail not long after the neo-Nazi rally ended: a black GMC Sierra pickup with tinted windows and silver trim. In my rear-view mirror, I could see the outlines of two men in the cab: big dudes with military haircuts and bull necks ― not-fucking-around types.

I turned left slowly. So did the pickup. At the end of the next block, I turned right. The pickup did too.

“Is that truck with you guys?” I asked Corey Lemley, an anti-fascist activist sitting in the passenger seat of my rental car. Lemley turned to look out the back window.

It was the last weekend of October, and I’d come to middle Tennessee to cover a pair of “White Lives Matter” rallies thrown by several of the white supremacist groups responsible for the deadly carnage in Charlottesville in August. The League of the South, a Southern separatist group, had taken the lead in organizing the rallies, with support from other groups, including Matt Heimbach’s Traditionalist Worker Party, a neo-Nazi outfit.

Heimbach’s Nazis are returning to Tennessee to protest the Women’s March taking place in Knoxville on Sunday. The Nazis plan to attach themselves to a competing anti-abortion “March for Life” rally. How this will pan out for the fascists is anyone’s guess, but back in October, things didn’t go well for them in the Volunteer State. Heimbach’s crew started a fight with a biracial couple in a Brentwood pub. And their two rallies only put a spotlight on the weakness of their movement and the strength of their opposition. The second event, in Murfreesboro, was a total flop. Heimbach’s Nazis bailed, scared off by hundreds of counter-demonstrators who descended on Murfreesboro’s main square.

I’d been standing with those counter-demonstrators at the end of the rally when the crowd parted for a black-clad column of activists marching from the square ― Lemley’s crew, 50 militant anti-fascists, some of them members of Nashville Anti-Racist Action. (Many of the people in Lemley’s network will mobilize again to confront Heimbach anew.) People gawked and took photos. The ARA had a different air about them. They were ready to throw down. They were ready to go. Many had strips of tape across their chests with “Heather” written on them in tribute to Heather Heyer, the anti-fascist killed in Charlottesville when a car plowed into a crowd. A white supremacist has been charged with murder in the case.

I’d interviewed Lemley a few days earlier over the phone. He was the local antifa front man, in part because he’d been organizing publicly in the Nashville area for months after white supremacists doxed him. We’d arranged to do a post-rally interview, this one on camera, and Lemley gave me the address of a safe house where I could pick him up to drive him to a HuffPost video team.

But when I’d arrived in my Ford Fusion Hybrid ― which, notably, allows a motorist to trade engine performance for efficiency with the push of an “EcoSelect” button ― I saw multiple police cruisers circling ominously through the quiet neighborhood. Vehicles with tinted windows idled at intersections. I would later learn that a drone had hovered over the safe house before the rally.

The GMC, though, was a more pressing concern. As soon as Lemley and another ARA member got into my car, the black pickup had appeared, right behind us, not even feigning subtlety after we doubled back on a side street.

“They’re definitely following us,” I said.

I stamped on the pedal of the Fusion and made a quick turn at a stop sign, then another one at a light. The GMC sped up and stayed on us. How was this possible? Murfreesboro was crawling with cops. Where were they now? And who was on our tail? This wasn’t Heimbach’s style.

I swung abruptly across traffic and pulled into a driveway across the street, leaving no way for the GMC to follow. The men in the pickup would have to make a move now. They drove past us and stopped. It looked like they were about to get out.

Lemley reached into a backpack at his feet.

The gun chk-chkd as he chambered a round. 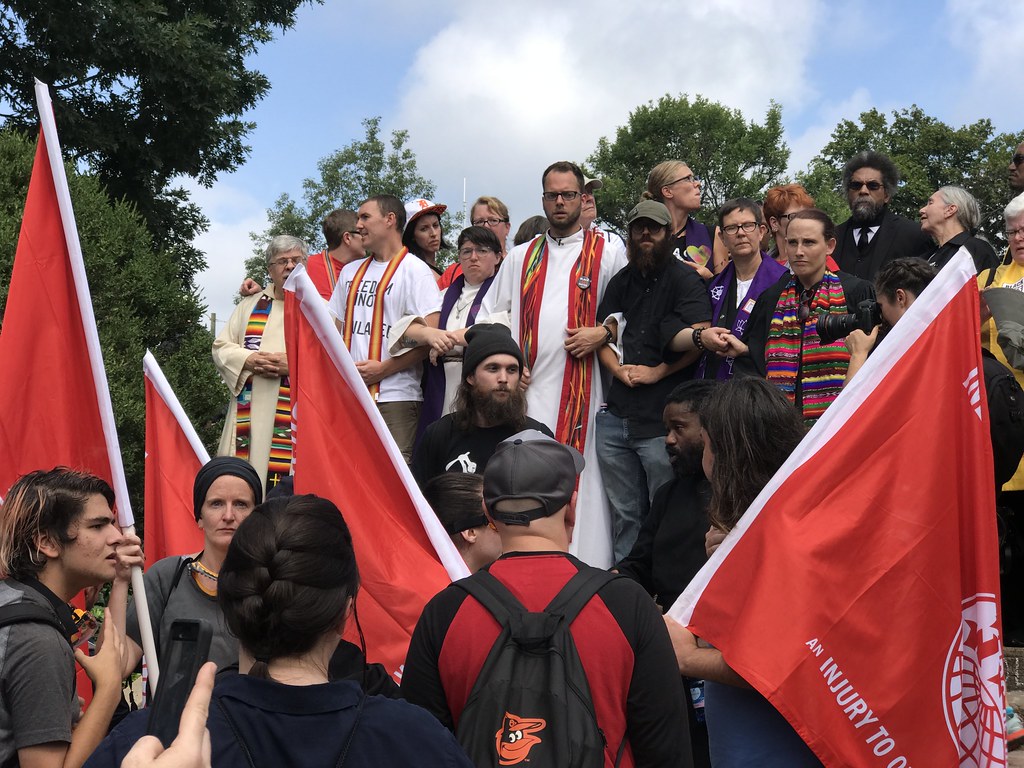 I’d been talking to antifa for months, hearing about the risks they took to fight fascism in America. Last April, somebody put a quarter stick of dynamite in Lemley’s mailbox and blew it to bits. In August, he’d been on the front lines in Charlottesville, part of an antifa defensive unit that fought off a battalion of League of the South racists who charged with weapons and shields at a group of clergy. (“Antifa saved my life twice,” said Rev. Seth Wispelwey, a local minister.)

The danger didn’t seem real until you experienced it. And the shock had less to do with the potential for bloodshed in America than the realization that organized political violence isn’t some distant, foreign problem. And that forces within our own country have stoked it.

Over the last year, far-right propagandists such as Mike Cernovich and Jack Posobiec have hyped antifa hysteria on social media, using the most garish images and examples of antifa dust-ups with racists and fascists to demonize the entirety of the left, as well as centrist liberals, the media and anyone who might challenge President Donald Trump’s MAGA agenda. Around the time I was in Murfreesboro, one of these operatives, Jeff Giesea, a Stanford University graduate and Peter Thiel associate who has, according to several of my sources, acted as a paymaster for far-right extremists online, tweeted that I, too, was antifa, then lied about it when I challenged him.

For conservatives, antifa are a convenient bogeyman, a faceless “commie” mob that allows the political right to engage in “both sides” rhetoric and distract from dangerous elements in the Republican base. There are reasons beyond gun sales that political organizations such as the National Rifle Association fearmonger about anti-fascists and invoke anti-Semitic conspiracy theories about George Soros mailing them checks. These lies, which create an easy out-group to hate, have permeated the minds of many on the right.

But I’d spent long hours getting to know antifa, and although they tended to be ardent personalities, their motivation was simple: to combat fascism, racism, misogyny, intolerance and inequality. Their tactics could, at times, be worrisome, and their anarchist and anti-capitalist views occasionally prompted a few of them to break the window of a Starbucks. As a result, they were vilified as a threat to the system in a way that violent white supremacist and fascist organizations, which routinely commit acts of domestic terrorism, were not.

Lemley and I watched the pickup across the street, waiting to see if someone would emerge. After the Murfreesboro rally ended, I’d been approached by a strange young man ― frail, well-groomed and painfully awkward in the manner of an internet goblin. Based on the questions he asked me about antifa, I made him as an alt-right spotter from the other camp. His eyes warily tracked the ARA activists as they left the town square. The alt-right tried to keep tabs on antifa. But this kind of aggressive pursuit felt off for them. It felt military.

“They could be militia,” I said to Lemley, referring to the far-right Three Percenter groups that often show up at Nazi rallies and stand with their backs to the fascists and long guns pointed at anti-fascists, seemingly looking for an excuse to shoot.

I reversed the Fusion out of the driveway and sped away in the direction we’d come. The truck did a U-turn and barreled after us. What happened next is hazy, but I remember pulling up to a red light, the GMC two vehicles behind us, then cutting in front of an entire lane of traffic when the light changed to get to the on-ramp of a highway. The truck did the same maneuver in a far more dangerous fashion, forcing cars to veer out of its way.

I called the HuffPost video producer and asked for her team’s location. My plan was to screech to a halt in front of a running video camera, which would likely scare away our pursuers. The producer told me she was in a park, with police nearby. The park was five miles outside town.

As we lashed through traffic, I watched the truck try to keep up in my rear-view mirror. At one point, the GMC swerved across double yellow lines into oncoming traffic. Lemley’s cell phone had died, and I was driving with one hand and navigating Google maps on my phone with the other. Even worse, the Fusion’s EcoBoost button seemed stuck. I kept jabbing at it to get more speed, but failed to detect a horsepower upgrade.

Where were the cops?

I tried to shake the truck by turning off the highway briefly and cutting through a bank’s parking lot and back onto the highway. The truck roared after us, but I managed to weave through several cars and make another turn onto a side street. The GMC was gone. The driver must have missed us. We’d lost them.

And we hadn’t been the only ones followed. Lemley later learned that around six other trucks had tailed anti-fascist vehicles after the rally. It had been a coordinated operation. A member of Nashville ARA who goes by Julez described to me how trucks had circled the safe house late into the night.

“The people who do this work with us are not scared of these people,” Julez said. “But it’s unnerving to go into this space with a bunch of guys like that who just want to fucking kill people.”

Julez told me he’d gotten a good look at one of the men in the trucks. He said the man had a patch on his shirt.

I struggled to process that information. Smyrna was a town a few miles north of Murfreesboro on the way to Nashville. And the Smyrna Police Department had indeed sent its SWAT team to Murfreesboro, according to Sgt. Bobby Gibson, the department’s SWAT team commander. But Gibson told me on Sunday that his officers had been staged away from the rally as a support unit and never left that location.

“We don’t even have a vehicle that matches that description,” Gibson said. “There was nobody from our police department following anybody.”

Gibson didn’t think it was implausible that militia members could have been chasing us. “There was a lot of activity from those groups prior to and after this event.”

Besides, he added, if law enforcement has a reason to stop you, they’re going to stop you. “And from what you described, you gave them grounds to stop you.”

So who were those bull-necked goons in the GMC? Fascists? A militia posse? And will they be back Sunday in Knoxville? It’s a shame to end on a mystery, but so it goes.