Let's call the "alt-right" by its correct name. These are neo-Nazis.

The simple and awful truth is that the rise of Trumpism is bringing neo-Nazism from the fringes in the United States into the halls of government itself.

We must resist this now. We must call this out now before it gets even more normalized and entrenched.

Now is the time to resist this with every resource we have.

One resource I have as a Christian pastor and theology teacher is the work of Dietrich Bonhoeffer, the German theologian, pastor and anti-Nazi dissident who was hung for his resistance work.

Bonhoeffer wrote Letters and Papers from Prison from Tegel prison where he was incarcerated by the Nazis for a year and a half. He was later transferred to a concentration camp and subsequently executed.

His famous question, "Are we still of any use?" must be front and center today, I believe, for anyone who might still think the Christian faith could have something prophetic to say in the face of the rise of neo-Nazism in the United States. This is a question to take with utmost gravity. And we dare not give any easy answers.

Remarkably, from prison, Bonhoeffer first indicted himself and other Christians:

We have been silent witnesses of evil deeds; we have been drenched by many storms; we have learnt the arts of equivocation and pretense; experience has made us suspicious of others and kept us from being truthful and open; intolerable conflicts have worn us down and even made us cynical.

This is an indictment I think we need to take with consummate seriousness. "Intolerable conflicts" can wear you out and wear you down. Especially for those of us who have been social justice advocates for years, you ask yourself, 'do I have the energy for this, again?'

Bonhoeffer does not relent. He goes on to ask, and this is a question I think every person of conscience in the United States today needs to ask her or himself:

Are we still of any use?

We don't need to be especially clever in answering this, Bonhoeffer wryly says. Just honest and straightforward.

But don't kid yourself that you'll be up to it.

Will our inward power of resistance be strong enough, and our honesty with ourselves remorseless enough, for us to find our way back to simplicity and straightforwardness?

"Remorseless honesty" compels me to say 'I hope I am,' but it is important to know what Bonhoeffer realizes broke in Germany. What broke was the ability to be "straightforward."

This is a picture I took of the "Memorial to the Murdered Jews of Europe" when I was last in Berlin. 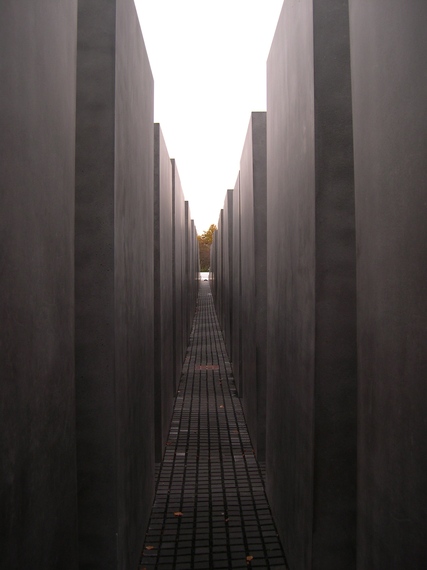 This is an astonishing place and, of course, has been very controversial. It is a huge area with blocks and columns that are irregular and, as you realize when you walk through, they are slightly tilted. As you move between the spaces, your perspective becomes warped and distorted. Little by little. Step by step.

For me, this is what happens to people when their moral values becomes skewed, little by little, and step by step. Finally, you cannot see how perverted your perspective has become. Accepting unconscionable cruelty can be the result.

What then do we need to do? Resist now. Take a small step away from distortion and toward clarity.

Don't use the term "alt-right." Call this racist, sexist, anti-semitic, Islamophobic, homophobic, and xenophobic ideology by its correct name.