A blogger for CBS Houston has been skewered by disgruntled readers this week after asking if an NBA cheerleader is "too chunky" to wear skimpy clothing.

After Game 1 of the NBA playoff series between the Oklahoma City Thunder and the Houston Rockets, blogger Claire Crawford commented on the appearance of Thunder cheerleader Kelsey Williams. Crawford wrote that the cheerleader is a "pretty blonde" but claimed that the young woman's "pudginess" was being criticized "by some folks in OKC." 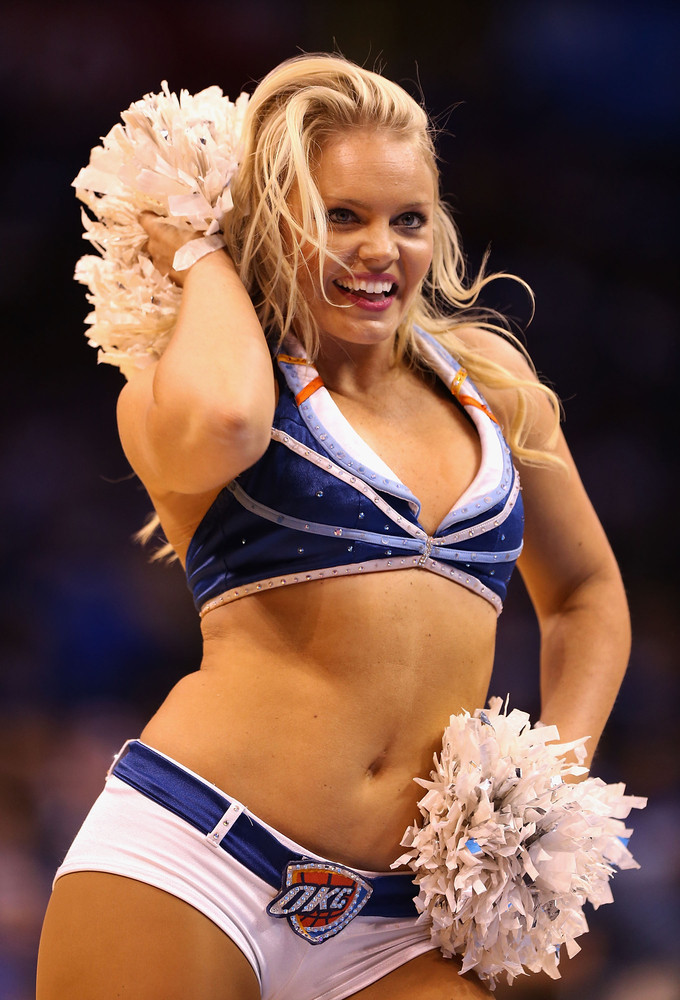 OKC cheerleader Kelsey Williams performs during Game One of the Western Conference Quarterfinals of the 2013 NBA Playoffs against the Houston Rockets at Chesapeake Energy Arena on April 21, 2013 in Oklahoma City, Oklahoma. (Photo by Christian Petersen/Getty Images)

"[If] she's comfortable wearing that tiny outfit and dancing for NBA fans, then good for her," Crawford wrote, according to NY Daily News. "Besides…not every man likes women to be toothpick skinny. I'd say most men prefer a little extra meat on her bones. Am I right?"

However, despite this concession, a poll attached to Crawford's blog post -- which was pulled from the CBS Houston website earlier this week -- encouraged readers to judge Williams' figure. (A cached version of Crawford's post is still available here.)

"Voters could choose from three options. Either they thought Williams had "the perfect look to be an NBA cheerleader," "she could use some tightening up in her midsection," or "she has no business wearing that outfit in front of people,"" noted ABC News.

The backlash to Crawford's post was swift, with many readers expressing outrage at the blogger's comments.

“It’s articles like this that lead young women and girls to anorexia and bulimia,” one reader wrote, according to the Daily News. Other commenters reportedly called for the blogger to be fired.

Netizens have also taken to social media sites like Twitter to offer support to the OKC cheerleader.

"You are beautiful and perfect the way you are," wrote one fan on Sunday.

Williams herself has spoken out on Twitter in response to Crawford's post, later also thanking her fans for their encouragement:

"To be womanly always, discouraged never"

We wouldn't know what blessings were if we didn't go through trials. Thank you to EVERYONE for the compassion and love today. I'm in awe.

According to the Houston Chronicle, "Claire Crawford" appears to be the pen name used by blogger Anna-Megan Raley, who also writes under her real name for CBS Houston. ABC News points out that Raley's Twitter accounts -- both under her name and her nom de plume -- have been deleted.