Brian is anchor and
managing editor of the NBC Nightly News
based in New York.  Last week, his show, including
the segment Making a Difference, had
9.5 million viewers.  The show spikes up
to 11 million viewers frequently.

I had interviewed the
orphanage’s founder Andeisha of Kabul in New York in September and have followed
her progress carefully.  I knew immediately
that Brian’s focus would have an enormous impact on her good work. 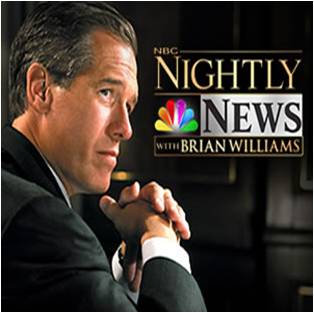 As founder of Orphans International Worldwide, I am familiar
with running homes for children around the world – and the difficult task of
raising the fund necessary to do so.

What I did not grasp
about the piece on Making a Difference was
what an enormous difference it would
make – with so many contributions that flooded over the Internet to fund the
kids there from Brian’s generous viewers.
He thanked them the following week (video).

I wanted to speak with
Brian about how good that must make him feel – and how this sense of
responsibility must now shape his life – so I asked him to call me, and he did.  Brian told me:

I was
really revved to do a piece on this orphanage in Afghanistan.  I wanted it to be seen by as many people as
possible – and luckily it was.  I was so
grateful – we raised much more for those children than we had thought possible.

I do
pieces on different topics.  We were in
Kabul when there was a huge loss of life at the U.N. and I wanted to do a story
after that which was ‘nice and hopeful.’
We had one day to do this feature piece, and it all just came together.

Sitting
there in our rental house in Kabul, I realized I had a personal enough relationship
with our viewers – who I felt could be very generous – to ask them to help
these kids.  And they did!

The
cultural differences and similarities in the orphanage were enormous.  Little girls are little girls anywhere in the
world.  Thank God I have parented two
children, so it was the most natural of moments.

Switching
glasses with them, seeing them draw stars and hearts…  The children were so tactile, kind, loving,
affectionate, and gracious.

I saw a
picture of Paul Stevers there on the wall, the founder of CharityHelp International
in the U.S. that provides a bridge between child sponsors and the children
there.

The kids
had a politeness, and order, a discipline – not like in Annie, but an attitude of accepting real responsibility – the way I
was raised.  It was so real.

On his blog, Brian had
posted the following after his viewers had been so generous:

I want to
say thank you -- and to express my ongoing appreciation at the amazing
generosity of our viewers.  We did a
follow-up on the orphanage in Afghanistan.

I was only
home from work for a few hours when we learned they had already received 500
e-mails from Nightly News viewers -- many of them offering donations and
pledges to sponsor a child.

It is
immensely gratifying, and I’m beyond words in expressing my thanks and appreciation
on behalf of the lovely children we met over there. 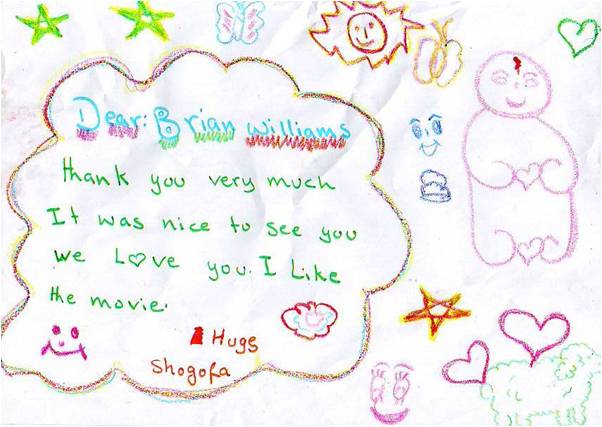 Brian Williams received individualized cards
from each of the children in Kabul.

“Although some are
one-time gifts, our experience tells us that many of the child sponsors will
continue to give for the next few years so the benefits of Brian’s efforts are
very substantial and will enable AFCECO to care for many more children,” Paul
Stevers, founder of CharityHelp
International, told me.

CharityHelp
International is the Internet bridge that connects the children to child
sponsors around the world.  Orphans
International Worldwide, the charity I founded, relies on CharityHelp to fund
our kids in Haiti, Indonesia, and Sri Lanka.

“Security is an enormous
issue in Kabul,” Brian told me.  “In
Kabul, importance is measured by the size of your gate and the number of guns
you have.  I hope the orphanage there will
be able to spend more on security,” Brian added.

Clearly, the segment Making a Difference is making a
difference.  From one night a week, the
segment now airs up to five times a week.

“It was my wife’s idea,
honestly,” Brian shared.  “With the
economy sinking, she said, ‘Someone, somewhere is doing spectacular acts of
kindness – go capture them!’  And we
did,” Brian told me.

Making a Difference features mostly ordinary people, although it
has begun to also focus on celebrities using their visibility to also help
humanity. 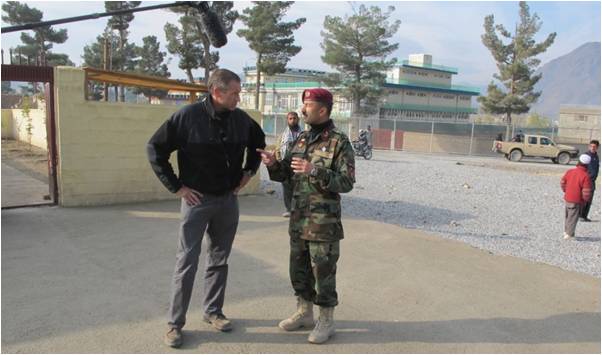 Quintessential thought leaders
and global citizen Brian Williams on the streets of Kabul.

Brian replaced Tom
Brokaw, one of his mentors, in 2004.  Previously,
Brian was the network’s chief White House correspondent and host of The News with Brian Williams on CNBC and
MSNBC.

After studying at
college, Brian took an internship with the administration of President Jimmy
Carter.  He holds an honorary doctor of
humane letters degree from one of my favorite schools, Bates College, and an
honorary Doctor of Journalism degree from Ohio State University. 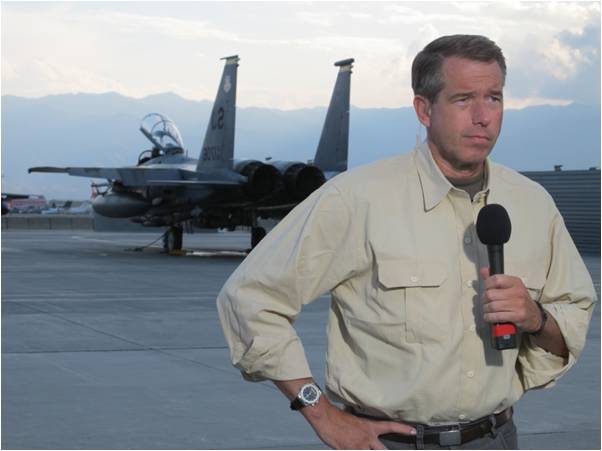 Most were given for his
work in New Orleans while covering Hurricane Katrina and its aftermath, and all
were awarded to Brian in only his second year on the job. 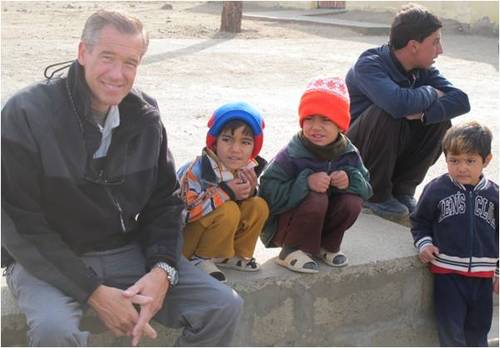 In 2006, Brian joined
Bono, traveling to three countries in Africa — Nigeria, Mali, and Ghana — to
report on the major issues facing the continent, including HIV/AIDS, poverty,
disease, and crushing debt.

On perhaps one of the
most historic trips of the Clinton presidency, Brian was the only television
news correspondent to accompany three U.S. presidents — Clinton, Bush, and
Carter — to Yitzhak Rabin's funeral in Israel. 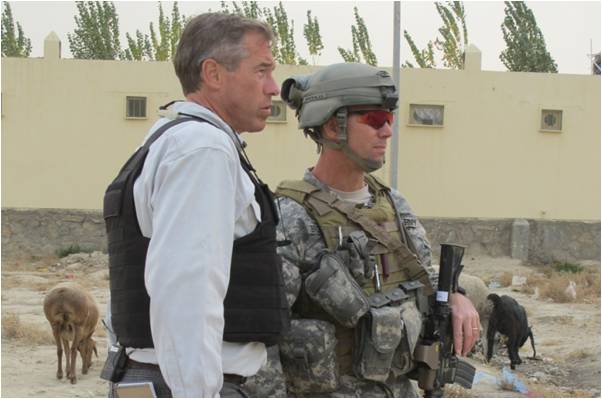 Brian is a member of the
Council on Foreign Relations in New York, and is also a member of the Board of
Directors of the Congressional Medal of Honor Foundation.  He has lectured at Columbia University School
of Journalism and the Lyndon Baines Johnson Presidential Library in Austin,
Texas.

In 2007, Brian was
listed among Time Magazine’s 100 Most
Influential People in The World.  He
lives in New Canaan, Connecticut, with his wife, Jane Stoddard Williams.

There is a reason “When
breaking news happens, America turns to NBC
Nightly News with Brian Williams."
America trusts Brian the way we once trusted Walter Cronkite.

“Walter Cronkite was the
architect for what this show has become,” Brian told me.  “Walter’s level of professionalism is what I
strive for every day.”

“I have been luckier
than most two have had two North Stars to follow – Walter Cronkite and Tom
Brokaw,” Brian admitted.

Like Walter and Tom, Brian
is the quintessential thought leaders and global citizen – and has thousands of
fans on Facebook
from around the world to prove it.

Today Brian Williams has
an enormous power – and a parallel responsibility – to help humanity.

Luckily for all of us, he
knows this well – and is highly focused on doing all that he can in his
position to change our world for the better.