It's not official, but it really is. Sort of like "unnamed sources reveal" just before heads roll at The White House or corporate suites. No one cops to whether it's true, but somehow in short order the news is validated.

Regarding NBC, I'll be up front: I've never been a Jay Leno or Conan O'Brien fan, though I met Conan and liked him towards the start of his career. He was friendly and I was impressed he was writing for Not Necessarily the News. Plus, his name was unforgettable, so I took note when he was later on the credits of The Simpsons and Saturday Night Live. 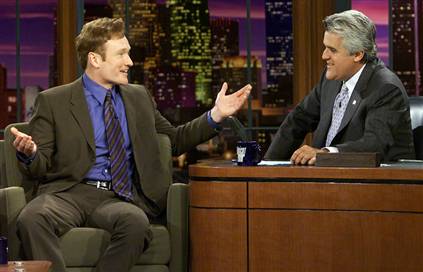 However, as much as I enjoyed our banter at a WGA meeting, I was shocked, along with America, when Lorne Michaels announced Conan would be NBC's replacement for David Letterman, when the latter jumped ship and moved to CBS to do The Late Show in 1993. I watched his debut with a mix of concern and anticipation and, though I'll be the first to admit he has been successful, I've found O'Brien's talents as a comedian and interviewer to be wanting, and perhaps it's finally caught up with him.

His comic bits have on occasion been quite clever, but an ingenious mind doesn't necessarily translate into a winning act. Don't forget almost all his predecessors had degrees of success as performers, whether as a stand-up comic, such as Letterman and Leno or a TV host such as Johnny Carson and Steve Allen. Which is why I usually cringed at O'Brien's forced attempts to be funny, waving his arms furiously or doing physical pratfalls to get a laugh. As an interviewer, he was not much better and couldn't compare with the wit of Carson or the interspersing of humor and intelligent colloquies served up by David Letterman, equally at home with movie stars, scientists and presidential candidates.

While Jay Leno had a notable career in stand-up and occasional movie roles, for the most part he was bland compared to Carson and the (for me) much more interesting Letterman.

Nonetheless, Leno mostly beat Letterman in the ratings, and Conan did well following an hour later, though in his case he was helped by the instability at CBS, facing three competitors, the first of whom, Tom Snyder, clearly appealed to a different audience. Craig Kilborn (hey, whatever happened to him?) had a similar appeal as Conan but didn't really build much on Snyder's ratings. In Conan's last year, however, his latest late night competitor, Craig Ferguson, caught up and on occasion beat him.

By this time, though, it had already been announced Conan had a lock on The Tonight Show in 2009, forcing Leno out even amidst his continually high ratings, which made NBC very nervous about whether they'd been right to oust him -- not to mention where would the comedian land?

So, in a now clearly reckless decision, the NBC suits destroyed their already faltering schedule with a so-called unprecedented groundbreaking move. They would keep Leno in the network fold, offering him essentially the same show with a prime time audience at 10 p.m. every night.

This made Leno happy and pissed off almost everyone else in the business. Certainly Conan couldn't have been thrilled. His show would now be more of the same, as opposed to the contrast The Tonight Show always offered coming after an evening of comedy and dramatic fare and the late news.

The creative community went rightfully berserk, losing five hours of programming. In an age of reality and magazine shows, where they'd already been sorely hit with fewer jobs, there were now five less hours, causing that many more people to file for unemployment insurance.

And the local stations, who depend on their late night news for much of their income now wondered, correctly as it turns out, whether Leno's show would be a bomb, causing a smaller lead-in, affecting their ratings and lowering their ad dollars.

A quick word about that. You often hear about networks purposely positioning shows, believing if a new series gets a lead-in from a hit show it has a much better chance. I've never understood that. In an age of TV remotes, which were introduced fifty or so years ago and certainly are the norm today, do people really stay captive to a network just because they choose to watch one of their programs? I have no difficulty reaching for my clicker to transfer to the network or cable channel that has the program I've come to like or because it's received enough buzz I want to check it out.

But such loyalty isn't usually the case when it comes to late night local news. I admittedly sit tight and watch the news wherever I was during the ten p.m. hour. So I can perfectly understand why NBC affiliates have been champing at the bit to get rid of Leno, whose show was cheaper to produce but which garnered much lower ratings than scripted programming and plummeted those for the local news in most markets.

Still, I don't blame Leno for Conan's ratings. After the curiosity factor wore off of his taking over The Tonight Show, he just isn't the contrast Leno was against Letterman. O'Brien's key attraction is being hip, which Letterman, though older, has always been. That, plus the fact Letterman is a sharper on-air figure and seasoned comedy professional. You may not agree, but he has whipped The Tonight Show in audience numbers and stayed even for the demographic group the advertisers prefer.

So, now NBC realizes they've got to get rid of Leno, but don't want him to go to another network, and since Conan isn't doing the job they have no problem scooting him back a half hour as if this is really going to solve the ratings problems.

I don't know how best to advise Conan, except, since his contract has deep penalty clauses if NBC screws him over, and ABC has announced it doesn't want him, I'd look at the ratings realistically before jumping ship to Fox, as has been rumored. Why would he think he'd do better there at the same hour against Letterman and now against Leno?

And for Leno, it's a bit embarrassing. He has to accept defeat and then be limited to a mere half-hour. Also, is he sure he'll be able to beat Dave now that he's been gone from the time slot almost a year? It's maybe not the same as an athlete, but remember what happened after Bjorn Borg and John McEnroe retired and then came back?

It must be great, though, to be an executive like Jeff Zucker, and make zillions of dollars, continually getting moved upwards even as you make decisions that have ruined the once top network.