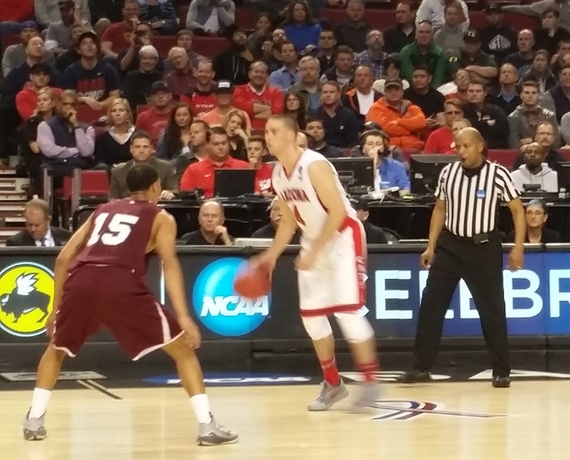 50 years ago, Portland hosted the 1965 Final Four featuring Princeton and Bill Bradley, John Wooden's UCLA Bruins as well as Michigan and Wichita State. The NCAA tournament returned to Portland on Thursday with four second-round games. The first session featured No. 2 seeded Arizona. The Wildcats dismantled Texas Southern 93-72 behind strong offensive games from Rondae Hollis-Jefferson and Stanley Johnson. Hollis-Jefferson had a perfect first half, scoring 16 points on 5-of-5 shooting from the field and 6-of-6 from the charity stripe, while pulling down seven rebounds. He finished with game-highs of 23 points and 10 rebounds. Johnson, who is looking more and more impressive as the season winds down, added 22 points on 8-of-11 from the field including 4-of-5 on three-pointers.

While Arizona looked good on offense, its defense left quite a bit to be desired. As coach Sean Miller indicated, "I'm hoping that we've learned a few things... so we can be the great defensive team which I think we've represented all season long." Johnson and Hollis-Jefferson have been improving their NBA draft stock, starting with their excellent play in the Pac-12 tournament. Long distance shooting has been one of Johnson's question marks (perhaps the only one), but in those last four games, he has shot 50 percent on three-pointers (11-of-22). Hollis-Jefferson's 23 points was a season high and he notched his third double-double of the year.

In the second game in Portland, Ohio State topped VCU 75-72 in a thrilling overtime contest. Another top-5 2015 NBA Draft pick, D'Angelo Russell led the winners with a game-high 28 points and added six rebounds.

Both teams had a chance to win it in the last minute of regulation, but Shannon Scott missed a shot inside for Ohio State with 23 seconds left. Then Treveon Graham missed at the buzzer for VCU and the game went to OT. In overtime, VCU was hurt by two late unforced turnovers, both coming on poor passes. Keita Bates-Diop hit a key three-pointer to give the Buckeyes a 71-68 lead with 2:34 remaining. VCU had a chance to tie the game at 73 but Graham's three-pointer went around the rim and out. Russell iced the game for Ohio State with two free throws.

The tournament committee did VCU no favors by matching them up against a Buckeyes team with two quality guards, one the best guards in the country. Ohio State handled VCU's Havoc defense a well as anyone has all season. They committed only 11 turnovers and point guard Scott was particularly effective with 10 assists and only three turnovers.

Carl Berman is a Managing Partner for NetScouts Basketball.