Today began my final day in Kronstadt. I decided to return to the lighthouse that had gotten the best of me the night the ice started screaming around us due to the wake of a large ship passing near by. That night (as documented in the post "The Ice Field" on tumblr.) I was unable to get a clear photograph of the lighthouse due to several factors: the darkness, my hands and equipment being so frozen nothing would work and our mortal fear for our lives as we waited for the ice to break apart beneath us. 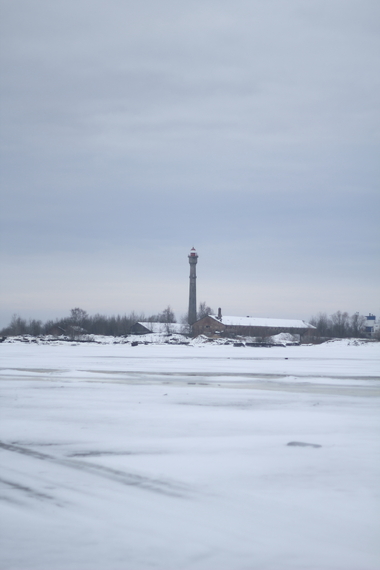 Packing up my gear I first headed to the most famous building on the island, The Naval Cathedral of Saint Nicholas to make an audio recording of its bells. Anchor Square sits directly in front of cathedral, which now features a massive anchor motif in stone, was once used to store the Navy's anchors. I set up my tripod in the middle of the square and waited. Services were just letting out and a steady stream of sharp dressed Russian Sailors exited the chapel forming mostly into 4 large groups at the steps of the church. A few sailors milled about the vast square that lay beneath the large domed structure that is crowned and decorated with gold.

At 12:15 the bells began, I couldn't help but smile at its catchy melody and watch the movement of bells and their ropes in wonderment. The chimes continued for 15 minutes with a dramatic pause in the middle. On its final note the resonance seemed to carry on for ages, this beautiful tone slowly dispersing through the air until you had to question if it was still their or just your imagination. 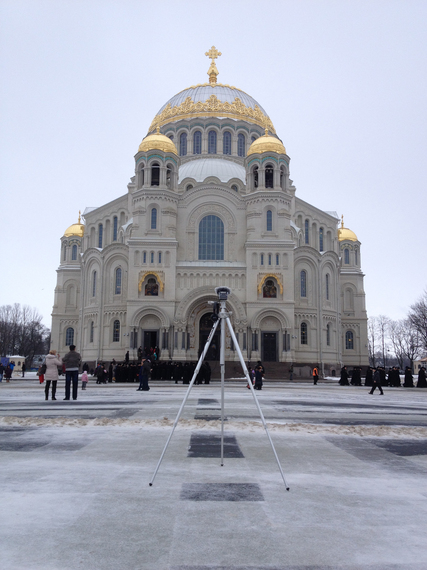 Packing up and heading out, I walk to the end of the island, returning to the public beach and pier I had visited on my first day. Where the road meets its end, two very strange lighthouses stand. More appropriately they might be called light towers, but who am I to rob them of their class. The Kronshtadt Fairway No. 15 (Summer Harbor) Front Range lighthouses are modular in design they are made up of cement rings that have been stacked to a determined height. When they were still in use a flame burned inside their square lantern housings. 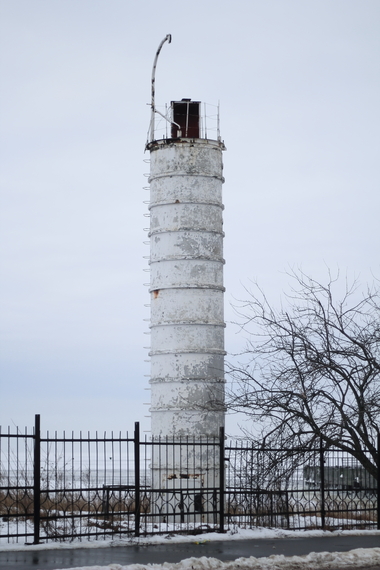 Cutting through the park next to the dock, I throw my tripod out onto the ice and climb down the wall. It has been just above freezing for a few days and a good deal of water has started to settle on the top of the ice from melted snow, which gives me an uneasy feeling, but I am confident a few days at 32°F wasn't enough to pull the sea from its arrested state, or at least I hoped this was the case.

Following some tire tracks coupled with footprints that seemed to be going in the direction of the lighthouse, I could already see the Kronstadt (Rear Range) lighthouse in the distance, so I started my trek across the ice. After a while I arrive at the strange ice field that had alarmed us that night, it seems like maybe there is some source of heat beneath the water at this point because the ice is really different and large pools of water have formed. The ice is broken skyward in several locations and I can see water in the cracks and voids. I have to make way to a point that looks safe and won't require me to get ankle deep in freezing water. 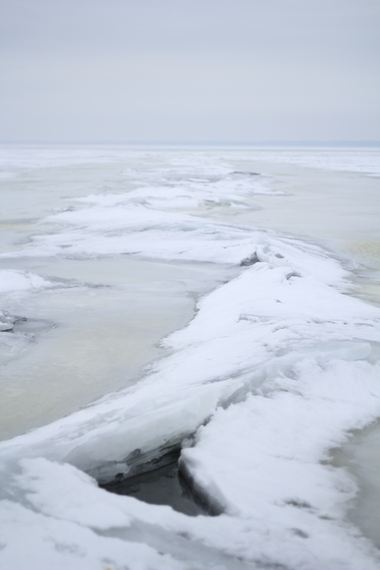 After crossing over I make a straight line to get as close to the lighthouse as possible, stopping at several points taking photos, if only to spite it. It was beautiful. Classic shape, faded red lantern house, the mass of the structure was grey cement and had several windows climbing its sides. The lighthouse is on one of the Military bases and is only accessible to view from the water / ice. Reaching the shore I continued on around the edge of the island past several collapsed buildings that appeared to be Soviet era. There was evidence of fisherman using this bank on a regular basis as a number of homemade tables and fire pits sit amongst the trees. The stable ice ended right at the cape of the island. Beyond this point is a large channel of crushed ice where ships pass from the open Baltic Sea into the Gulf of Finland to and from Saint Petersburg proper. 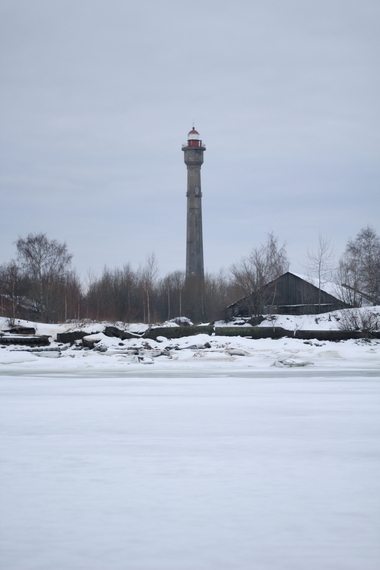 Where the shore ends a wide stone block wall runs west, it appears to be a very early wall as it looks more like a castle than a common cement walls of recent history. I climb atop it and make my way slowly to its end where it is met by a larger wall that encloses the base. I am now below the towering lighthouse I have come to see. After spending some time with the lighthouse I start my return. 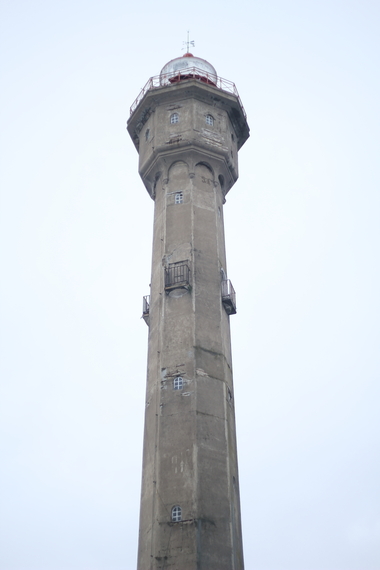 The Sredney Gavan' Rear Range Lighthouse can be seen in the distance with its faint light flashing in rapid secession. I stop at a good point and make a still video of it and this otherworldly scene. Gulls raise a fuss with one another and the wind blows steadily, ice cracks and shifts quietly and I can hear intermittent sounds of machines and men working, but only when the wind shifts.

Easing along, I cut up through the land and take a look at the abandoned buildings that occupy this unprotected corner of the island. They were lost to a fire. As I get back to the ice I hear the movement of ships and see the masts of a guide boat moving east. I set up my camera and audio recorder in hopes to finally capture the sounds that we had experienced late that night on the ice, almost in the exact same location I was currently. As the boat sailed, leading the way for a large cargo ship which was followed by another three, the ice lay silent aside from some strange whistling sounds which were very faint and did not spark terror in my soul. It was quiet.

This frozen sea is the thing I will miss the most about Kronstadt. 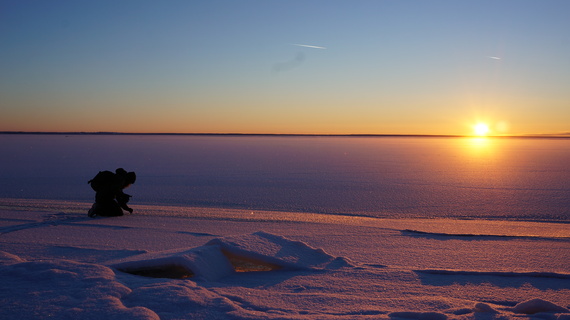 j.frede on the "Wild Side" of the island - Photograph by Mikhael Sator. 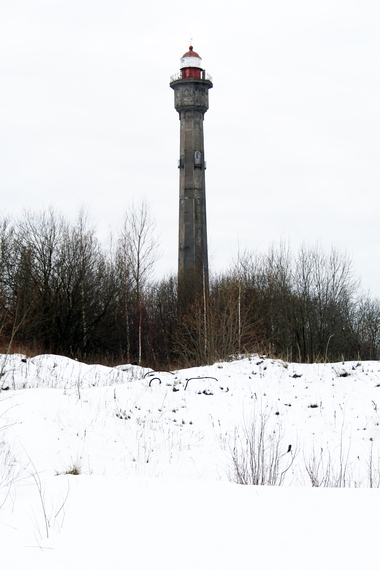