Jeffrey Lieber (Showrunner and Executive Producer NCIS New Orleans) pledged to give as much attention to the Food and culture, as the Forensics beginning in Episode 18 of NCIS New Orleans. 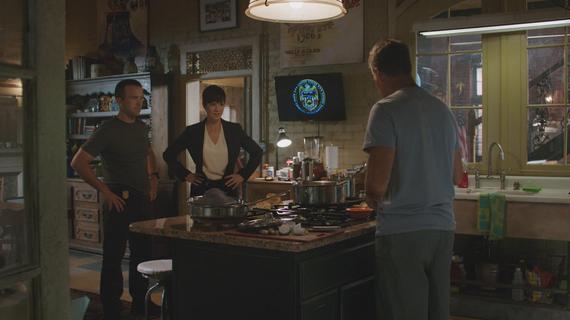 From L to R Lucas Black, Zoe McLellan, and Scot Bakula (His back anyway)

I recently took a few television shows to task for getting the food wrong, and so badly wrong within their worlds.

The one I came down hardest on was N.C.I.S. New Orleans. Those you who read me know how serious I am about New Orleans Cuisine and Culture. If you are going to be a part of that city you have to take the food seriously. If you want to explore the culture you have to know it.

The language, accents, neighborhoods, and foods all have incredible nuance.

I am not the only one who has noticed this. Twitter is filled with posters finding mistakes and my e mail box filled after the initial article. Food IS New Orleans and if that is not constantly incorporate correctly you might as well film in Cleveland.

Jeffrey Lieber (Executive Producer and Showrunner) and I took it to twitter, then e-mail and finally skype. I have to admit I was on him like a duck on a June bug. He surprised me when he asked... "How can we get it right?" 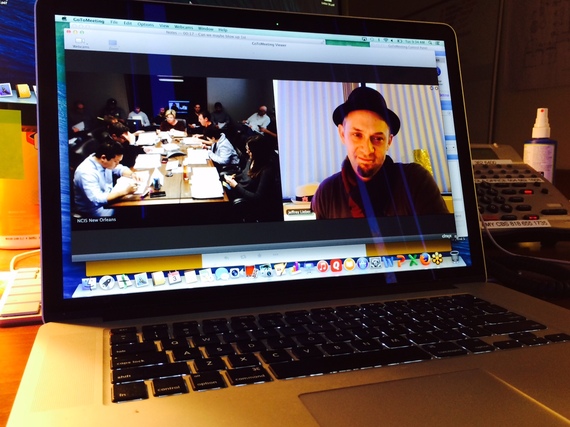 Meeting with the Staff Jeff Lieber on right

I sent over some articles about New Orleans food. While he gave himself a crash course in food I gave myself a crash course in NCIS. I binge watched episodes 5 to 11 and yes saw more errors. I cringed at a few of the cultural errors. I laughed at others. I had initially given up on them after Episode 4, so it was a lot of TV for me.

I then gave myself a crash course on Jeffrey Leiber. He was responsible for Tuck Everlasting and involved with a little show called Lost that some of you may have heard of. He has clearly earned his place in the business.

Then I read his rather wonderful show runner rules.

As a former actor he uses these rules and twitter as a way to engage with his audience. He understands the importance of the viewer.

So what are Showrunner rules?

Showrunner Rule #2: Black out the character names on a script. If after you can't IMMEDIATELY identify your characters voices, ya fucked up.

Showrunner rule #3 I'll take a great person over a great writer any day, I can fix writing, but I can't get back time an asshole wastes.

Showrunner Rule #106: Being a great staff writer is equal parts invention & mimic. Invention of story... mimic of the creators' voice/style.

Showrunner Rule #144: Backstory is neither plot, nor need, nor stakes. Backstory is just the sauce in which backstory/plot/need are stewed. (But it would seem important for rule #106?)

I created my own Sauce for Pride, his food back story. Dedicated fans can read it here.

There are over 200 Showrunner Rules to read them all go here.

So what does a Showrunner do in an interview...He asks questions. He learned as much about me as I did about him.

It ended up being an enjoyable conversation. Here are a few select quotes.

As stated Jeffrey pledged to give as much attention to the Food, as the Forensics beginning in Episode 18.

"When food is mentioned I am going to go back to the writers as I do on other things and say get more specific, why is it this? I am as guilty as anyone of using food as a crutch. It means something."

"Clearly from moment one New Orleans is the most shootable city I have ever shot in. It has been a conscious effort to at least make a nod to the food of the city. Because we built a kitchen in the squadroom I realized we had to give as much work to the food as we do to the forensics in that show."

"The new mandate going forward is look for the culture."

To me that means no more major gaffes. I am hoping the writers learn to think before writing. Who is this character, what backstory stew will determine his language, accent, food choices?

Because there was so much so wrong I created a lagnappe to apologize to the viewers. Like Bobby's dream, it explains everything.

The table is set for 3, there are linen napkins and a bottle
of Portuguese Douro present. The wine has been opened.

Chris and Brody enter, Pride motions for them to sit.

PRIDE
Chris and I owe you a huge apology
Brody.

CHRIS
This dinner is about being sorry,
that's why I tucked a bottle of
bubbly and that sorbet in the
freezer. You see, we been funnin
with you.

PRIDE
In New Orleans we take our food
very seriously and sometimes we use
to initiate a new resident.

BRODY
What do you mean?

PRIDE
Remember that morning I gave you
beignets and lemonade?

CHRIS
He didn't make no beignets those
was reheated from Morning Call,
they weren't even fresh (laughing)

PRIDE
(Holding back laughter) That
lemonade must have tasted like
battery acid after the sugar on the
beignet.


CHRIS
And Galatoire's they don't deliver,
I sent a friend for that list and
those oysters, we just kept hoping
you would call up and ask them to
deliver.

BRODY
Was there more?

PRIDE
(Both laughing now) So much more.
But Chris agrees, as of today we
are going to give you only the real
deal. No more jokes.

BRODY
(Smiling) I did eat some odd
things, but I didn't complain. I
thought that was the way it was
down here. How are you going to
make it up to me?

Pride bows and gets up from the table.

CHRIS
Wait til you see what he has in
that kitchen.

Pride returns with a rose cut stuffed pork belly on a
platter. Brody stands up, Chris follows. Pride sets the roast
down on the table, they clink glasses.

BRODY
All is forgiven. 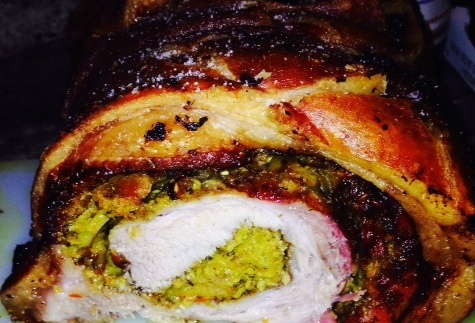