Sad, isn't it, that just one day before Christmas, we have to stand out in the cold and worry about getting another big lump of coal from our politicians?! But unfortunately it's expected that Obama will sign the National Defense Authorization Act (NDAA) into law right after the holiday. Since that's the same day the big sales start, few Americans will probably be paying attention to the police state being officially ushered in. 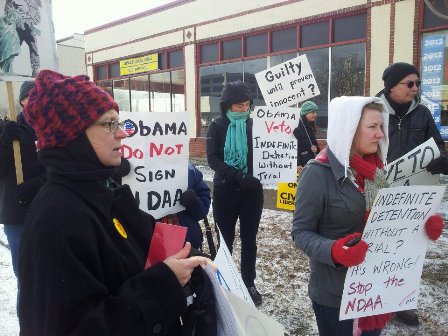 On December 23, however, we were still able to protest the despicable NDAA in front of Obama's Minnesota Campaign Headquarters. At the end of the rally led by members of "Occupy Minnesota" and the "Minnesota Committee to Stop FBI Repression", everyone taped their signs to the front window of Obama's campaign office, hoping he'd somehow get the message. Then we also made telephone calls to tell Obama's volunteer receptionists to act as his better angels and plead for him to veto the NDAA.

But a veto would be quite the Christmas miracle. Obama's expected signature will not only de-link the "war on terror" from its original justification, the 9-11 attacks of more than a decade ago, to ensure the "long war" does not end, but it will keep Guantanamo open indefinitely and turn the whole world into a battlefield, including our own backyards here in the U.S. where citizens will stand guilty until proven innocent. 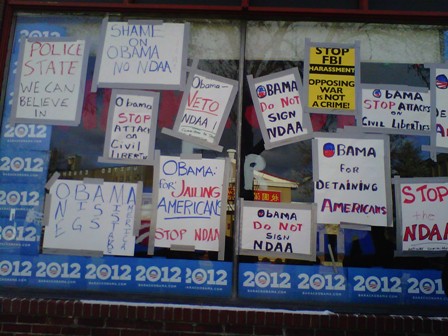 What's the worst that could happen as a result of the congressional rubberstamp broadening the war and allowing indefinite military detention of American citizens as "enemy combatants"? Can it happen here? It's interesting to see what journalist Joshua Phillips learned from research for his new book: None of Us Were Like This Before: American Soldiers and Torture, a harrowing description of the torture of prisoners in Iraq and the deep psychological scars it left on the members of one battalion who dispensed pain to their victims. When asked how this came about, the author says that almost all the soldiers he interviewed cite the main reason for the various torture abuses as the climate of "permissiveness" that began when they were told they did not need to follow the Geneva Conventions anymore. (It should be recalled that Bush's Office of Legal Counsel lawyers Robert Delahunty and John Yoo had written their memo on Jan 9, 2002 stating that the Geneva Conventions did not apply to "non-state actors", i.e. al Qaeda, Taliban and other "terrorist" suspects. Bush consequently signed a directive the following month implementing this OLC memo, and the word went out that gave rise to the abusive conditions at Guantanamo and other military detention sites.)

The term I've personally used for this new culture of "permissiveness" is "the green light". Unless you worked in the system, you might not recognize what the insidious "green light" is. I've tried to warn over and over that the green light will eventually go out and the people down the line who have gone along under its influence instead of resisting in accord with their previously ingrained sense of right and wrong are likely to pay a heavy price. Phillips' book documents that soldiers are now taking their own lives years after having participated in the abuse occasioned by the culture of permissiveness under Bush.

Instead of extinguishing the green light, Obama's signing of the NDAA could well signal an even worse one being turned on than occurred with Bush's torture memos. 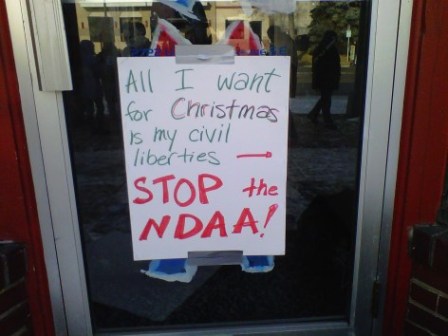