Illustrator Neal Fox depicts nightmarish pop culture mashups, at once idolizing and humiliating humanity's greatest legends real and imagined. His twisted visions include "Transvestite Nazi Cannibal Sadismo Asylum of the Damned," an imaginary film with the tagline "Bloodthirsty ladyboys of the Third Reich," in which fishnet-clad S.S. soldiers spew blood from gaping maws.

Irreverent yet pulsing with obsession, Fox's depictions of iconoclasts from Francis Bacon to Johnny Cash exposes the ways in which lives are transformed into legends. Fox rips these figures from their context and tampers with cultural signifiers like a boozed up plastic surgeon.

Author Richard Milward wrote of Fox's work: "His pieces are like illustrations for an imaginary game of Chinese whispers, played between the Ghosts of Bohemia Past, Present, and Yet to Come. Like a shot of absinthe to the brain, they enlighten and mystify in equal measure, in the most eye-popping ways imaginable." We reached out to Fox to learn more about his dark and delicious depictions.

(Scroll down for a slideshow of Fox's work.)

HP: What is your favorite way you have heard your work described?

NF: A girl who came to my studio recently said I exist "in a creative landscape bordering the sordid confines of George Orwell’s Room 101 and a terrifying LSD hallucination'' which i liked, though I would prefer to think of it as a fun LSD hallucination.

HP: Your work often touches on the relationship between mythology and technology. How has the web altered our relationship to symbols and myths?

HP: Your work deals with a lot of pop culture icons and weirdos. Who are you obsessed with in the current pop world?

NF: There's this guy you might have heard of called David Bowie. I am very into him at the moment, or more specifically, the idea of Ziggy Stardust. In England he is all over the media right now because of his new album; he is more of a national institution than the Queen. I'm reading a great book called "Ziggyology" by Simon Goddard, which connects all the different influences that fed into the Frankenstein's monster of Ziggy, from Kabuki theatre to Vince Taylor to H.G. Wells. Its a bit like "Lipstick Traces" by Griel Marcus but not as highbrow.

HP: How would your childhood art teacher describe you?

NF: Probably as a lazy arrogant git. I used to bunk off from lessons a lot and they would catch me outside playing football or hanging about looking moody in a leather jacket. One of my nicknames at school was MacGyver! 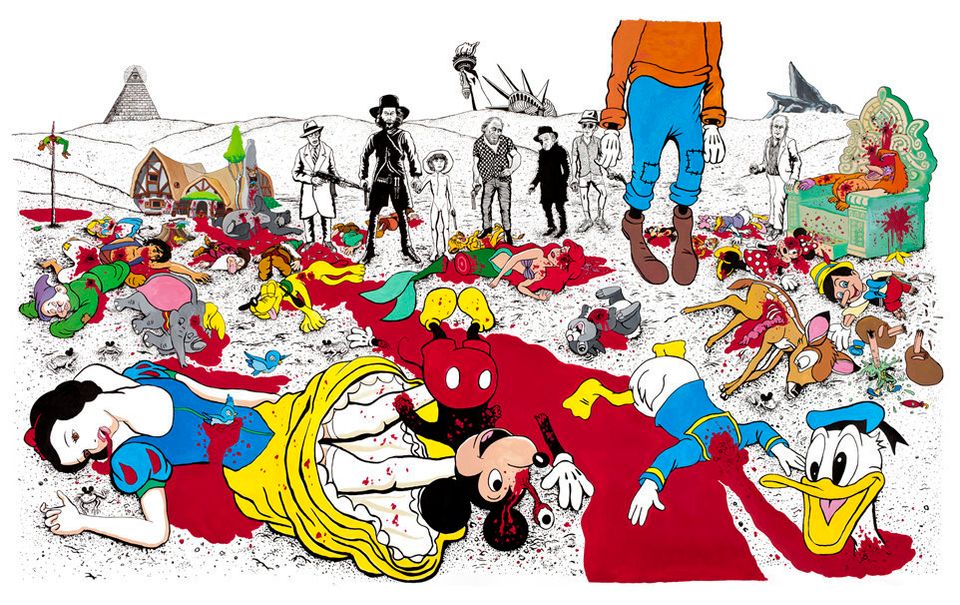