I used to get peeved when I called Federal Express and their voice answering system said, "Please hold. A representative will be with you momentarily." I thought, "Well, that won't do much good. I won't be able to say everything I have to say during just one moment."

The primary definition of "momentarily" is during one moment, not in one moment. Thus, when I write "You Will Die Momentarily" I mean that your transition from life to death will occur rapidly, not imminently. The dying process may or may not take a long time (actually it already started the moment you were born), but the transition from life to death occurs in a single moment, suddenly, momentarily.

How often should one think about his or her upcoming rendezvous with non-existence? -- Ira Israel

Our perception of time is curious. Ponder this:

Fact: You didn't exist for millions of years.

Fact: You were born and your body will inhabit a minuscule spot on planet earth for a finite period of time.

Fact: You will die and no longer exist for millions of years again.

Thus, in relation to the time you spend not being alive, your life is obviously precious. Thinking on this grand scale makes every day a gift, something to be cherished. Right?

So what do we learn as children in our society that pushes these facts to the back of consciousness only to reemerge after a near-death experience such as the one Ric Elias describes in his beautiful TEDTalk?

We all know that living life is fatal. And yet so many human beings -- particularly teenagers and drug addicts -- seem to live their lives as if they were invincible.

Why do so many human beings believe that hoarding material possessions will somehow stave off their future non-existence? Secret: It won't. "You can't take it with you."

Why do so many human beings believe that leaving a legacy will make them feel better about their fleeting existence? Secret: You don't worry about what other people think of you when you're dead.

Why do so many human beings believe that filling up their lives with distractions will engender lasting happiness? Yes, it could be somewhat overwhelming -- in that immature Woody Allen way "What's the point? Why do I have to do my homework? The universe is expanding... " -- to constantly think of your future non-existence, but on the other hand, is it possible to create a meaningful life if you don't realize that you're living on borrowed time?

I guess the best way to sum up my question is -- and goshdarnit, this is the one time that I wish I had paid attention during that class on Heidegger -- how often should one think about his or her upcoming rendezvous with non-existence?

I'm uncertain of the proper dosage of death needed to appreciate life. This is one of the many blessings/curses of human consciousness. My cat, Helen -- to the best of my knowledge -- has no inkling of non-existence. She does her best to avoid pain, keep her belly sated, play when feeling playful, and get a decent amount of rest, but she appears to have no existential issues whatsoever. It is only human consciousness that provides such intense biases. 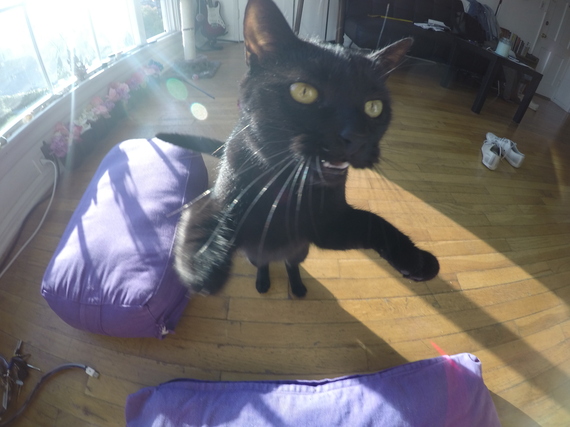 In my humble opinion, there are two main problems with death:

1. Consciousness fallaciously informs us that we would miss things. "Crap! I can't die now! I haven't climbed Mount Everest yet!" This is one of those "Half empty/Half full" scenarios. Yes, there are obviously infinite phenomena that you will miss. Duh. But why not focus on the wonderful things you did experience instead of the things you imagine you woulda-coulda-shoulda-didn't experience? Even dour Wittgenstein's last words were, "Tell them it was a wonderful life."

2. Although being dead is painless, the dying part of the process is often quite painful. Sometimes it's even a bloody mess. Sometimes it appears to be interminable. For the human body is a wildly resilient machine -- just ask any of the millions of people who fail at killing themselves every year.

However... however... almost dying -- almost as in horseshoes and hand grenades but not in pregnancy or running a marathon -- as Ric Elias recounts in his TEDTalk, is usually quite a consciousness-raising event. It immediately takes one off of autopilot and allows appreciation of our short time on earth to be in the forefront of consciousness; a near-death experience is the one transformational incident that can arouse or goad one into replacing resentment with gratitude.

Ah... the simplicity of that phrase... "Replacing resentment with gratitude."

"You can't pull all of the weeds in the garden, but you can plant flowers," says Rick Hanson. You can't weed out all of your woulda-coulda-shoulda-didn't resentments but you can plant little flowers of gratitude. And if you tend to your mental garden every day, there's no telling what beautiful little thing might sprout.

The thought "Nobody gets out of life alive" foments compassion.

And it will all be over sooner than you ever imagined. The final moment will be extremely sudden. Will you be able to say, "Tell them it was a wonderful life"?

"But the long-term prognosis is uncertain," he qualifies in order to prepare himself for something suddenly going awry.

Big smile. What I seemingly lack in compassion I compensate for with lightness.

I do find it sad that it takes near-death experiences to jolt people into appreciating the remarkable gift of life. Anyone who has almost died will tell you that whatever experience almost killed them wasn't very much fun. And yet, without that experience is it possible to truly know that every breath you take is an absolute miracle?

CDC: Kids Ages 5 to 11 Should Obtain Booster Of COVID-19 Vaccine