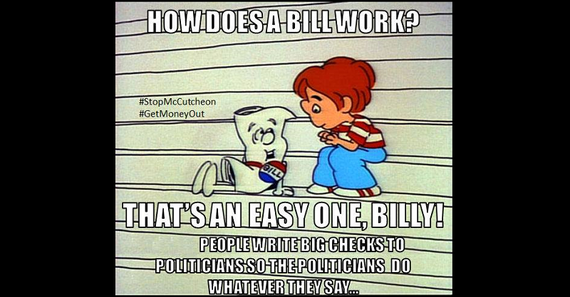 The arc of American history is best seen as a march to expand the rights of all citizens to have an equal voice in our political system.

Generations of abolitionists helped ratify the 13th, 14th and 15th amendments to ensure equal protection under the law for all men and the right to vote regardless of race. Generations of suffragettes fought for nearly 150 years to ratify the 19th Amendment to gain every woman's right to vote. A generation of civil rights leaders made good on the Constitution's promise to ensure ballot access to all races with the 24th Amendment. And a generation of war veterans amended the Constitution to lower the voting age for our nation's youngest soldiers.

America has a proud history in which nearly every generation has amended the Constitution to help expand democracy. Now it's our generation's turn to address perhaps the most important issue of our time - restoring government of, by, and for the people, not bought, paid, or sold to special interests.

The Supreme Court, in a series of decisions starting with Citizens United and most recently in McCutcheon, paved the way for unlimited and unaccountable dark money that has most Americans feeling like their voices are no longer heard.

The "Democracy for All" Amendment, to allow Congress and the states to place practical limits on money in elections, had its first historic vote in the U.S. Senate last week. It received 54 votes, the most ever for a constitutional amendment on campaign finance, but 13 short of the threshold needed to pass.

Despite our country's tradition of expanding democracy through amendments, there are 42 Senators who don't want a more inclusive democracy. They claim that the increasing sums of money from big donors to finance elections is mere free speech, which means that billionaires and multinational corporations deserve more influence and access to set the political agenda than the teacher, the barista, or the hairdresser. The vast majority of Americans - 73 percent in the most recent poll - disagree and support a constitutional amendment. Even larger percentages of young Americans, 78 percent, support bans on corporations from spending unlimited money in elections, and 71 percent think the system is rigged toward the rich, according to Harstad Strategic Research.

Democrats and Republicans have already raised over $1 billion to spend in this year's midterm election. Outside groups that can raise unlimited money, and often do not have to disclose their donors, have spent $200 million more. That figure is expected to rise to a record $1 billion with some $300 million coming from undisclosed sources.

These ever-growing sums create a dependence on an ever-smaller cabal of donors. In 2012 a mere .4 percent of the U.S population contributed 63.5 percent of all funds to parties and candidates. Fewer than 200 people controlled 80 percent of all super PAC money.

In light of these setbacks, a bipartisan coalition of Americans has already passed resolutions in 16 states, 550 cities and towns, who with more than 200 members of Congress and the President are calling for an amendment. Alan Simpson, a former Republican Senator from Wyoming, supports an amendment as do over 130 Republican officials around the country, and polls show majorities of Republican voters agree.

Historian Doris Kearns Goodwin recently said, "We despair over money in politics, which I do think is the poison in the system. If I were younger, that's what I'd be doing - leading a constitutional amendment to get money out of the system."

A constitutional amendment isn't easy and should only be undertaken to address gravely serious issues, but with over 225 years of American history and democracy at stake, we must accept the challenge.

Matthew Segal is the founder of OurTime.org, a nationwide non-profit voter empowerment organization for young Americans. He can be followed on Twitter @ourtimematthew