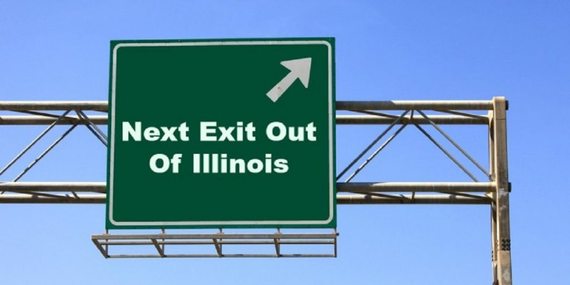 If you're a young Illinoisan, it's likely you want to get out of the state. If you're an Illinoisan of any age, it's even more likely that you think your home state is headed in the wrong direction.

The third installment of the fall Illinois survey by the Paul Simon Institute at Southern Illinois University-Carbondale finds nearly half of Illinois residents would like to leave, with 29 percent saying it's likely they'll move within the next year.

"There are lots of reasons why people want to leave," said David Yepsen, director of the institute. "Not much can be done about the weather but policy makers can do something about perceptions of the quality of services, tax competitiveness, tax fairness and educational and job opportunities."

Of the 47 percent who said they'd like to leave, 42 percent identified either taxes or government as their motivation. Only 16 percent cited the weather as their reason to leave and 13 percent said jobs and education had them looking elsewhere.

Younger respondents were more likely to express a desire to leave the state, and Yepsen cited this as the most troubling aspect of the poll. Previous results from the fall poll covered the presidential, U.S. Senate and comptroller races and overwhelming support for term limits and redistricting reform.

"Policy-makers argue over whether people are leaving or not," Yepsen said. "The most troubling finding in this poll is that so many younger people are thinking about it. That's the state's future."

The results are consistent with a 2014 Gallup poll that found 50 percent of Illinois residents said they would leave the state if they could. Illinois had the highest percentage of residents who wanted to leave among all 50 states. Gallup also found in 2013 that 19 percent of residents said they were extremely, very or somewhat likely to move in the coming year -- 10 points lower than this year's Simon Institute result.

Here's a look at the results.