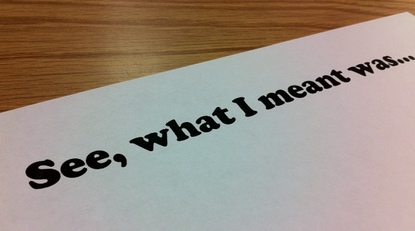 Only minutes prior to the conclusion of the session, Ravitch "Barbara Waltered" Garcia and Weingarten with the following question:

The Walton, Gates and Broad Foundations are at the forefront of the privatization movement. Will you commit not to accept funding from them and not to collaborate with them? [56:56]

She then asked for their "yes or no" answers:

A beautiful moment. The audience stood and applauded first for Ravitch's question and then for the Garcia-Weingarten response.

The session soon ended, and Garcia wasted no time backing out of that one.

In fact, in a blog post entitiled, "Gates Keepers" dated three days prior to her conference appearance (??) and categorized as , "I just had to say this," Garcia defended her right to say "yes" and mean "no."

In her oddly-dated post, Garcia attempts to set Gates apart from Walton and Broad. In reality, NEA has no problem with refusing money from Walton because the Waltons hate unions.

As for the Broad Foundation, Garcia criticizes it as "all charters all the time."

But when it comes to taking cash from the Gates Foundation, Garcia states that Gates is "complicated."

She might as well have noted that with "all charters all the time" Broad, it is also "complicated" since some NEA locals have accepted Broad funding in the past. But let's just set that aside for now.

As supposed evidence that Gates can be trusted (and that accepting his money is fine), Garcia cites part of the Gates Foundation website that offers a brochured Gates sell:

We are focused on results. Those that can be measured. And those measured in ways beyond numbers. We see individuals, not issues. We are inspired by passion, and compassion for the wellbeing of people. Our methods are based on logic, driven by rigor, results, issues, and outcomes. Our innovation means trying new things, learning from our mistakes, and consistently refining our approach. Our strategies help us define our path to success, but our effectiveness is based in the aggregate power of our initiatives to impact holistic change.

That is enough for Garcia. She considers Gates trustworthiness as established.

She does not add that the Gates Foundation is clear about making grants "according to our funding priorities" and by directly contacting organizations to invite them to apply for grants under those Gates-determined priorities.

As evidence of Gates' goodness, Garcia notes that Gates funds "the National Board for Professional Teaching Standards (which the NEA helped found)."

Let's talk about Gates money and National Board.

His speech focused on one of his pet investment priorities: the Common Core State Standards (CCSS).

Gates wants it-- he buys it.

That's not so complicated. But it certainly does afford Gates some power-wielding influence. Indeed, the day before Gates' speech to the National Board, he dined with 80 senators.

Billionaire Gates has the ear of scores of influential individuals. It's a great exchange: You give us money; we give you an audience. Another example: in summer 2008, Council of Chief State School Officers (CCSSO) President Gene Wilhoit asked Gates to fund CCSS. In November 2010, Gates offered a CCSSO keynote on CCSS. Gates was listed as a CCSSO "co-chair and trustee."

By way of his wallet, Gates is allowed time and again to voice his ideas on test-score-driven, market-friendly education "reform."

Since 2003, Gates has given the National Conference of State Legislatures (NCSL) $2.3 million. In 2009, NCSL "co-chair" Gates gave a keynote in which he said, "Without measurement, there is no pressure for improvement."

He also urged legislators to lift caps on charter schools.

And of course, Gates did not want to miss an opportunity to plug CCSS as a hub for "measurable" reform:

We need to take two enabling steps: we need longitudinal data systems that track student performance and are linked to the teacher; and we need fewer, clearer, higher standards that are common from state to state. The standards will tell the teachers what their students are supposed to learn, and the data will tell them whether they're learning it. ...

This is encouraging--but identifying common standards is not enough. We'll know we've succeeded when the curriculum and the tests are aligned to these standards.

It is no secret that NEA is all in for CCSS. So, the fact that Gates is all in is no problem for Garcia. As of May 2015, the Gates Foundation has paid the NGA Foundation $4.6 million for CCSS implementation.

Gates was asked to foot the bill for CCSS before there was a CCSS. Gates agreed. And in the following several years, NEA has raked in upwards $5 million for a CCSS that surely did not originate with NEA. Yet Garcia maintains, "Outside funders don't drive our mission.We drive funders to our members and their ideas...."

Let's do another keynote:

In February 2011, Gates gave a keynote to the National Governors Association. One of his suggestions was to lift caps on class sizes. He said that having the "more effective teacher" teach a larger class (from 20 to 26) would be better on the budget-- and he said it would produce "better student outcomes." (See video #2 on the playlist: https://www.youtube.com/watch?v=7f7AI2q_WhE&index=2&list=PL59A85238C8B52C62 )

In addition, it is worth noting that in February 2011, the Gates Foundation gave NGA $1.3 million "to work with state policymakers on the implementation of the Common Core State Standards, with special attention to effective resource reallocation to ensure complete execution, as well as rethinking state policies on teacher effectiveness."

Gates is able to not only pay for his vision of American public education; his money provides him ample keynote addresses to speak his vision to influential individuals. This ability affords Gates a power over American education not to be underestimated.

But Lily Eskelsen Garcia is willing to defend NEA's continued receiving of Gates funding on a technicality:

And she completely glosses over her verbal agreement at the NPE conference to no longer even collaborate with Gates.

Her version of Ravitch's question is botched on her blog, but the point of her unswerving Gates allegiance is clear:

I was asked at the NPE conference to give a simple answer to a question that is not so simple: Would my union, the NEA, accept Gates grants? The fact is that, no, NEA does not directly take funds from the Gates Foundation. ... Our union organized an independent foundation for the very purpose of connecting philanthropists with the creative work of our member practitioners in classrooms across the country. ... And in service to those members and those students, we will continue to work with powerful partners, foundations and institutions dedicated to educational innovation, educator empowerment, student health, and parent engagement. Over the years, we've helped educators connect with many donors, including the Gates Foundation....

Date: July 2013
Purpose: to support the capacity of state NEA affiliates to advance teaching and learning issues and student success in collaboration with local affiliates
Amount: $2,446,500

This $6.3 million was paid to the NEA Foundation but directed toward NEA members/affiliates.

And, to be clear, Garcia was not asked by Ravitch if her union, the NEA, would accept Gates grants. She was asked to "commit not to accept funding from" Gates "and not to collaborate with" Gates.

To this, she said yes.

But she meant no. 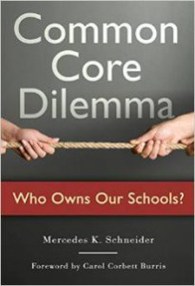