It's Tuesday and I'm already a little surly. After four days of sneaky summer sun, the drizzle, and the bone-sapping creepy cold, is back in Portland. The People's Farmers Market, that bastion of year round local produce, isn't until tomorrow. I've just done 1.5 hours of hip- and shoulder-stretching in yoga, and ridden my bike home in the rain.

All I want is a bowl of hot Vietnamese pho soup...that someone else cooked.

But I am on the week of eating in, and if Cathy Erway can do it, I can do it.

I open the cupboards. Since I just moved from overseas, there aren't any canned goods, and because of the leaching of BPA from regular cans (Eden Foods is a good brand that has taken some BPA-shielding measures in their cans - though not the tomato products) there won't be many cans any time soon.

There's half a box of brown rice (takes too long!), a corn flakes box with corn flake dust, and some packages of gluten free flour mix. One portion of Tinkyada gluten free pasta.

The refrigerator is almost as bad. Two eggs from a local farm, soured yogurt also from said farm, farm milk, some wilted-looking greens from last week's People's haul, the butt ends of two bok choy that I somehow convinced myself I would use, a half-dead half carrot, a parsnip, and a red onion. 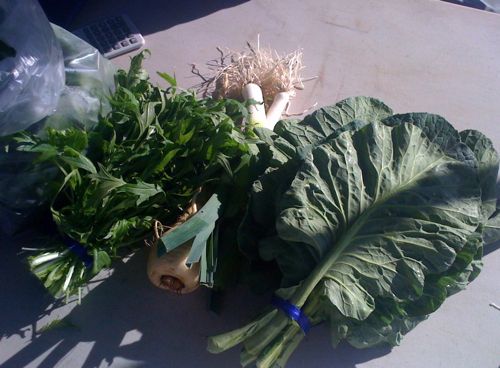 And there's a jar of peanut sauce with two tiny spots of mold.

I really want to go out to lunch. But I boil up the pasta, chop up the flagging greens, dice the onion and shell about twenty peanuts.

I pan roast the peanuts, add olive oil and hot pepper flakes, sauté the onions and add the greens. In a strong light, I inspect the peanut sauce. The mold spots seem to be located on the inside of the bottle lip, where stray bacteria probably entered via a previous user's spoon.

I dissect away the mold and dump a couple of tablespoons into the thoroughly wilted greens. When the pasta's done, I drain it and add it to the wilted greens mixture, sprinkle on sea salt, and a drop or two of Tabasco.

O.K:, Cathy learned to cook from eating in, and I only learned to improvise. Heavily. I eat up my noodle stir fry and seem none the worse for wear. The post-prandial reward is a cup of coffee with fresh cream.

Dinner, however, is less than six hours away.