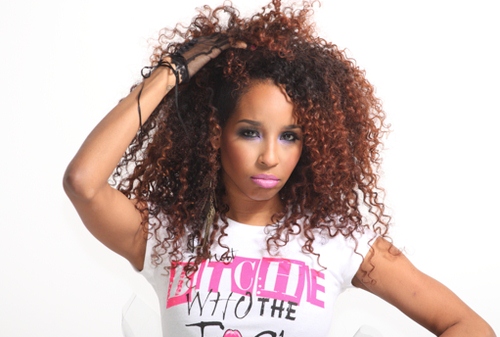 Every day there is someone out there that is in a situation that they don't want to be in. When I say that, I mean they are working a job and not a career. They are paying the bills and not finding personal and/or professional fulfillment of any kind.

We end up becoming slaves to these material things that we will outlast -- cars, jewelry, purses, shoes or whatever other material items that reflect the lifestyle we want to live. This job might be paying you the money to support this lifestyle, but is it what you truly want to be doing?

Born as Necole Kane on the eastern shore of Maryland in a small town called Cambridge -- this is the woman that we know as Necole Bitchie. She is a great inspiration not only to women, but to us all. Her story is filled with sacrifice in exchange for the journey and adventure of discovering herself and her own destiny. Knowing yourself is important, right?

Necole has soared to become one of the most famous and recognizable bloggers out there. Her name, also her brand, has become synonymous with celebrity gossip that unlike with most bloggers is verified news. That's probably the reason why when you read her stuff -- it doesn't have that manufactured feel to it, because it isn't.

Her brand doesn't stop there; soon you can expect to see a lifestyle brand from the young blogger/entrepreneur.

Necole and I conversed about the sacrifices she made to be the woman she is today.

Thank you for taking the time out to talk to me today, Necole. I truly appreciate

I appreciate it as well, Bryan. Thank you.

So, where are you originally from Necole?

I grew up in a very small town on the eastern shore of Maryland called Cambridge.

What are some of your most important childhood memories that lead you to being the woman that you are today?

My mother worked so hard, so I spend a lot of time with my grandmother. She was the first business owner that I ever knew. My grandmother owned a barber shop and she cut men's hair all day. I felt some type of power in that. She was sitting there and she'd laugh a thunderous laugh all day and they admired her. They'd come in everyday and pile into her shop and talk about the latest. She really guided my steps. I was 16 when she passed away -- I was lost after that.

When a tragedy takes place, we're lost. Tragedy places a person at a position of needing to decide what their next move is going to be. Who was Necole Bitchie at that time of being at a crossroad?

You know how a stage play has three acts? I feel like in my life right now, I'm one the fourth act. At that point in time it was right after my mom had passed I had lost everything that I felt was important in my life. It was when I was going to a job everyday and when I was in school, which was when I was at a crossroad. That's when I had an epiphany. I received an email from a lady that was basically saying that we shouldn't be held down by material things. We want to achieve certain goals, but we have a car payment that we're about or we have to make the rent -- we have all of these material things that really don't matter and are holding us down to going into that job every day. I started to think about how true this was. I don't have any kids, I'm still young, so why am I working so hard every day and who am I working hard for? I'm definitely not working this hard to pay a car payment. Two weeks later, I started selling all of my furniture. I left school in my last semester, I quit my job and I was headed to Detroit.

Why Detroit? What was there?

I chose Detroit, not because I had a plan -- it was a place where I didn't know anybody. I felt like that was the best place to get to know myself and really find out who I was.

What did you do once you were there?

Initially, I was in the entertainment industry -- I found an internship opportunity. My drive is pretty intense; so once I was out there I was moving pretty quickly.

You were meant to be a free spirit, not held down to commitments that don't seem as pivotal to the direction your life is going in.

Exactly. I've spoken to a woman who didn't go after her dreams because she was worried about what she was going to do with their house full of furniture. Really? You're going to let a house full of furniture stop you from following your dreams? If you said a husband and a child then I get it -- but, you're not sure what to do with your furniture? I sold everything for $700 and just kept it moving, I couldn't let that hold me back from achieving what's right for me in my life.

Wow, Necole. You have redefined the meaning of the word fearless in a few different respects.

I do have to say this though -- there are going to be moments of discomfort in your life because there is going to be a struggle. There will be times where you have to sleep on other people's couches and that will take away your pride. You'll be asking those friends to use their couches while they are doing their routine of going to and from work and they're moving up, all the while you're struggling.

You swallowed your pride and made sacrifices to achieve what you wanted. That's truly inspiring.

I did the sleeping on couches; I was always in a different state whenever someone called me. I didn't have a place. They all looked at me as though I didn't have myself together. But, look at me now because of that sense of sacrifice. I say that because when people don't see a return on their going out on a limb and going for their dreams immediately -- like if they don't see results in three months, they're ready to stop trying and go back to the land of familiar. It takes time to get that breakthrough.

It does take a long time. That is all due to the fact that we are participants in this society of instant gratification. We want it now and we don't want to wait. In a lot of instances, we don't even want to truly work for it.

When it comes to these celebrities that are revered, people don't do the research on them and their story. Everyone had a struggle before they made it. It might seem like celebrities go from nothing to something within the blink of an eye, but there was a journey.