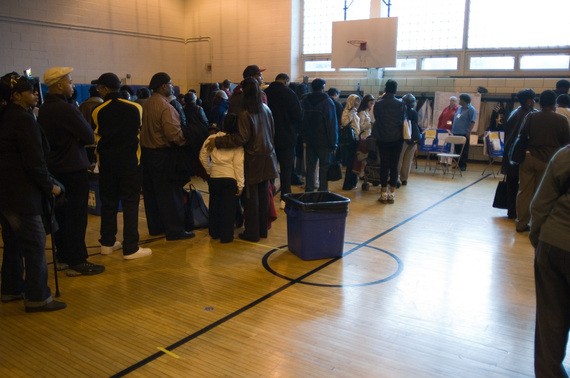 You can vote because black folks died so you could do so.

Or vote because President Obama browbeat you into it. You figure you can do him a solid after all the flack he's caught over the last seven years.

Or you can vote because flagrant racism makes you furious. Voting is a jail-free way to manage your aggression and just maybe, make a difference.

That's the message Brandon Levston hopes other young black people take from the video he captured Sunday of a racist road-raging driver. The viral video, which had more than 2 million views before Facebook inexplicably took it down, still circulates on YouTube and Instagram.

Vote because when the name of a presidential candidate doubles as a provocation, not voting could cost you your black card.

"Trump, Trump, all the way," chanted the white man who has been identified as Robert Neil Thompson of Memphis. He walked up on Levston, 29, as he sat in his car in a Memphis mall parking lot. Thompson accused Levston of cutting him off in traffic.

"Black lives don't matter, there ain't no proof," Thompson said. "Just because you say something don't mean nothing."

"Black people were bought by a contract and we got ripped off because y'all should have gotten returned when there was evidence and proof that y'all couldn't do anything."

Thompson threw in a White Lives Matter, sprinkled in the n-word and then closed his tirade with slurs against trans and gay people because of course.

Levston calmly recorded the bigoted blowhard and when Thompson walked away, turned the camera on himself. "That's exactly why y'all need to get out and vote."

On Monday after a wave of TV interviews, Levston stressed that he wanted young black people like him to put the explosive incident in a political context.

"I actually know a lot of people that fit my same demographic who believe that going to vote isn't important or that it's rigged," said Levston, who has two young children.

He's not trying to hear that.

"You got to be willing to do whatever you can to make some kind of change."

Yes, you may have to wait in line at the polls, like many Cincinnati voters did Sunday in a queue that stretched for more than half a mile. And this is even though waits should be no longer than 30 minutes, according to a 2014 Presidential Commission on Election Administration report.

Hum the Negro spiritual "We Shall Not Be Moved" to pass the time. (If you're in line when the polls close, officials must allow you to cast your ballot. Stand your ground.)

Outside the polls you may face gun-toting Trump supporters or poll watchers. Strengthen your resolve with a good word from Rev. William Barber, a prophet and leader of the Moral Mondays movement in swing state North Carolina.

No, you can't vote by text. Ads telling voters to text the word "Hillary" to some number are fake.
On Monday, national polls showed Hillary Clinton with a small lead over her opponent.

But regardless of who wins, remember it's not remotely over. White voters' racial animus, amplified by an interminable and amazingly brutal presidential race, is too raw to heal quickly, if ever.

"If you think that if Trump loses Tuesday and everyone goes home, we're sadly mistaken and we're not prepared," said Tami Sawyer, a social justice advocate in Memphis.

"We're not at a point where conversation and and cooler heads are prevailing. People aren't listening to each other."

Levston, who cast his ballot during early voting, isn't naïve. He doubts that his video convinced politically apathetic peers to vote.

It wasn't like he skipped into the voting booth himself.

"It wasn't a perfect situation to chose from, but a decision had to be made," he said. "It would have been very immature or irresponsible to not vote at all."

Vote because after you saw that video, you wanted to punch Thompson in the face.

Vote because you're grown and this is what grown folks do.

Gather up all your angry emotions and exhaustion, carry it into the voting booth and mash the hell out of some touch screen buttons.

Wendi C. Thomas is a 2016 Harvard Nieman fellow, a writing fellow for the Center for Community Change and a freelance journalist. In April 2017, she launches MLK50, an online storytelling project about economic inequality in Memphis. She hopes Dr. King would be proud.