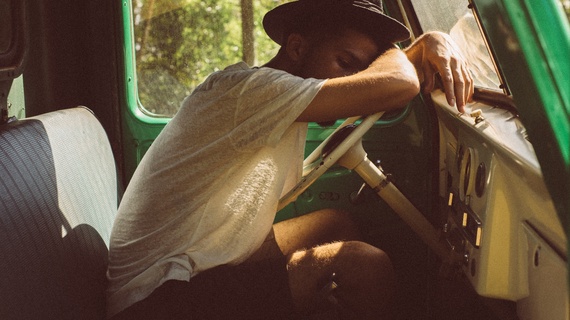 I've dedicated a good share of my life studying men. I've worked alongside them in boardrooms, cheered beside them at sporting events, empathized with them in a therapy room, assessed their health with them, read Mars and Venus about them, and when I was a little girl, I fought them for the remote control to the television. Oh, and of course, I've dated men.

All this studying wasn't about analyzing them, but rather trying to understand them and the world they live in. In turn, it secretly helped me discover my needs as a woman and how to communicate with them in a way to get my needs met. And sometimes, how to identify when I needed to leave because I realized my needs wouldn't be met.

You see, men my father's age were taught to contain their emotions. In fact, other than excitement during a sporting game, rage was the only acceptable emotion to show, and even then they were told to manage it. Showing vulnerability or fear was not an option. Talking about it was not even in their awareness. This is often the reason they close up or shut down or disappear when feeling overwhelmed by emotion. Opening up to tend to their feelings was not modeled from their friends or male family members.

Many men of my own generation are confused about what society, and especially women, want from them today. Their primary roles from the 50s and 60s to provide and protect has been confused since the beginning of the feminist movement and we're in the riptide of its aftermath. The feminist movement in the modern worlds has allowed women of my generation and younger to be able to provide for ourselves, and as such, access resources to protect ourselves too. This left men behind, often questioning what it means to be a man today and their own purpose. Women, after all, are running countries, companies and reproducing solo through medical technology. So what's to become of the men?

Throughout my experiences, in corporate culture, in start-ups, healthcare, as a sister, daughter and as a lover, I know without a doubt boys need a healthy male figure to teach them how to be men. They need a model for what it means and looks like. Not just to learn how to crunch numbers, play baseball or fish. They need men to model character, courage, strength, accountability, self-respect and most especially respect for women. And now more than ever, men need men to show vulnerability and to teach where its safe to show vulnerability. Without this, a man today will both suffer in health and in relations with a self sufficient, modern woman.

Little girls need a healthy male figure too. We need them to teach us how we should be treated by men. We need a healthy male figure to stand-up for us, guide us, make us feel safe, seen, validate our feelings and to make us feel understood. Yes, moms play an important role in this too, for both genders, but not in the same way the men in our lives do. Women need men to show us our value early on so we can hold it as we face life on our own in a male-dominated world.

When a girl or a boy does not have a strong attachment to a moral, hard -working, self-respecting, compassionate, secure, strong, happy and emotionally-available male model in his or her life, they suffer. We grow up to become men and women trying to get our needs met. And it can go horribly awry. We can get lost, morally and spiritually, even if our bank accounts and marriages aren't falling apart. And autopilot and good enough don't count as a happy marriage by my standards.

Yes, society needs our men to be whole, healthy and happy. Without men, we leave a big, gaping hole on earth. All the technology in the world can't replace one secure, emotionally-intelligent man.

This month is #Movember, and mustaches are unifying men around the globe to drive awareness to take their overall health more seriously. But as evidenced by research results released this month by the #Movember Foundation, men need more help. Their research found a whopping 51% of men said they had two or fewer friends outside of their homes. The same study suggests married men rely more on their wives for emotional support with their friend-count decreasing post-nuptials. While most men generally tend to be less social than their female counterparts, a lack of connection to another healthy male to share in their own vulnerabilities can lead to loneliness, depression and worse, suicide. Men need men who understand their personal struggle and who can share and model success through it all.

I witnessed this first-hand as a little girl. I watched as my older brother struggled to find his way without a healthy male role model to guide him. He acted out and befriended other fatherless boys searching for their self-esteem in anyway or any club that would have them. My brother eventually lost his way entirely and ended his own life at a mere 17 years old. He did not see a way out of his struggles.

Men today need our help to empower them social-emotionally, as evidenced by the number of divorces, single-parent mothers, women outpacing men in education, home-buying and a very slow, but increased number of women taking over boardrooms globally. We need men to get clear on their roles and to communicate their needs so both genders feel understood, purposeful and seen, from the boardroom to the bedroom.

We are in a global man-crisis, and I am on a mission to help men mobilize across continents to rise-up, unite and empower each other to embrace their emotions to develop better relations in organizations, in families and in societies. Starting this month, my Man-UPrising initiative launches here! Beginning in December, I will feature a monthly interview with all kinds of men on all things unspeakable, undeniable, and unimaginable in hopes of helping men come-together to speak their truths, encourage fellowship and help other men rise-up. In turn, my hope is for women to better understand the men in their lives and to forge a stronger connection between the sexes.

I'm specifically calling my initiative Man-UPrising to take back the damage we cause when we tell men to Man-Up. It's nomenclature that though it feels normal for many men and may even move men to action, it's damaging at the core. It's derogatory to both genders. It implies men aren't masculine enough, and the only alternative to being manly is weak. This leaves men further masking their vulnerability and perpetuates the gender-struggle that women are subordinate to men. This initiative is meant to empower both genders and to unify and promote equality.

Check in each month and see who I'm getting deep with. I will pose three questions at the end of each Man-UPrising article that you can use to spark an engaging conversation with the main man in your life - whether it be your husband, your father, your son, your brother or your lover - in hopes of building a more intimate connection. And don't forget to share the article with your girlfriends, moms and sisters. We all need to do our share.