The first time I approached the Grand Canyon I walked to the rim expecting to look down, and instead looked over and out at a vast landscape of undulating canyons in primal colors, rising up into fantastic shapes and plunging down to the Colorado River. It was not what I expected at all, but so much more. It was the effect it created in me, as if my sight expanded, my feelings engorged, my soul exulted in the wondrous panorama spread out before me. I felt infinitesimal, smaller than I had ever felt, and yet totally connected to everything around me. 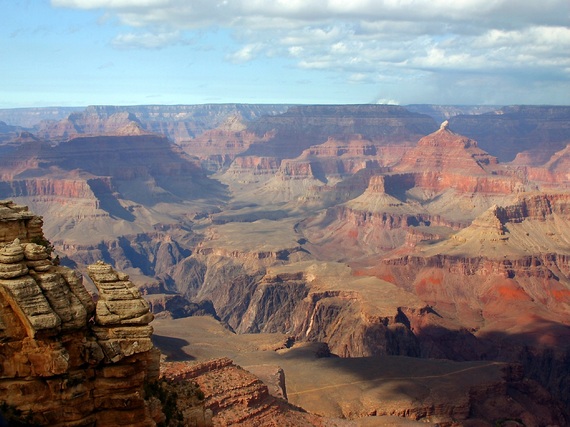 A sliver of the Grand Canyon, America's Natural Wonder of the World.

I completely understood President Teddy Roosevelt's awe when he saw it for the first time. By 1908 he declared 800,000 acres of this magical area a national monument, saying,

"Let this great wonder of nature remain as it now is. You cannot improve on it. But what you can do is keep it for your children, your children's children, and all who come after you, as the one great sight which every American should see."

President Woodrow Wilson made Grand Canyon into a National Park in 1919, and today it is a million and a quarter acres of mostly wild, untamed land. With development restricted to a few areas, it is one of my favorite national parks to spend time in a luxury hotel overlooking the canyon, take a sightseeing tour by bus or on foot, venture down below the rim for a short hike, and eat and drink in a fine restaurant overlooking the splendid sights. Inevitably I return home recharged, grateful for the privilege of being an American and eager to do my part to help our great country.

Members of the Diverse Environmental Leaders Speakers Bureau and guests posed in our finery on the rim of the Grand Canyon, having just stepped out from a reception thrown for us by the park's concessioner, Xanterra.

The Grand Canyon is known as one of the "Crown Jewels" in our expansive National Park System, which includes almost 60 other large scale pleasuring grounds (people are often shocked when I mention that at 2.5 million acres Yellowstone is 11 times the size of New York City) and 350 other kinds of parks including historic sites, monuments and battlefields.

The entire wondrous collection is managed by the National Park Service, the agency created by an Act of Congress August 25, 1916 to "preserve unimpaired the natural and cultural resources and values ... for the enjoyment, education, and inspiration of this and future generations." The agency turns 100 this year in a society that is vastly different from its inception and has managed to do an exceptional job of taking care of our treasures. One of the great pleasures of visiting the Grand Canyon or any of the other 14 national parks from the Atlantic to the Pacific that my husband Frank and I first visited in 1995 is that we can expect them to be almost exactly the same - the same uncluttered, uplifting views inspiring the same feelings of awe and amazement.

But approaching this grand Centennial Anniversary, the Park Service is challenged to maintain our treasures, with a backlog approaching $12 billion in their budget. As a government agency their funding comes directly from our tax dollars through the Congressional appropriations process, buttressed by contributions from philanthropic entities and corporations. A very specific prohibition has been that our parks should never become commercialized, mimicking the advertising-heavy world we experience in urban America. The parks are the places we return to get away from the barrage of commercials, to reconnect with our more elemental selves, to be reminded that we are part of a great wonderful, natural whole.

So when I learned this week that, to deal with this budget crisis the Director of the Service proposes changes including authorizing "the temporary naming of rooms and interior spaces in NPS facilities...to recognize donations for the renovation of an existing facility or construction of a new facility," it became crystal clear to me that we need a national conversation about the future of our national parks. If they are indeed our "Crown Jewels," our inheritance from the past and our legacy to the future, then we should collectively agree how we are going to fund them, how we are going to make sure that all Americans know the benefits of these assets. To change the essential character of our world class treasures in a desperate gambit to raise money would truly be "selling our birthright for a mess of pottage."

Thankfully, corporate and philanthropic interests have supported our parks for years without requiring their names to be plastered over the parks. Just yesterday, American Express and the National Trust for Historic Preservation announced an expanded version of their Partners in Preservation program, which has contributed more than $16 million to preserve historic structures in national parks and elsewhere across the US since 2006. In recognition of the Centennial, the program has been ramped up to award $2 million in grants this year, and the public gets to help choose which of 20 units will get priority. Even before the competition went live yesterday, the program provided grants and strategic assistance including social media readiness to all 20 units so that they could start on equal footing. Having visited 15 of the 20, I'm glad I can vote for my favorites every day until July 5. I checked and made sure that American Express has not required any naming rights or recognition for this program. 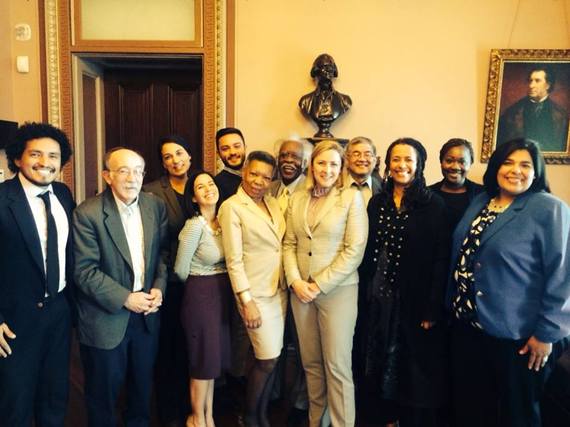 Representatives of the Centennial Initiative Coalition pose with WH Council on Environmental Quality Manager Christy Goldfuss (c) after an informative meeting May 16.

Earlier this month I also learned that the Park Service anticipates almost 25 percent of its 20,000-plus workforce will retire at the end of this year. Who will fill the vacuum thus created and how will our parks be affected? One of the obvious things that remains the same in the parks is the demographics of the workforce, which has not changed to reflect the changing face of America. These potential openings are an opportunity to address that.

The Centennial Initiative Coalition has asked President Obama to issue a Presidential Memorandum around the centennial calling for a new vision for our national parks, forests and other publicly owned lands and waters for the next 100 years. But the plethora of developments around the national parks right now illustrate a stark need for a national conversation that helps publicize these places and helps us come to agreement about how we will fund, maintain and protect their essential character into perpetuity, and why it is vital to do so. 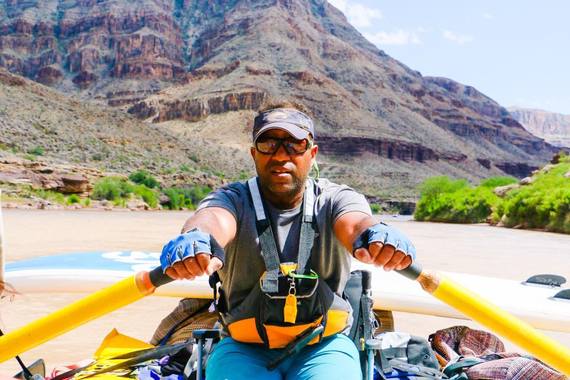 Adventurer, film maker, author and member of both DEL and the Coalition James Mills is ecstatic about his trip down the Colorado River in Grand Canyon this month.

"We have fallen heirs to the most glorious heritage a people ever received, and each one must do his part if we wish to show that the nation is worthy of its good fortune," said President Roosevelt.

It's time to show ourselves worthy.