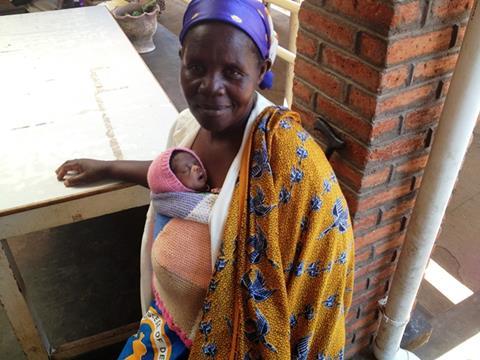 In the corridor of a Malawian rural hospital, Baby Banda nestles between his mother's breasts, swaddled warmly and breathing easy. This is a near miracle; the baby weighs only 1,200 grams -- that's just over 2.5 pounds -- and was born nine weeks early. In Malawi, like many countries in the region, if you are born this early, your chances of survival are very low. But for babies like Baby Banda, there is hope: simple, affordable, effective interventions like swaddling, breastfeeding, clean care, hand pumping a few breaths at birth and a few cheap drugs can cut deaths dramatically -- especially in premature infants.

One of these drugs is a steroid -- dexamethasone. When given to a mother who goes into labor too soon, dexamethasone can accelerate maturation of her baby's lungs in just a few hours, a process that normally takes weeks in the womb. Its magical effects that help premature newborns to breathe have been known for decades, and it's now used routinely in high-income countries. But in Malawi and surrounding countries, the drug is given to almost none of the babies who need it. In a country that has not one baby ventilator, this drug can make a difference between life and death; up to half of these early-born babies can be saved from suffocation. Baby Banda's mother felt labor pains weeks before her due date and was lucky to arrive quickly at one of a handful of hospitals that were trying out the drug -- which costs less than a dollar for the course of four shots -- to prevent breathing problems in babies born too soon.

This is not hard. To make sure that the drug is given to the right mother, a simple system needs to be in place so that three tasks are accomplished: 1) the nurse needs to work out how far along the pregnancy is of every mother who arrives at the hospital with signs of labor; 2) the drug needs to be close at hand; and 3) the nurse needs to actually give the drug. In a test to prove that it could be done, four hospitals in Malawi recently showed that over 90 percent of mothers in early labor could get steroid injections in time to benefit their babies. All it took was a minor redesign of the set-up in the labor ward, and some teamwork between the pharmacy, nurses, and data collectors. It also took the hospital leaders to say publicly to the staff that the time for letting early-born babies die was over, and that saving early-born babies with this simple intervention was going to be the norm. It took hospitals only a few weeks to change from giving no mothers the drug to giving nearly all mothers the drug.

Energized by these findings, the Ministry of Health is set to scale up this simple intervention across the country. There is only one thing that could stop this plan: Malawi has run out the drug -- completely. Because the steroid drug was not being used in past years, it was not put on the list of requested drugs to be shipped into the country this year. And it seems that the four hospitals that so successfully gave mothers the steroid drug over a few weeks used up the entire country's supply of the drug. Through the "usual" procurement channels, it's going to take many months to ship a year's worth -- 300,000 doses -- of the drug into the country.

The tragedy is that while Malawi has shown that nurses can reliably deliver this simple lifesaving drug to mothers who need it, the country cannot deliver the drug to the nurses who need to dispense it. This needless shortage is played out day by day in nearly every country in the region. There is no lack of money to procure the drugs. It's the systems to predict, order, import, distribute, and deliver the drugs to patients that are broken (or were never there in the first place). Across the globe, much effort is being directed to fixing this problem. But the 2,000 Baby Bandas who are "born too soon" over the coming year may not survive unless an immediate solution is found so the Malawian government scale up this simple life-saving drug in hospitals across the country.