Remember Neel Kashkari? Back during the financial crisis, Kashkari sat at the U.S. Treasury's Office of Financial Stability, where he was in charge of implementing the Troubled Asset Relief Program -- the fancy name for a wheelbarrow full of $700 billion in taxpayer money that went to revive the do-not-resuscitate banks of the world, which is exactly what those banks asked the government to do. Well, the whole experience made Kashkari terribly, terribly sad! So he went out into the woods to build himself a Cabin Of Emotions, where he could grieve over the fact that Washington, DC had lost the lustrous glamour that attracted him in the first place -- during the Iran-Contra hearings.

But since then, he was rescued from his doldrums by bond giant PIMCO, where he became its managing director of investment management. Now he's on the op-ed pages of the Washington Post, with a message for the olds: STOP BEING SO "ME-FIRST" and let us cut your entitlements!

A nation's culture can have a profound impact on its competitiveness. Our shared beliefs in free markets, fair play and the rule of law inspire entrepreneurs to pursue their dreams and give global investors confidence to bring their money to America. These beliefs have passed from citizen to citizen, from generation to generation. They have strengthened over our history and brought an important competitive edge to the United States.

Hey, let's remember some basic things before we go any further, shall we? "Free markets" equals "too big to fail banks will never be allowed to fail." "Fair play" equals "bailing out these too big to fail banks when they nearly destroy the economy while small banks die by the hundreds." "Rule of law" equals "big banks using derivatives to get around capital rules." Okay? Moving on!

Our belief in free markets is founded on the idea that each individual acting in his or her self-interest will lead to a superior outcome for the whole. The financial crisis has reminded us that free markets are not perfect -- but they do allocate capital better than any other system we know. A "me first" mentality usually makes markets more efficient.

Okay! So, a person who retires today probably entered the workforce in the mid to late 1960s. They acted in their self-interest, let's say, and this led to some "superior outcomes for the whole." It was so "me-first" of those people to not consider the possibility that decades after they started contributing to the nation's wealth, that another generation of idiots would come around and destroy it, leaving us with no other choice than to push those aging former societal contributors out onto ice floes to die! What jerks! Where was their foresight? Why weren't they smart enough to get way into toxic mortgage-backed securities? They could be the ones holding America hostage today!

Cutting entitlement spending requires us to think beyond what is in our own immediate self-interest. But it also runs against our sense of fairness: We have, after all, paid for entitlements for earlier generations. Is it now fair to cut my benefits? No, it isn't. But if we don't focus on our collective good, all of us will suffer.

Well, Neel Kashkari isn't going to suffer, because he works for PIMCO, remember? And PIMCO's brilliance was the way it strictly adhered to a "me-first" philosophy:

As of June 30th, 61 percent of PIMCO's holdings -- $500 billion -- were in the very mortgage backed securities that it's now being hired by the Fed to buy back on behalf of US taxpayers, according to a September Bloomberg report that cited data on PIMCO's own website.

That could explain why, as financial blogger Rolfe Winkler pointed out earlier today, PIMCO chief Bill Gross was sounding the alarm in early September about the disastrous fate that would befall the US economy unless the government started buying up troubled mortgage assets.

If we are to prevent a continuing asset and debt liquidation of near historic proportions, we will require policies that open up the balance sheet of the U.S. Treasury.

Within days, Treasury did what Gross was asking. In other words, as Peter Cohan, a professor of management at Babson College, put it at the time in a post on Bloggingstocks.com:

Bill Gross, who manages $830 billion, has convinced the U.S. Treasury to use your taxpayer dollars to bail him out of his bad investments.

And Gross seems to have had his eye on the endgame for a while here too. Later that month, he argued in a
Washington Post
op-ed that a broader bailout -- what became TARP -- was also desperately needed, and he seemed to suggest that his own PIMCO would be a perfect candidate to manage the funds.

And now, Neel Kashkari is in the Washington Post today, arguing that cutting entitlements is akin to TARP because both are "unpopular decisions that are in our collective best interest." Except that TARP benefitted PIMCO greatly and, having been done a good turn, PIMCO rescued Kashkari from his sad little cabin in the woods. Some pigs are more collectively best-interested than others.

But Kashkari says we have to act now now now! Cut entitlements before it's too late!

If we wait until the bond market shuns Treasurys, the economic consequences could be dire. Virtually overnight, we could have far less money to spend on priorities such as defense, education and research. Once confidence in U.S. Treasury bonds is lost, it could take years to return.

Let's take a look at the bond market, shall we? 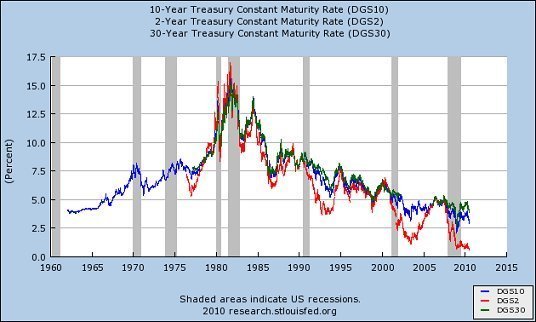 That red line indicates the interest rate yield on 2-year T-Bills, currently at about 0.6%. Now, there are plenty of market experts who will be willing to debate the fine points of this, but doesn't it seem like the world's investors a) find 2-year T-Bills to be one of the safest investments around and b) are really unconcerned about the U.S. deficit? When, exactly, is the confidence going to be lost? Will it be soon?

Fun fact: Right now, the 2-year T-Bill is seen as so safe that, judging by the yields, it's apparently riskier to get a 2-year CD from a bank. The average yield on a 2-year CD is about DOUBLE that of a 2-year T-bill, according to Bankrate.com. So investors are passing up double the yield in order to buy Treasuries.

Kashkari says, "Our leaders need to make the case for cutting entitlement spending by tapping into our shared beliefs of sacrifice and self-reliance." That word -- "our" -- seems awfully ironic! Pare back now, America, so there's money on hand to save the banks again! Shacks in the woods for everyone else.