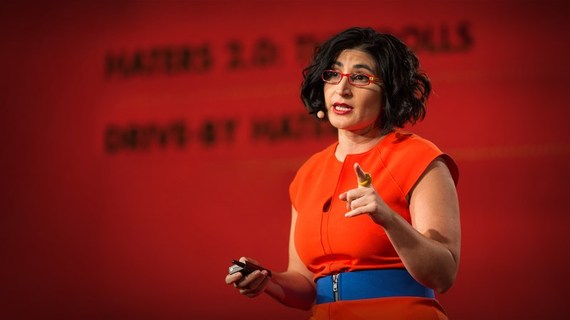 With the goal of harnessing the untapped potential of Iranian-Americans, and to build the capacity of the Iranian diaspora in effecting positive change in the U.S. and around the world, the West Asia Council has launched a series of interviews that explore the personal and professional backgrounds of prominent Iranian-Americans who have made seminal contributions to their fields of endeavor. We examine lives and journeys that have led to significant achievements in the worlds of science, technology, finance, medicine, law, the arts and numerous other endeavors. Our latest interviewee is Negin Farsad.

Negin Farsad is an acclaimed writer, director, and star of the hit documentary "The Muslims are Coming!" starring Jon Stewart, David Cross and Lewis Black and Nerdcore Rising, starring Weird Al Yankovic (both available wherever movies are streamed/downloaded). She was named one of the Funniest Women of 2015 by The Huffington Post, and named one of the 10 Best Feminist Comedians by Paper Magazine. She has been selected as a TED Fellow for her work in social justice comedy, and is the author of the recently released, How to Make White People Laugh, (Grand Central Publishing, 2016). She is also the director/writer/star of the recently released 3RD Street Blackout, starring Janeane Garofalo, Ed Weeks, and John Hodgman. She is host of the Earwolf podcast, Fake the Nation. She started her comedy career as a Cornell and Columbia-educated policy advisor for the City of New York.

Tell our readers where you grew up and walk us through your background; how did your family and surroundings influence you in your formative years?

You identify yourself as a social justice comedian and you believe we can change the world through jokes. Can you enumerate the most significant social justice issues the United States is facing?

Social fragmentation is a main issue. The writer and Harvard academic Robert Putnam talks about this in his book, Bowling Alone. Many of our institutions that have given us civic engagement and imbued us with social capital or networks -- such as the 4H Club or the ELT Club - and so on - have decayed and withered, and with the onset of the internet that's only gotten worse. People have retreated into their own silos, and that has led to the development of fringe ideologies that, in some instances, are steeped in hate. And I think that is a key reason why we have a candidate like Donald Trump. Social fragmentation leads to the popularization of the fringe ideologies that are steeped in bigotry, and that is a major threat that we face.

Another main challenge facing us is climate change. I feel like people don't really understand the magnitude of it. It may seem to many that the people who are suffering from climate change are living on a small, distant island and we don't make the connection between a hurricane or drought or wildfires and climate change as a whole. It requires much discussion, and we've done very little of that. The other major thing facing us in the United States is gun violence. What are we doing about these challenges?

I think something like 53 toddlers so far this year have accidentally killed someone because they had access to a gun. Obviously, toddlers don't wish to kill people, but there's just too much access to guns. And that's definitely something that I want to work on as well.

How can we actually combat racism, stereotyping, and exclusion?

I think a big way of combating racism, stereotyping and exclusion is to meet your neighbors. Again, this goes back to the importance of fighting against social fragmentation. We need to meet people from across the tracks, from across town, and from across socioeconomic levels, and that, I think, will help us bridge these gaps, because it's much harder to hate people you know. And it's much harder to believe in stereotypes of people if you know them personally.

Can you share some highlights of your book, How to Make White People Laugh?

There's a chapter called 'Do Immigrants Spit out More Patriotic Babies?' I think they do, and that's something that anyone with xenophobic tendencies may wish to think about, especially by reading the story of me and my friends at summer camp. One of my friends is Indo-American and another is Romanian-American. The three of us pitched in to stitch together an impromptu and highly imperfect Stars and Stripes for our common area since we all had American flags in our respective bedrooms and wanted to have at this camp. You don't necessarily think of a story like that when you think of immigrants or first-generation kids, but that's precisely the kind of story we should think of, because it's so indicative of the immigrant and first-generation populations than we have. And we don't often think about the positive ways in which immigrants incorporate themselves into American society, and encourage their kids to do the same.

You have worked on debunking many misconceptions about Muslims and Islam. Can you share some of them with us?

When I travel the country, I get many questions on this. I've traveled in so many parts of the country, from the deep South, to the Midwest, to the West, and one of the questions I get all the time is: why don't Muslims denounce terrorism? And I think that's a really big misconception. Muslims in fact do denounce terrorism. I just think they don't get enough media coverage over it because the media doesn't want to cover a bunch of reasonable people denouncing terrorism, since it's not a headline grabber.

So, in order to do my part in denouncing terrorism, I decided to launch a website called "The Daily Denouncer," which denounces terrorism every day of the week, but takes the weekends off. And if you go to that website, you'll see single panel cartoons that show funny images of daily chores and activities. For example, you'll see a Muslim woman who goes to a printer at her office and finds the paper tray empty and says, "I denounce terrorism, I also denounce people who never fill the paper tray!" And that is office humor, as the website is trying to show that Muslims denounce terrorism and it's also ridiculous that we have to constantly denounce terrorism.

I think another misconception about Islam is the notion that there are no secular Muslims. We don't really consider Muslims to be secular, and consider them all to be hardcore and practicing members of their faith. To be sure, there are hardcore and strictly practicing Muslims, but there are also middle-core practicing Muslims, and softcore practicing Muslims, and just totally secular Muslims. I think I'm one of those who grew up with some Muslim traditions and culture, and who is not practicing. But like Jews who haven't been to temple all year long who will call themselves Jews, or Christians who may go to church once a year to appease their mothers and still call themselves Christians...I think Muslims come in similarly diverse shapes, and that's another misconception I try and clear up.

How can Muslim-Americans become more accurately portrayed in the mainstream media in the majority's imagination?

Whenever there's a terrorist event and there's a Muslim behind it, we're constantly out there having to say "we're Muslim but we're not that kind of Muslim, and that true Islam doesn't promote violence, and that those people aren't real Muslims." And we constantly have to go out there and say "don't let these actions of these terrorists define us." And yet, when a white supremacist kills nine people in Charleston at a black church, no one is calling on white people to defend all white people because we see that as an isolated event. It would be ridiculous if that white supremacist were to represent all white people. We know that he doesn't. There is definitely a double standard at work here.

You wrote a piece in the Guardian on Iran's suspicions towards the U.S. What motivated this?

I think it's funny because every time we create an argument on the international stage of why we should be suspicious of a country, we really have to look at ourselves too and see what it is that we've done. In the case of Iran -- and I said this during the nuclear treaty negotiations-- while we have to be suspicious of the country's motives, we also have to be concerned about U.S. policies and actions.

The United States engineered a coup in Iran in 1953 and ended up removing Mohammad Mossadeq, who was a popular prime minister who had nationalized the country's oil. Who knows what he could've done for Iran and for the Iranian people had we not removed him?

We've also launched unwarranted wars and violated UN charters. Consider the Iraq war, which did not have much international support, nor tremendous domestic support, and yet we waged that war. I think we have a highly polarized polity now and we are not getting very much done. You should really look at our record in Congress, because we have a very, very low-functioning Congress! These are all things where the United States could do better and reasons why other countries might question our political system. And so I think whenever we look at geopolitical challenges, we should also take a quick look at ourselves.

What does it mean to be Iranian-American to you?

No one's really ever asked me this question. I am truly grateful for having been exposed to this whole universe of Iranian poems, history, music, food, mythology, proverbs, and languages, and all of these wonderful, wonderful things that make up a culture. And I have had access to that. And then to be American on top of that means I have access to this amazing, democratic, multicultural, multilingual experience that is the United States...that is the envy of the world, the birthplace of jazz and hip hop! And the perfecter of hamburgers and apple pie and technology and space, and all of these things that America has given us. And I feel so lucky to have unfettered access to that. And to be Iranian-American just means that I have these special powers of accessing both these amazing cultures and...and I have my parents to thank for that!