It could be a scene right out of The Big Bang Theory, Friends, or, really, any sitcom where a lot of the takes occur in an apartment complex or housing community: neighbor conflict. Even the likable Dunphys in Modern Family struggle with how to tell their new Los Angeles, CA -- area neighbors that they're loud -- and that the huge boat in their driveway is a total eyesore. 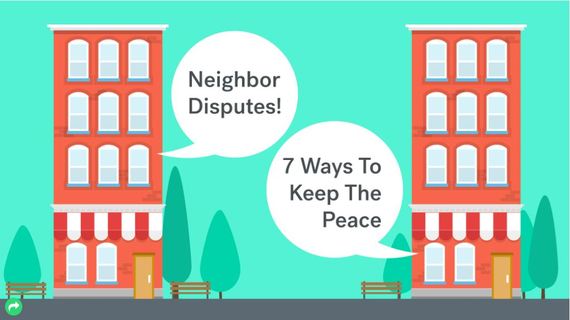 Luckily, making peace with your neighbors doesn't have to be that hard. In fact, resolving issues with your neighbors -- whether it's their always-barking dog or those upstairs, all-night, stompy dance parties -- can be easy and drama-free. Heed these tips from etiquette expert Elaine Swann, author of Let Crazy Be Crazy, to make the neighbor problems disappear without any snafus.

1. Don't react in the moment
You get home from a long day at work and -- surprise! -- your neighbor has parked their motorcycle in your parking spot. Again. We know it's hard, but resist the urge to confront them then and there. "Put some time and space between the incident," advises Swann. "When we react, especially in the heat of the moment, we have a tendency to do the wrong thing and possibly even say the wrong thing too." Take a few hours to cool off, regroup, and then move to the next step.

2. Give yourself time to seek a resolution
Before you confront your neighbor, take the time to figure out exactly what you want the resolution to be. Do you want the party noise to stop by midnight? What's the specific outcome you're looking for? "Your goal should not be to simply tell the person how he's upset you but to also express what you want to happen to make it stop," explains Swann. "It's about how you can work together to solve the problem."

3. Don't get other neighbors involved
It's hard not to fall prey to gossip -- especially when it comes to neighbors -- but avoid complaining about the situation with your other friends in the 'hood. "When we get others involved and get their opinions about the situation, they can get us really heated and fuel the fire," says Swann. "Keep others out of it so you can think more clearly."

4. Write a "neighbor note"
While renting an apartment in North Bergen, NJ, Linda Kuriloff and her roommates struggled with loud neighbors across the hall. The neighbors' vicious fights -- which often caused the neighbors' dog to bark and child to cry loudly -- were not only interrupting Kurlioff and her roommates' evenings but also upsetting them. The group opted to write a neighbor note. "We decided we would write a letter saying that we appreciated their friendliness and looked forward to continuing in that vein, but our concern for the child we heard crying would compel us to have to call the police each and every time we heard violence from within their apartment," says Kuriloff. "We let them know [the letter] was from the girls across the hall." It worked! "The letter was effective for reducing the length of the fights," says Kuriloff. "They often quieted down after a few minutes of shouting, but we had to call the cops a time or two."

"Leaving a note is a great idea," says Swann. "You have the opportunity to edit the note and double-check [your words] to make sure what you're saying is relevant. Plus, rather than catching the person off guard by confronting him or her in person, a note allows you to get your point across without it turning into an argument. And they can take in that information at a time that's appropriate for them."

Writing an anonymous neighbor note can sometimes be a better option, although Swann recommends signing it so the neighbor can discuss the issue with you. "For certain conflicts that irritate several neighbors, such as a neighbor leaving their trash cans out for days on end, an anonymous note is a good option," explains Swann. "But if it's a conflict specific to you and directly affects only you, you want to leave your name so that you two can set aside a time to discuss the issue and come up with a resolution."

5. Talk it out
Leaving a note is a great first step, but don't let it be your last. Your goal with leaving a note that's not anonymous is to resolve the issue peacefully -- together. "If you leave a note or message them, ask them if they have time to chat about the issue. That way, you set aside a time to talk," says Swann.

Sometimes it's as simple as making a request (nicely). Bill Seavy from Cambria, CA opted to skip the note in favor of talking it out. "The neighbor was a college student I'd met who let his dog poop a lot in the yard right next to where we were barbecuing," he says. "Interestingly, there was a debate about how to handle it with my neighbors. I just settled it by going over and asking him nicely to scoop up, and he obliged."

6. Don't pile things on
Leave the complaints to a maximum of three, advises Swann, and address them in order of priority in case the conversation goes in a negative direction. "Who cares if they don't take their trash cans in immediately if what you really want resolved is the fact that their dog is barking all the time and waking up your baby?" she asks.

7. Seek resolution
Once you know what you want to happen, ask for it. "A few years ago, I was renting an apartment duplex and lived on the second floor," says Elaina Lin, a renter from Wilmington, DE. "My downstairs neighbor living on the first floor was a graduate student and would have house parties every now and then. As a full-time professional, I found the noise level to be quite irritating. One day when I saw her, I said, 'So, it seems you have been hosting a lot of parties lately.' She didn't respond much but had a look of surprise on her face. I continued, 'I just wanted to let you know that the noise level has been over what I've been able to tolerate for the past few weeks. I have already contacted our landlord, but I would prefer it if you are more mindful.'

"She seemed reluctant to take my advice, so I added, 'If not, I will again speak to our landlord to add an additional clause or addendum to the lease agreement regarding noise level and making an environment livable for nearby neighbors.' After much back and forth, she finally agreed to respect my wishes. I left the conversation optimistic. A few weeks later, I started noticing a difference and that there didn't seem to be much party action going on downstairs anymore."

Have you left neighbor notes or worked through a dispute with a neighbor? Share your tips and experiences in the comments!