Somewhere in this raunchy, bawdy comedy of errors is a young feminist story trying to get out. By the time this follow-up to Neighbors worms through 92 minutes of belly laughs and sight gags, the die is cast. Young women should follow their own path and thirtysomething-year-old parents should stay in their own lane. Message heard loud and clear. 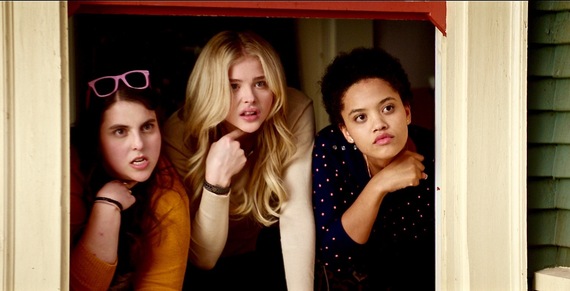 In Neighbors, Teddy (Zac Efron) and his Delta Psi fraternity brothers Pete (Dave Franco, 21 Jump Street), Scoonie (Christopher Mintz-Plasse, This Is the End) and Garf (Jerrod Carmichael, The Carmichael Show) were in a pitch battle with the couple next door, Mac (Seth Rogen) and Kelly Radner (Rose Byrne). The two factions fought like cats and dogs. Proving time heals all wounds most of the frat guys have matured and gone on with their lives. Teddy is the exception. Working a sales job at Abercrombie & Fitch alongside teenagers doesn't count as a substantial career move.

After learning that any sorority they join is not allowed to throw parties, and faced with the fact that frat parties objectify women, three young coeds seek a sorority of their own. Shelby (Chloë Grace Moretz, The Equalizer), Beth (Kiersey Clemons, Dope) and Nora (Beanie Feldstein, Fan Girl) create Kappa Nu, a safe haven for young women who have high self-esteem and a strong yearning for marijuana. They're house hunting but can't afford rent as they set up their fledgling sisterhood.

Turns out Teddy is looking for a place to live too and he helps them move into his old frat house. Pity. Mac and Kelly, who still live next door, are trying to move to the 'burbs to raise their daughter and the kid who is on the way. They've just about sold their house, except for a sketchy 30-day escrow period when the buyers can back out, for any reason. For one month they need the kids next door to turn down the volume on their raucous parties. Fat chance the couple will get the cooperation they need. Fight! Millennials against old farts.

That's the set-up. What follows is a predictable, still very funny and thoroughly mischievous series of pranks, counter pranks and outlandish humor. The quintet of screenwriters includes: Andrew Jay Cohen and Brendan O'Brien (Neighbors) along with director Nicholas Stoller, Evan Goldberg and Seth Rogen. What's odd is that there is not one single female scribe in the bunch, yet the men get the women's point of view so correct. What was their secret weapon? Did Gloria Steinem, Taylor Swift or Beyoncé sit the guys down and give them a lesson in modern feminism? Whatever magic was used, it worked.

The script also is very good at setting up the Mac and Kelly characters as neurotic, loving and hip young parents. They're so cool and unassuming that in the first scene, when they're having sex and she throws up on him, you are all onboard. Never has vomit and fornication been so charming. Also noteworthy is that the line between the frat brothers heterosexuality metrosexuality, bisexuality and homosexuality is so blurred you need a GPS to figure out which direction each guy is going. It's so post marriage equality, it's next phase.

Director Stoller, a holdover from the first chapter, doesn't add any new tricks to this sequel. He gets funny performances out of the cast, who say the most outlandish things: Kiersey Clemons delivers a line about eating a man's biscuits (those aren't the words she uses, the explicit details shall remain secret) with a shocking nonchalance. You howl with laughter. But save your energy, there is more where that came from and Stoller knows how to get his cast to deliver the goods.

Rogen and Byrne are sweet and put upon as the husband and wife. Zac Efron as the dumb hunk, who is as thick as a board, is very self-effacing, disarming and so stupid he invites empathy. Lisa Kudrow makes a cameo as a no-nonsense college dean who won't help the couple sabotage the sorority. In a flash performance she may be the drollest of them all. Franco, Mintz-Plasse and Carmichael are very silly as the boys. Moretz, Clemons and Feldstein have firmly placed themselves in the hall of fame of young comic actresses who are not afraid to say anything to get a laugh.

Production elements all around are decent: Cinematographer Brandon Trost, production designer Theresa Guleserian, costume designer Leesa Evans (Trainwreck) and composer Michael Andrews (Bridesmaids) are up to the challenge of supporting pure foolishness. The one who stands above the rest is editor Zene Baker, who gives the film a quick pace and consistent rhythm.

This comedy with a conscience is not as ridiculously funny as Old School. But in its own way, it is as much fun. And for young women, viewing it should be a rite-of-passage as they prepare themselves for the real world where a feminist mojo and knowing how to roll a joint may come in handy.