Hawaii Gov. Neil Abercrombie seems to understand why people go bonkers for Google Glass. He put on a pair at a news conference (in which Mayor Kirk Caldwell announced his endorsement of Abercrombie’s reelection campaign) and got excited.

“I just Googled you!” he said to Caldwell.

The glasses, which are essentially Google for your face, were loaned to Abercrombie by Hawaii-based Oceanit, a science and engineering firm beta-testing the technology for Google.

Shane Peters, the communications director for Abercrombie's campaign, told HuffPost in an email that Abercrombie only wears them occasionally at select campaign events where he can interact with voters. "It's an opportunity to capture his experiences on the campaign trail. It's basically the P.O.V. of the governor, a novel way to highlight what it's like to be a candidate, and an opportunity for him to embrace emerging tech -- something he has a passion about."

He also wore them for earlier an appearance at what looks like a bon dance when he and some fans took this meta Google selfie.

At the rate he's going, Gov. Abercrombie will be a classic Glasshole in no time -- and we're totally OK with that. 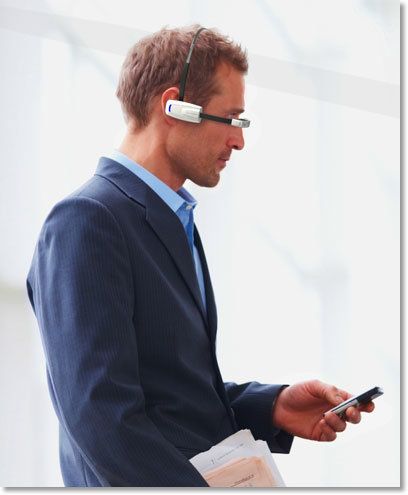 1 / 5
Vuzix M100 Smart Glasses
<a href="http://www.vuzix.com/augmented-reality/products_m100ag.html">This Google Glass competitor</a>, recently tested at the Consumer Electronics Show, can be tethered to Android devices to provide a heads-up display of what's happening on your phone. Given the <a href="http://www.businessinsider.com/augmented-reality-apps-2012-3?op=1">slew of augmented reality apps</a> coming onto the market following the Google Glass announcement, this has the potential to be more than just a glorified smartphone display. <strong>Price</strong>: <a href="http://reviews.cnet.com/specialized-electronics-accessories/vuzix-smart-glasses-m100/4505-7847_7-35536668.html" target="_hplink">Under $500</a> <strong>Available</strong>: <a href="http://www.product-reviews.net/2013/01/07/ces-2013-meet-the-vuzix-m100-smart-glasses/" target="_hplink">Summer 2013</a>
Vuzix