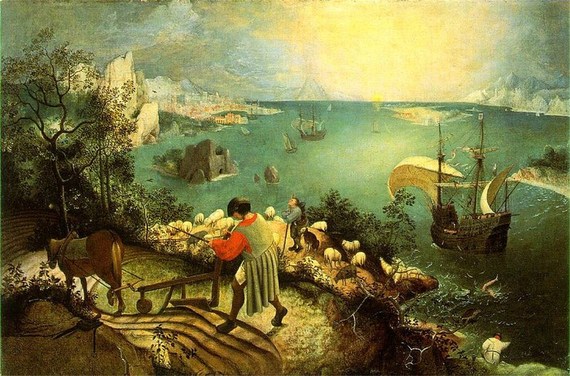 Well, here we go again. With Neil Gorsuch as the current Supreme Court nominee, once more we hear praises of "originalism" as a judicial interpretive philosophy. As Gorsuch puts it, judges should "apply the law as it is, focusing backward, not forward, and looking to text, structure, and history to decide what a reasonable reader at the time of the events in question would have understood the law to be . . . ." Since law generally looks forward to govern future and not past behavior, and since context drives meaning in much more complex ways than Gorsuch's words suggest, I'm amazed that people take this backward-looking and overly-simplistic philosophy seriously. I've written at length about the problems with such an approach but now also wonder if an old painting might more quickly dispatch such error.

What might originalists learn from an old painting? What might they learn from "Landscape with the Fall of Icarus," a work often attributed to Bruegel? Viewed on its face alone, the work is a hodgepodge of images such as those of a man with his horse and plow, of more people, of furrows, of sheep, of a tree, of rocks, of a sailboat, of a leg sticking out of the water, and of a sun diffused by clouds and sea. What is fascinating about all that? How could that odd medley have inspired such great poetry as Auden's "Musée Des Beaux Arts"? The painting must have "spoken" to Auden in profound ways but how do we find the message? (Yes, people speak with images as well as words. Images as signs can convey meaning symbolically like words and can also convey meaning through resemblance with what they represent.)

Do we find the message by looking up dictionary definitions from Bruegel's time of "man," "horse," "plow," "furrows," "sheep," "other people," "tree," "rocks," "sailboat," "leg," "diffuse sun," "clouds," and "sea"? Of course not. That would just leave us with a disconnected list of of multiple possible definitions for each such term. Additionally, the definition lists would vary by dictionaries consulted. If we were interpreting a similar modern painting, for example, the current fourth edition of the American Heritage College Dictionary has no fewer than 15 definitions of "man" as a noun. So many choices across terms facilitates rather than limits interpretive "activism." The conservative interpreter can pick the definitions that fit the conservative interpreter's worldview, ignore conflicting alternative definitions of terms, and yet still claim to follow the "original" sense of the terms defined. The liberal interpreter can do the same and reach a conflicting result that also claim to follow the "original" sense of the terms. It's hard to see how this can be a serious interpretive philosophy. In any case, it encourages rather than discourages interpretive "activism."

That said, to seek the artist's meaning, we must of course consider the images. However, we must also look at all the available evidence of the artist's meaning when we interpret those images. The title tells us the painting is about the fall of Icarus. This points us to a conceptual and literary context that supplements, for example, the plowman focusing on his plowing. Now and only now can we see the likely "literal" subject of the painting: a world focused on its own pursuits while missing the exuberant rise and tragic fall of a boy who briefly flew. Thus, the painting has no "literal" meaning in itself. We have to go out and reconstruct what the painter meant. Nor does the painting in itself simply give us a likely deeper meaning intended by the artist. To find that deeper meaning, we must further contextualize the images. As moral yet ephemeral agents, how should we react to what we know is the ignored tragedy of Icarus? Morally, shouldn't the plowman regret his indifferent behavior? Additionally, having only brief and fragile lives, shouldn't we be horrified, chilled, and humbled by what happened to Icarus? If the world doesn't give a damn about a child who amazingly flew and then streaked down the sky, how can it give a damn about us? Isn't there therefore a deeper message that we should notice the suffering of others, that we should help them to the extent we can (an ability which of course can change as eras progress), and that this is in our own self-interest lest we, too, be left to drown?

What might originalists who purport to focus on "plain" and "original" text learn from all of this? Quite a bit. Words are signs as well. They, too, must therefore be interpreted in all their contexts including their cognitive, physical, temporal, social, cultural, human, discourse, textual, and purpose contexts. Furthermore, like legislators who would govern future behavior, artists paint forward, not backwards. Artists know that those who come next are the ones who view their paintings. Those who came before of course cannot be viewers. If the artist's purpose is to speak to the future including us, why would we freeze the artist's message in the past? Wouldn't we be foolish to say, for example, that the artist's message wouldn't laud such helpful programs as Medicare since the artist couldn't have known of Medicare? Wouldn't that contradict the artist's very moral message? A principle of charity and kindness is not limited to the means of charity and kindness available at the time the principle happens to be uttered. Similarly, if we have a right to free speech, that of course includes email though the founders had no more inkling of email than our artist had of Medicare. We could try to "fix" this by arbitrarily saying that technology is somehow excepted from the originalist freeze but that hardly satisfies an honest and reasonable mind. And the problems go deeper still. If we operate in a freeze, how does the Constitution's Preamble "We the People of the United States" refer to fifty states instead of the original thirteen? Don't we have to somehow re-ratify that exact same language to expand the club? But even if we do so, wouldn't we have the exact same language we had before? Isn't this at the very least odd--especially when originalists purport to focus on words? Maybe the difference now would be that we can update our sets of dictionaries and pick out our favorite definitions from these new books? In the same vein, does Congress have to repass the same legislation daily so that such legislation can fully apply to the present? But again, if so, what changed other than the dictionaries we could now use in our activist judicial philosophy? Does a modern artist have to repaint the exact same image of Icarus falling so the deep message can now laud Medicare? But if the exact same image lauds Medicare, what does the second painting add? Here maybe we switch to encyclopedias which confirm Medicare exists at the time of the second painting? Maybe we can also pick and choose what we like from the encyclopedias to form our conclusions? Ironically, Gorsuch claims to focus on "reasonable readers." However, reasonable people don't think and use language in the odd, arbitrary, and overly-activist ways originalism would require. We need to think long and hard before we give a Supreme Court seat to anyone who thinks or claims otherwise.