For scientist Neil Hammerschlag, it was just another Sunday. He was out cruising the reefs near the Florida Keys, hunting for sharks — not as trophies, but for research aimed at keeping them out of display cases and in the water. In many places, these iconic predators are disappearing.

A research assistant professor at the University of Miami, and the director of its R. J. Dunlap Marine Conservation Program, Hammerschlag spends every other weekend in southern Florida dragging baited, shark-safe lines behind a boat, hoping one of his research subjects will take a bite.

When he and his team catch one, they outfit the shark with either a satellite tag or an ID tag, take tiny samples of muscle and fin and a vial's worth of blood (they check to see if the shark is pregnant), then send the shark on its way. The whole process takes about five minutes.

On Sunday, May 27, they were having plenty of luck. Something snagged the other end of the 75-foot (23-meter) line, and Hammerschlag began to pull it in. Right away, he said, he could tell something was different.

"It's a lot of work to bring up a line, but I can usually do it myself," he says. This time, he needed help.

He and a colleague joined forces. "We didn't know if we were pulling up a sunken boat, a monster shark, a school bus — we had no idea which it was," Hammerschlag told OurAmazingPlanet.

They were in about 150 feet (46 m) of water, and, even as the two men strained to pull in whatever it was, it remained invisible, hidden by the murk of the shallow ocean. 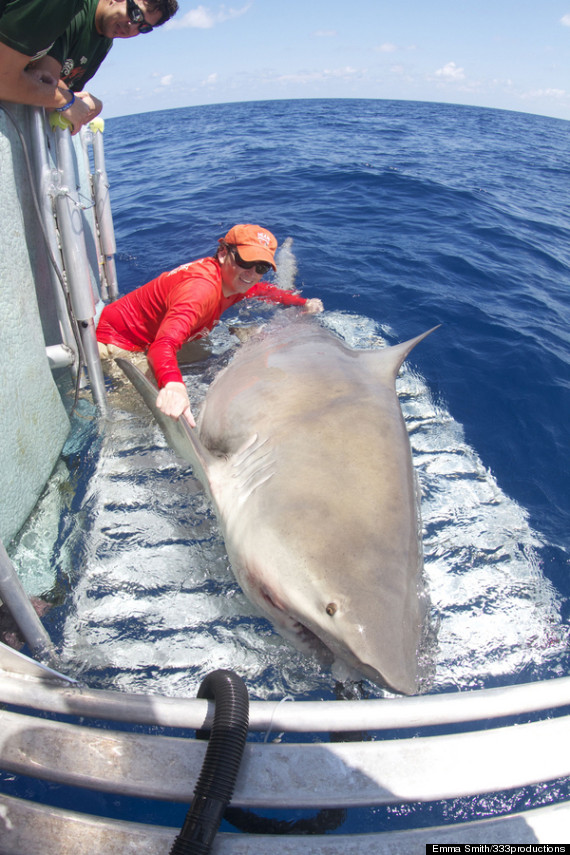 The huge bull shark, the top predator in the Florida Keys where it was caught, turned out to be a female, which are typically larger than males.

"As soon as it came to the surface, it literally took my breath away, it was so big," Hammerschlag said. They had hooked a massive bull shark, the region's top predator; the shark was about 10 feet (3 m) long and, the researchers estimated, over 1,000 pounds (454 kilograms). [See images of the bull shark.]

It turned out it was, in fact, a lady. Like many other shark species, female bull sharks are larger than males. But bull sharks of either sex are nothing to be trifled with. Like great white sharks and tiger sharks, bull sharks have serrated teeth — an accessory that allows them to rip and tear apart their meals, which means they can go after far bigger prey than smaller shark species can.

Bull sharks "have the most testosterone of any animal on the planet, so that should tell you a little something," Hammerschlag said. They also like to hang out in shallow, coastal waters.

Despite what this implies for our own species, Hammerschlag said the sharks don't specifically target people. "They possess the machinery but lack the motivation," he said.

Bull sharks are one of the three species most often blamed for unprovoked, deadly shark attacks around the world, according to the National Oceanic and Atmospheric Administration.

Yet far more commonly, people attack sharks. Their fins, prized for shark-fin soup, a traditional Chinese dish, fetch high prices. According to numbers cited by the Humane Society, as many as 73 million sharks are killed for their fins each year.

Overall, many shark species are facing steep declines. Figuring out what is driving that trend, and reversing it, is a big motivation of Hammerschlag's research. "We know a lot of shark populations are in trouble, but the question is, what is happening to Florida Keys sharks?" he said. "And if you want to be effective at conserving them, what would it take?"

Because they had run out of satellite tags — they're expensive — after taking biological samples, Hammerschlag attached a simple ID tag to the bull shark. They'd have no way of tracking the giant female. With a push, Hammerschlag sent the shark on her way. He said the experience wasn't scary.

"This is a predator like none other in the world, and it deserves complete respect and attention," he said. "If your heart doesn't skip a beat, you don't have enough respect for it."