Have you seen Superman -- the superhero, not the movie? If so, you should probably report him to U.S. Immigration and Customs Enforcement (ICE). After all, he is an undocumented immigrant.

"If humans can be considered illegal according to our immigration laws, then that must be applied to superheroes as well," Rivas explained in an interview with The Huffington Post.

Rivas, a Salvadorian-American graduate student at California College of the Arts, was inspired by his childhood love of comic books and history of activism.

"I started thinking about all these comic book heroes and how growing up it wasn't a big deal where these superheroes were from and where they would end up, what borders they crossed," Rivas said. "That experience and then the heated debate surrounding immigration policy in the U.S., it just made sense to me that I would tackle that issue and challenge the dichotomy of good and evil and, more specifically, immigration policy through these comic book characters."

Rivas' colorful 'wanted' posters, show popular comic book characters from DC Comics and Marvel -- the two brands Rivas read most as a child -- like Superman, Wonder Woman and Thor with "ILLEGAL" written beneath their photos.

In the fine print below, Rivas writes:

Super heroes who enter this country without proper authorization are breaking the law, plain and simple. These "illegal super heroes" are subject to deportation at any time. Their very presence is in direct violation of federal law. To report an illegal super hero, contact the San Francisco ICE Field Office - ISH Department. Their area of responsibility covers Northern California, Hawaii, and Guam. Officers in these divisions are obligated by law to make records of any reported "illegal super hero activity."

Inspired by photojournalists and documentary photography, Rivas sees art as a vital tool for social change.

But "Illegal Superheroes," which was on display at the Ramp Gallery in San Francisco, is just the first step. Next up, Rivas plans to establish a campaign for a speciality ICE unit for superheroes -- an extension of the ICE field offices -- in an exhibition.

Check out the gallery below to see Rivas' "Illegal Superheroes." 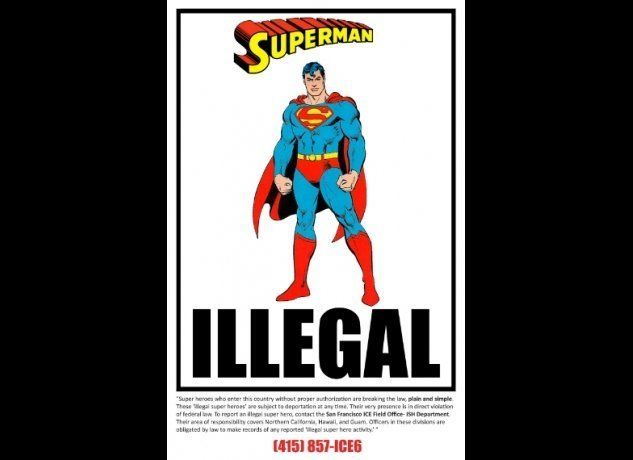 1 / 9
Superman
"Hello, you've reached the Illegal Super Heroes Department for the San Francisco Immigration Customs Enforcement Field Office. This is the report hotline for illegal super hero Superman. Superman, perhaps the most notorious of all illegal super heroes, is known to have entered the U.S. countless times illegally since his first appearance in Action Comics #1 (1938). He was born on the planet Krypton and has resided illegally in Smallville and Metropolis. He is suspected to currently be illegally present within U.S. borders. To make a report, please leave a detailed message after the tone. Thank you & God Bless America. " By Neil Rivas
Neil Rivas