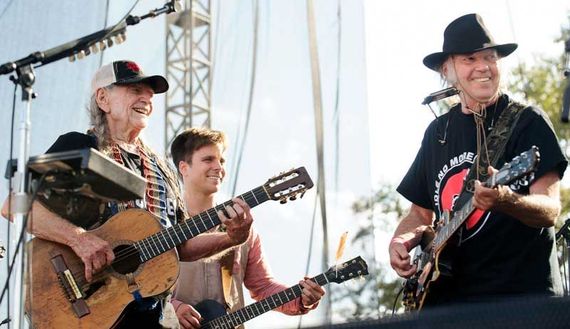 Harvest the Hope, a concert on the farm of Art and Helen Tanderup in Neligh, Nebraska, right on the proposed route of the Keystone XL pipeline, was many things: a musical tour de force starring Neil Young and Willie Nelson; an anti-pipeline message to President Obama whose election graphic formed the O of "Hope" on the stage banner, the word itself Obama campaign terminology; an artistic call to activism designed by artists Richard Vollaire and John Quigley whose crop design "Heartland No KXL" was plowed by farmer Tanderup into his corn field as he followed Quigley's direction, in an image spanning the size of 80 football fields; and "The day the idea of the Keystone Pipleline died" as pronounced by thousands of attendees who stood in rows like the corn and chanted in call and response with Quigley. 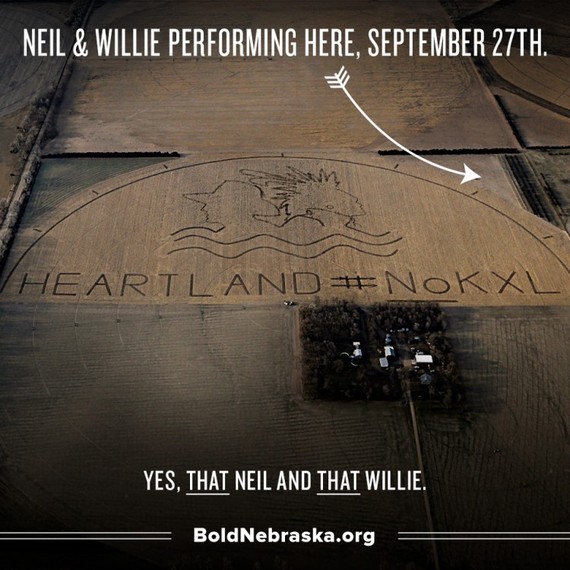 The Native American and Cowboy representatives of the Cowboy and Indian Alliance (CIA) held a small, private ceremony before the concert for Nelson and Young, burning sage for purification, chanting blessings, and wrapping the musicians in buffalo hides painted with native symbols including the snake, representing evil that must be stopped, in this case the pipeline. 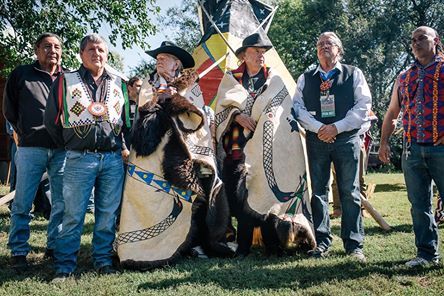 Micah Nelson, son of Willie, had the quote of the day: "KXL is the middle finger of the grasping hand of corporate greed." Neil Young expanded on this thought, telling the crowd of 8,000 standing at the farm that KXL is part of a bigger threat: the stealing of American rights by corporations:

"Farmers know what I'm talking about. They are fenced in on what seeds they can plant because of corporations. They used to plant their own seeds. Now they have to buy them every year from corporations who own the patents on the seeds. Corporations tell our leaders what to do. Thanks to Citizens United, corporations are considered people, but corporations don't have children and aren't concerned about the future they leave them. We have to stop the politicians who are bought by corporations and take back our democracy. Vote them out."

Young went on to say that unfortunately he can't vote here because he's Canadian. "I'm Canadian, and I know Canadian Bullshit," he said referring to the national origin of the TransCanadian Keystone XL Pipeline.

The CIA and Indigenous Environmental Network were represented by local farmers, whose farms sit on the proposed route of the pipeline, and members of several tribes who have been caretakers of the land for thousand of years. These representatives told the crowd that the choice is between oil and water. One farmer described the porous soil and the aquifer only about 70 to 150 feet beneath it. "When there is a spill, and it's not an if, there is always a spill, the water would be contaminated."

The fight to stop the Canadian pipeline from delivering dirty shale oil across America to be sold to other countries, has created powerful alliances between diverse groups that found common ground in protecting the heartland:

1. Americans and Canadians interested in stopping dirty oil (at this concert represented by Texan Willie Nelson whose tour bus runs on biofuel, and Canadian Neil Young, whose new album is a call to protect our planet and includes the song "Who's gonna Stand Up?" Susan Casey-Lefkowitz, director of programs at the Natural Resources Defense Council, spoke of the people of both countries standing up to our governments:

2. Native Americans and Farmers, represented by the Cowboy and Indian Alliance, interested in protecting the heartland of America from despoliation, who have taken their case to the Obama Administration;

3. Native American tribes, the Ponca and Lakota, once enemies, who have joined as warriors with a common interest in protecting land held sacred to them;

4. Landowners and Clean Energy Advocates who have built a barn that uses only wind and solar energy, right on the pathway of the proposed pipeline. Jane Kleeb of Bold Nebraska, and producer of the Harvest the Hope, said "Obama would have to knock down a barn built with clean, renewable Nebraska energy to let this dirty oil pass through, and he wouldn't do that."

5. Men and Women, Old and Young. Casey Camp, whose ancestors were forcibly removed from the Nebraska land on which the concert took place during the Trail of Tears, reminded the crowd that to her people, the earth is female, and that despoliation of her is a violation akin to rape. Frank Waln, A young Native American hip-hop artist entertained the crowd with a song to his mother, whom he serenaded on stage. Lukas Nelson, Willie's son who sang and entertained with his band Promise of the Real, said that he is proud to represent youth in protecting the earth.

6. And finally, Harvest the Hope aligned the past and the future, as land that witnessed the Ponca Trail of Tears 137 years ago when the Ponca were forced to leave by an American government that claimed the land the indigenous peoples had lived upon for thousands of years, is now again threatened to be stolen from the landowners of today by a foreign corporation and our government.

Nelson and Young have long collaborated on Farm Aid to protect the rights of independent farmers. The corporate threat to farms came up in the words of Young who spoke of the days when farmers owned their seeds, not corporations like Dupont and Monsanto. Native Americans who had lived on this land 137 years ago told of how they had returned to plant the native Ponca corn, gone from the farmland of Nebraska, on the land threatened by the pipeline to serve as sacred protection of the land.

"If one good thing came of the pipeline threat" said Cyril Scott President of the Rosebud Lakota Tribe, "It's that we have united as warriors for the earth and all our children. My people are warriors. This land belongs to no one. We are caretakers. I stand with the farmers, who are caretakers now, to protect this sacred land for all our children." 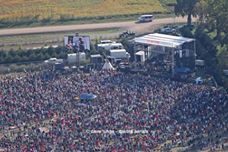