Neil Young and Jack White made history when they were guests on "The Tonight Show Starring Jimmy Fallon" on Monday, May 12. As part of the performance, Neil Young recorded a cover of Willie Nelson's "Crazy" straight to vinyl and distributed it at the end of the show.

Young recently recorded his latest album, "A Letter Home," in a 1947 Voice-O-Graph vinyl recording booth from White's Nashville-based Third Man Records, and he brought the same booth to Fallon's show. White told Fallon he had spent a decade looking for the machine and, after he found it, a year and a half renovating it. He debuted the booth at Record Store Day 2013. 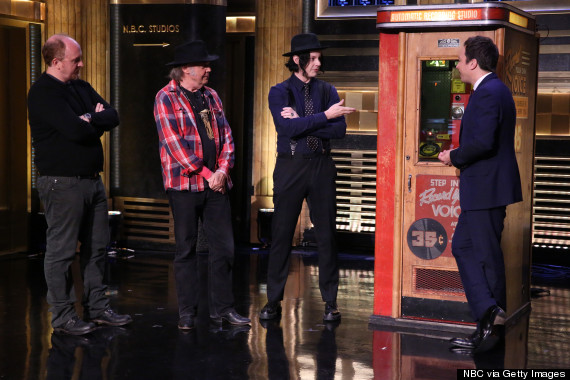 Fallon had tweeted the news a few hours before the live taping of his show, announcing that the performance would make history. "Neil Young is going to perform and press a vinyl with the help of Jack White live on the show. One take. Fun," he wrote. He then posted a photo of the final product.

Wow. That was fun. Neil Young singing "Crazy" on our show tonight!!! pic.twitter.com/DVR2LyGy2b