Neill Blomkamp is basically living every "Alien" fan's dream: the "District 9" director drafted his own concept art for a new entry in the beloved franchise, shared it on Instagram and has started the process of turning it into a movie.

Not that he can talk about it very much. "I won't give you any specifics," Blomkamp said in an interview with The Huffington Post about his latest film, "Chappie." What Blomkamp has said is that he wants the project to be "the genetic sibling of 'Aliens.'" Does that mean Michael Biehn's character Hicks -- who dies at the beginning of "Alien 3", but appeared in Blomkamp's concept art -- will return? "It's secret," he said.

Yet despite the clandestine nature of the new film, there is one thing Blomkamp is certain he wants to avoid: the "Alien" sequel becoming part of an even larger connected franchise.

With "Prometheus 2" and a new "Predator"" film rumored to be in the works, it seems at least possible that someone would want to put all the films together into a combined mega-universe, à la what Marvel has done so successfully with its "Avengers" films. Blomkamp wasn't into the idea.

"Christ, I hope not," he said. "To me, it’s all Ridley Scott’s world. I think on a creative level, combining any kind of Marvel-esque universe across all of the different franchises included in 'Predator' and 'Alien,' would be an egregious error." His "Alien" sequel remain a part of the Scott lineage. 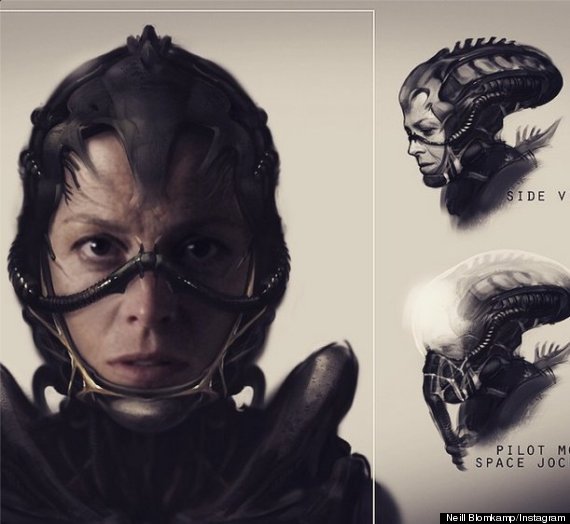 In the meantime, Blomkamp is promoting his latest film, "Chappie," which follows the creation of a thinking and feeling robot. The movie stars Dev Patel, Hugh Jackman and "Alien" heroine Sigourney Weaver, but gives major roles to South African rappers Ninja and Yolandi Visser (playing variations of themselves in the film), known collectively as Die Antwoord. Blomkamp came up with the concept for "Chappie" while listening to their music during pre-production on "Elysium." Their rave-rap music, combined with Blomkamp's interest in concepts of mortality and the difference between the soul and the mind inspired the new film.

"I have this interest in what is consciousness and what does it mean to be aware and be alive," Blomkamp said. The director went on to say that all of those existential ideas flourished when he was working on the futuristic Matt Damon film. "My idea of this consciousness, sentience, merged with some hyper-weird ideas about robotics and Die Antwoord raising an artificially intelligent robot from being a child." And that's exactly what happens in "Chappie."