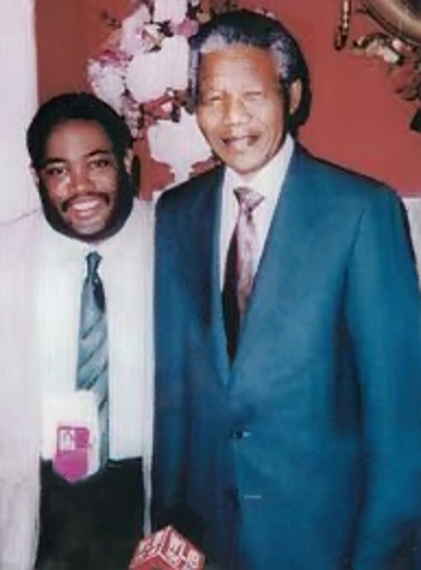 It was one of the moments I have cherished my entire life. The crowning achievement of a career. An audience with Nelson Mandela that first requires some initial perspective.

When you grow up in the Housing Projects of NYC, and where perhaps only a Dr. Martin Luther King Jr. could match his stature, you never think in a million years that one day, your world could collide with that of Nelson Mandela's.

As the world received word that Mr. Mandela had passed away, all I could think about was that I was thankful he was finally out of all his pain and what the 20-minute private faithful encounter with Mandela 23 years ago had taught me.

Mr. Mandela through his actions taught me to never have a defeatist attitude, to conquer your fears, and what believing in yourself can do. After all Mr. Mandela, after 27 years in prison, changed a nation and, in fact, the world.

The year of my encounter with Mr. Mandela was 1990. After being out of prison for five months, Mandela was headed to America for a historic 12-day, eight-city tour. His first stop was New York City. New York had just elected its first African-American mayor. New Yorkers prepared to treat Mandela as an adopted son, and the newly crowned administration of David Dinkins gave him first-class treatment. Here is how I discussed Mr. Mandela's life on RNN-TV Thursday night.

Mandela was given a parade along the Canyon of Heroes up lower Broadway in Manhattan. Major rallies for Mandela were in Harlem and at Yankee Stadium.

The security for Mr. Mandela was provided by more than 12,000 officers along with helicopters, boats along the banks of the East River, insulated bomb trucks, and sharpshooters. There was a "Mandela-mobile," similar to the Popemobile.

I will never forget the words of the now late NYC Deputy Mayor Bill Lynch, who handled the logistics for Mandela.

"Every reporter and their mother wants that interview," Lynch said. "Besides, Dominic, Mandela's staff will have a say in who he wants to talk with. I can't make any promises to you or anyone."

In the end, I will take to my grave that Mr. Mandela only did two interviews in New York, and besides mine was the one done with ABC's Ted Koppel. But I still beat Koppel to the punch because my interview aired first, while his was taped and aired later in the evening on a special edition of his highly popular show at the time, Nightline.

My interview was to take place at Gracie Mansion, which is the official residence for the mayor of New York, and where Mr. Mandela was staying during the trip.

After passing through a metal detector and walking past bomb-sniffing dogs, my team and I set up our radio equipment in a side room of the mansion. I didn't hear from Mayor Dinkins or Deputy Mayor Lynch, but I knew about when Mandela was to arrive because armed state department agents stood outside the door. After days of near panic, I told myself to focus. I reminded myself that Nelson Mandela was just another human being. But who was I kidding, this figure was an international icon.

Suddenly the doorknob turned and in walked a six-foot-tall, caramel-skinned man with a cherubic face. Mandela had opened the door and let himself in, just like that. I introduced myself and told him how honored I was to meet him. He was very gracious, calm, and soft-spoken. He sat down in a chair that I had set up for him. As I seated myself, I could hardly believe I was sitting across from the man who had almost single-handedly brought down the system of apartheid. Yet Mandela called me "Mister Carter."

A few months before, the entire world had watched as this man had been released from years in a maximum security prison, and now he was sitting in front of me. I had a few minutes to spare before the interview officially began, so I made small talk. "Mr. Mandela," I said, "you have just finished 27 years in prison, yet you don't seem to be angry."

Mandela smiled. "I could not be angry, young man, or it would have been giving in to those who jailed me," he said. "My anger would have destroyed me."

The radio interview went on, and then Mr. Mandela was gone. After all, an American nation awaited him.

I knew my life had been changed forever, having been in the mere presence of the man.

I was awed by Mr. Mandela's quiet confidence, which truly humbled me.

Mr. Mandela had a way of humbling the world.