Former South African President Nelson Mandela, who served 27 years in prison for anti-apartheid activities and led his continent into a new era, has died at age 95.

Much like Mandela's freedom fighting comrades, his tireless campaign for civil rights and peace was heightened by the sophisticated and proud sartorial manner in which he presented himself. While the former president of South Africa certainly wore plenty of custom-made suits, it was his traditional Madiba shirts that comprised his distinguished and celebrated signature style. The bold and colorful printed shirts, named after Mandela's African clan, became synonymous with the icon after he first debuted the look at South Africa's first democratic Parliament in May 1994.

"What Mandela has accomplished for South Africa--and for the world as a whole--was so staggering that it might seem insulting to put it in the context of style. But it would be just as insulting to ignore it," Zandile Blay, editor-in-chief of HELLO! Nigeria and adjunct journalism professor at Syracuse University, told The Huffington Post.

Mandela's fashion-forward flair combined with his revered political legacy not only influenced others to adopt his eye-catching style (even to this day) but also inspired entire clothing collections.

"We can't forget the essence of his struggle was affirming that the black African was just as much of a man as his white brother," Blay said. "Mandela's words and actions did this succinctly, but it was a wardrobe--as dignified and elegant and powerful as the man who wore them--which carried that message across visually."

With that said, as we mourn of the loss of Mandela and celebrate his enduring legacy we'd also like to take a moment to celebrate his incomparable style. Flip through the slideshow below to see some of his most bold and powerful looks. 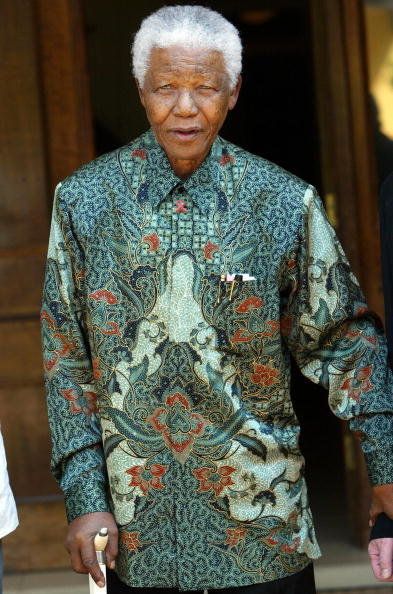 1 / 22
Nelson Mandela
TROMSO, NORWAY - JUNE 11: Nelson Mandela attends a photocall ahead of tonight's '46664 Arctic' concert, at the Rica Hotel on June 11, 2005 in Tromso, Norway. The fourth concert aims to raise awareness of and funds for the global HIV/AIDS pandemic, as well as funds for South Africa with proceeds going to the Nelson Mandela Foundation. Produced by Robbie Williams, it follows 3 previous concerts held in Cape Town, George and Madrid, and Mandela is expected to make a personal plea to leaders of the G8 summit in his address. (Photo by Dave J Hogan/Getty Images)