As I grew up on my continent, our own history was never told. Being a young girl raised in Benin, West Africa, I was even taught my ancestors were the Gauls!

At age nine, I discovered by accident the existence of slavery. I was looking at the cover of a Jimi Hendrix album and I asked my brother how you could be African and American at the same time. At fifteen, I had never heard about apartheid, unaware of much of the evils of this world when one day, as I was watching the Nigerian news on an old TV screen, I heard the voice of Winnie Mandela haranguing a crowd. My whole world collapsed as I learnt about the reality of the South African regime and the fate of Winnie's jailed husband, Madiba.

This injustice was so blatant that my first reaction was hatred. My blood was boiling. I took a pen and wrote my first political song, "Azan Nan Kpe." It was preaching vengeance and violence, wishing death upon all Afrikaners. Then I went out in our little courtyard and sung it in front of my family. Everyone was silent, tense. Then my dad, a tall and gentle man, took me apart and told me it was not right; music could not preach violence, not in our house. Music had a higher purpose: to inspire beauty, to empower people to be better. I had to take back my copy and rewrite the song. I went inside my bedroom, followed his advice and sung a world where there would be no more injustice, no more oppressed and no more oppressors.

In a way, what my father told me on that day was exactly what Mandela said when he got out of jail. He asked the South African people to rewrite their songs, to resist their first impulse. He said: Please do not to be defined by the prejudices of your enemies. You don't want to live burnt by fear and hatred like they do. The real freedom is to escape from the cycle of violence and war and all the games of power that will destroy you.

In 2003, around the first 46664 concert, almost thirty years after writing my first song, I had the unbelievable chance to meet him on Robben Island. I visited with him and other artists the very same cell in which he had spent so much time. At the end of the visit, when the photographers asked for a group photo, he was surrounded by all these superstars from Europe and America who had helped free him. I felt so shy and didn't know what to do but he grabbed my arm and asked me to stand next to him. He gently put his arm on my shoulder and smiled for the cameras. I knew by then that my world had changed for the better one more time. 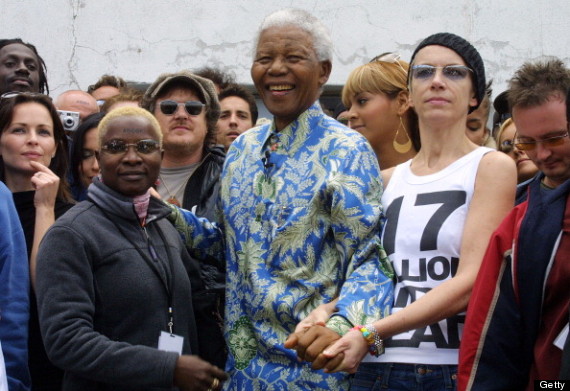 Thanks to him again.