The Union of Concerned Scientists has posted an informative breakdown on the connections between the winter storm bearing down on the Northeast and the planet's changing climate.

"It’s Cold and My Car is Buried in Snow. Is Global Warming Really Happening?," notes that storms like this one -- a classic Nor'easter -- are well-known to residents along the nation's North Atlantic coast. But shifts in the climate due in large part, most scientists say, to burning fossil fuels, are likely to make such storms even more fierce and frequent.

Rising ocean surface temperatures already have increased the temperature and moisture content of the air passing over the United States, setting the stage for heavier snow and rain storms. Global warming has increased the risk of dumping heavier precipitation -- as rain or snow -- over most land regions that experience storms. 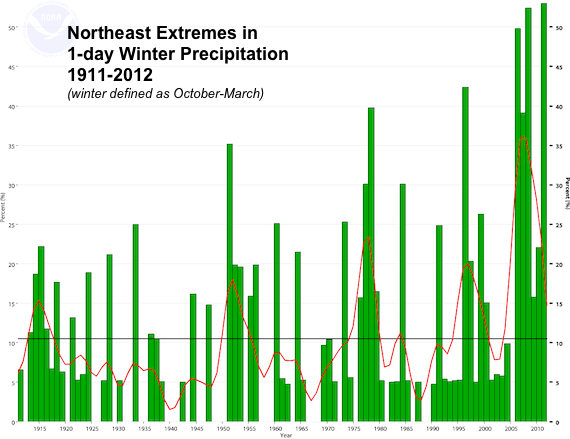 The UCS web site goes on to describe just how changes in climate -- a statistical phenomenon measured in decades and centuries -- can affect weather, or what you see and experience when you walk outside.

It also explains, in response to climate contrarians who routinely ask the question behind the title of the UCS post, why the continuation of cold weather and winter storms does not refute fundamental climate science.

The seasons we experience are a result of the Earth’s tilted axis as it revolves around the Sun. During the North American winter, our hemisphere is tilted away from the Sun and its light hits us at a different angle, making temperatures lower.

"The choices we make today can help determine what our climate will be like in the future," the scientists note. "Putting a limit on heat-trapping emissions, encouraging the use of healthier, cleaner energy technologies, and increasing our energy efficiency are all ways to help us to avert the worst potential consequences of global warming, no matter what the season."