Nemonte Nenquimo wore a bright crown of blue, yellow and red macaw feathers that, for the Waorani people of Ecuador, represent the power of women in the forest. But her suntanned face looked tired.

It had been a whirlwind 48 hours since Time magazine named the 35-year-old Indigenous activist one of its 100 most influential people of 2020. Peering into her computer screen, she smiled and said this was her 26th media appearance, discussing her fight to protect 180,000 acres of virgin forest in northeast Ecuador from drilling, mining and logging.

The spotlight is uncomfortable for Nenquimo. Indigenous people, she said, aren’t used to individual appearances; they always lead collectively. Their decisions and opinions are communal. Yet now she finds herself on the global stage representing not just her people, but all Indigenous peoples fighting deforestation, genocide and destruction around the world.

Nenquimo, whose first name means “constellation,” was born into a tribe where both women and men serve as warriors. Her grandfather was a leader who defended what is now known as Yasuní National Park, one of the most biodiverse rainforests on Earth.

HuffPost spoke to Nenquimo in Spanish about her activism. This interview, translated into English, has been edited and condensed for clarity.

How did you learn that Time was including you on its annual list?

I was working for the Coordinating Council of the Waorani Nation of Pastaza (Conconawep), which I lead. I’d been planning to have volunteers provide lectures in the territory because, during the pandemic, education has been abandoned, as there’s no internet or phone lines available for online learning. We were making plans, coordinating meetings, then I suddenly received the call.

It made me feel that it was recognition for those who are already dead, but also for those who are alive and fighting. I felt very encouraged, I felt strengthened to continue fighting. We have lived free and happy. We don’t want any more contamination or death from disease. Our message is that capitalism destroys the whole planet; it contaminates, it extracts. They don’t realize that they are leaving nothing for future generations. We, the Indigenous people, know that we have to be the keepers, and we have always done it.

How have Ecuador’s Indigenous communities fared in the pandemic?

When the pandemic arrived, the Ecuadorian government didn’t respect the communities where the Waorani people live and didn’t stop the oil activities. This was the first time COVID-19 was transmitted and spread to other communities because, in Waorani culture, we are collective and collaborative. This caused the spread [of COVID-19].

Men were sick, they were unable to go out hunting, they stayed in their hammocks shivering. Women were shaking in the hammocks with the children in their arms; they couldn’t go out to look for cassava, food; it was very difficult, very hard. But with the knowledge of the plants, they began to heal. Most of the grandparents were saved. As a leader, I was worried. I said, “nobody goes in and nobody goes out into the jungle,” but the virus came.

I went to seek help, support from other organizations, because the Ministry of Public Health didn’t have that priority. In that attempt to help my people, I became infected and sick. I lost my sense of smell, I couldn’t taste, and I lost my memory. I was ill for about 14 days. I went into the jungle for eight days and came back healthy. Now my concern is the consequences of the disease.

What has been the most frustrating moment of your work so far?

The pandemic. It was something new. I had never felt weak or sick before, but I felt that I was going to die. I was breathless, had a high fever and chest pain. My throat felt swollen. I had to face the possibility of dying and not knowing who my daughter would stay with. It shattered me.

You have said that you began to fight for the Waorani future with strength and rage. What was your awakening?

When I was a child, my father used to tell me that my grandfather had a lot of love for the forest. That love was transmitted to me. The jungle has given me freedom, strength. I was shocked when I saw with my own eyes the impact of the oil companies on the territory of the Cofán and Siona brothers, and I listened to their testimonies. They didn’t know the consequences of the oil spills in the rivers; they bathed in that black water without knowing how that would affect them. I know of cases of children dying from it.

That gave me the courage to protect the 180,000 virgin acres that we have in the Waorani community of Pastaza. We don’t want a reoccurrence of the story that the northern brothers experienced.

The actor Leonardo DiCaprio nominated you for the Time list. How did you two connect?

Before becoming a leader, I founded the organization Ceibo Alliance with  Indigenous people in Lago Agrio (in northern Ecuador’s Amazon), where the first contact with the oil company Chevron happened. … I was working on the creation of rainwater systems, solar panels, exchange of experiences, and made connections with other organizations that came to work in Lago Agrio. In 2017, DiCaprio invited me to a presentation by his foundation. I traveled to San Francisco, California, and I met him personally. He’s a good man, he has a good heart, and he supports us even through distance.

I’ve seen how the monster of oil extraction has come to destroy life. Leo and I have talked about how the government does not respect our right to life, there is no support, what we do is for the life of our children. I hope that soon, he’ll come to visit the territory we preserve.

Without government support, who finances the struggle for the forest?

Small conservation groups have helped our organization raise money. Now we are looking for alternative ways to provide programs in the territory that focus on education and leadership. We will continue to look for resources to make alternative, sustainable economies. Most of the time, we don’t ask the government for help; when I do, they ignore us.

Has this struggle involved risks in your life?

Capitalism always wants to devour, to devastate. If we go out to defend our life, our home, it is a very dangerous risk. They realize that we go out to protect, and they can kill, discriminate. My family is very big. My grandfather had three wives, 20 children. In the territory, we are a large majority. I’m not the only one. I’m not afraid of dying. If I die, it’s for the sake of the future.

Have you been threatened?

I haven’t been threatened. But it’s a fact that women who protest have been annihilated all over the world.

How has the forest changed since you were a child? What will it be like when your daughter is an adult?

I don’t think anything has changed. Recently, I’ve seen only one change: There was a lot of rising water that has concerned me because it’s a consequence of climate change, of logging, of the imbalance of the planet. There are also very high temperatures in the Amazon, and that’s also linked to deforestation.

If we keep fighting collectively, the Earth will remain as such, full of animals, fish. If we don’t protect it, the forces of capitalism will come in and destroy us. The jungle will disappear.

Desirée Yépez
On Assignment For HuffPost
Suggest a correction 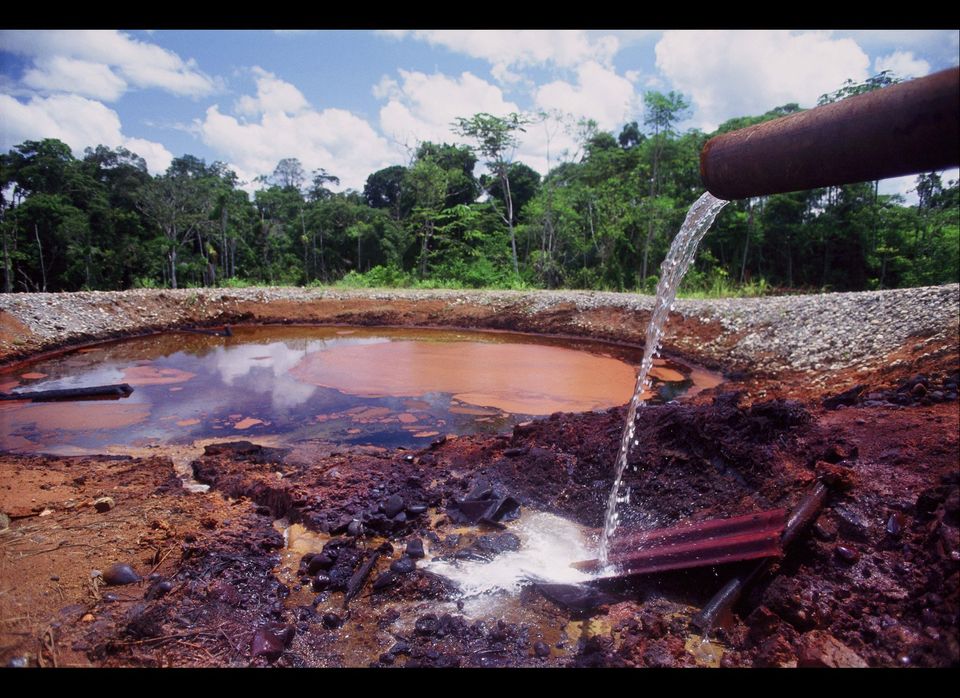