Boris Nemtsov has been dead for less than three days. During this time, the media and blogsosphere have understandably gone into overdrive in the attempt to figure out exactly what happened. Journalists are trained to answer the key questions "who, what, when, where, how, and why", but the most important ones in this case (who and why) are obviously at the center of the most intense speculation.

We will never really know. 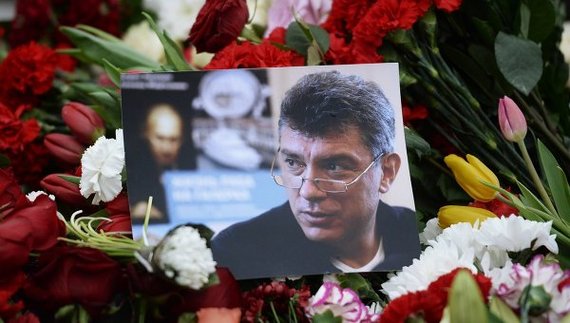 We will never know, and the reasons we will never know can be found in Nemtsov's own personal and political trajectory, and in the very manner in which he was killed. Nemtsov's life and death show us the limits of knowledge in Putin's Russia.

Before Nemtsov's body could even be moved from the bridge where he met his death, the Kremlin's team rushed to call his slaying a "provocation." We see this word in so much of the English-language reporting, where it stands out like a sore thumb. It is a relatively rare word in English; at least, it is not a word that has entered common use in our own rather poisoned political discourse. In Russian, however, "provocation" deserves its own keyboard shortcut, since the word is used across the political spectrum to discredit anything that might make the speaker look bad.

"Provocation" means "If it looks like I did it, that's precisely because I didn't, but my enemies want to make it look like I did." In other words, it's a set-up. This has a certain schoolyard simplicity to it, and renders every possible crime a sin without a sinner.

Putin and the Usual Suspects

Let me get this out of the way: I don't think Vladimir Putin gave the kill order while sitting in his plush Kremlin office, stroking a cat and admiring the pet sharks he keeps in a pool behind his desk. Putin has little to gain and much to lose from the murder of a man whom he had successfully marginalized for over a decade.

But the speed and intensity with which the Kremlin and its allies in the Russian media have argued not only this point, but also the proposition that the Western media will immediately and lamentably leap to assumptions of Putin's guilt, are about more than simply the logical case that is to be made. In their telling, Putin's regime immediately jumps from suspect to victim, in a process as sublime as the sudden transformation of a solid into a gas. For years now, the official Russian media have excelled in demonstrating that the Russian Federation is both a magnificent hero and constant victim.

In the absence of facts, the speculation about possible culprits says far less about reality than it does about the speculators' worldviews. Oppositionists propose rogue elements in the security forces, or perhaps Chechen President Ramzan Kadyrov (largely because this seems like exactly the sort of thing Kadyrov would do). On the nationalist right, we see many of the usual suspects, from a CIA/NSA co-production to outraged jihadists punishing Nemtsov for his support of Charlie Hebdo (because of course, this one recent moment in a decades-long career is the first thing anyone thinks of when they think of Nemtsov).

Liberals and Other Folk Devils

The biggest target, though, is Russia's liberals themselves. Liberals in Russia are commonly assumed to be guilty of such a wide range of sins that even Fox and Friends might suspect bias.

This time, liberals are said to have committed that old standby of Russian conspiracy theory, the "sacred victim." That is, they kill their own to make the enemy look bad. The lack of evidence is not a problem; instead, it's a theory that works if you already think of liberals as the devil. And it even has roots (twisted though they are) in the Russian literary tradition (this is why the protagonists of one of Dostoevsky's last novels fit comfortably in a book called Demons).

Liberals are also prematurely (and, I sincerely hope, incorrectly) engaging in that old sport of seeing Russia as a nation that is always doomed to repeat its terrible past. It has been just over 100 years since the assassination of Leningrad party boss Sergei Kirov, an event that led directly to Stalin's bloody purges (and a crime that is often laid at Stalin's doorstep).

What are the parallels? A handsome, charismatic quasi-rival has been killed. So far, that's really it. If things get even worse, there will be plenty of time to paint Nemtsov's death as a sequel to Kirov's. At this point, though, it seems to be a matter of taking something terrible and turning it into something even worse. Nemtsov's death deserves to be lamented for its own sake.

If we do want to ponder the broader significance of Nemtsov's life and death, as I promised just a few paragraphs ago, we need not go as far back as the 1930s. Instead, the Nemtsov story is that of the increasing irrelevance of facts within Russia's broader ecosystem of information.

Since leaving the corridors of power, Nemtsov devoted himself to exposing the corruption of the Putin regime. In the run-up to last year's Olympics, Nemtsov produced a comprehensive, damning report on the appalling scale of corruption and personal enrichment that went into the construction projects in Sochi. Just before his death, he was about to release a similar report providing proof that Russia has been directly involved in the fighting in Eastern Ukraine.

It is this investigation that provides some possible proximal cause for the regime to assassinate him. But to believe that is to forget one very important thing: nothing in that investigation was going to change the current political equation. The information context in contemporary Russia renders all such revelations irrelevant.

In the Russian media, crimes and criminals are exposed all the time: American plots, NATO plots, Fifth Column plots, and, of course, Ukrainian plots. One of the reasons the 1930s is an inappropriate model for Russia today is the stark contrast in information environments. Stalin restricted information, while today's Russian media constructs and conveys information in such a quantity that any "real" revelation is drowned out. It is all but impossible to distinguish signal from noise.

By the same token, the very public manner in which Nemtsov was killed shows the sad irrelevance of news, transparency and facts. There were numerous opportunities to kill Nemtsov in a stairwell or underground passage (he rode the metro frequently), but instead he was assassinated on a bridge that is under constant surveillance. Moreover, Nemtsov himself was probably also under surveillance (as opposition leaders usually are in the run-up to a demonstration). Yet we are left with a mystery.

This may be one of the most transparent public killings of our time, and yet evidence is hard to come by. Nemtsov was shot four times in the back. Even when there is a smoking gun, there is no smoking gun.